House of the Dead: Overkill was originally for the Wii and had some success using the Wii’s claim to fame: motion controls. Years after its release Sega decided to remake it in HD for the PS3 Move. Was the remake a success? Let’s find out

First we’ll cover some of the playable modes for the game.

Story mode: This mode lets you play through 9 levels of “mutant/zombie” killing action which were taken from the original Wii release.  Once a player has passed a level they can go back to it and play it with extra mutants or at a harder difficulty.

Directors Cut: This mode is exclusive to the PS3 version of the game. It allowed the developers to make improvements and challenges to the original story mode. The player is put in more challenging situations and as a result each of the 9 levels takes a bit longer to complete. 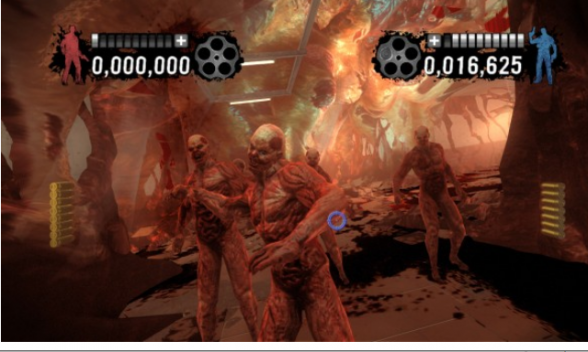 Mini Games: There are also 3 mini games present in House of the Dead: Overkill.

Victim support: In this game mode you will have 2 minutes to protect civilians from the mutants and the goal is to let them leave through some green doors located at the end of the room.  This mode is quite fun to play with friends, since it becomes quite hectic with more players. Each player will be assigned a color and they will have to protect their individual civilians from the mutants. What I found is the mutants do pose a danger to the civilians but the biggest danger to them is the player and his guests. Many times I have “accidentally” shot my civilians or friend’s civilians trying to save them from the claws of the mutants.

Stayin’ alive: This mode is the classic survival mode. You will have to battle wave after wave of mutants until you die or  time runs out. If you’re hardcore about survival games though, this might not cut it for you.  The more players there are the easier it seems to be. However, if you enjoy racking up points and competing with friends to see who can get the most kills and who has better accuracy this might just be for you.

Money Shot II: This mode is personally my favorite of the 3 mini games. This mode is the classic carnival arcade shooter. Targets will be moving from one side of the screen to the other challenging the players to shoot the targets and not the bombs. Accuracy is rewarded as usual with higher points and as the mini game progresses the random paths the targets take become quite challenging. This game mode can be enjoyed by a single player but as always it will be better with more players.

NOTE: The entertainment value for me and my friends got a lot better once we started adding punishments, challenges or handicaps to the mini games. Be creative here and have fun with your friends.

The story mode and directors cut mode can be played with up to 2 players. The mini games can be played up to 4 players at once. It is one of the few move games I have found that is compatible with 4 players for both the move and the PS3 in general.

Throughout the game you will also be challenged with finding and shooting collectibles. The collectibles will unlock comic book pages, original in game music, concept art and 3d models.

For the casual gamer, I’d recommend House of the Dead: Overkill. Keep in mind this really isn’t the kind of game with the intricate, complex, storyline. No. It’s one of those mindless shoot ’em up games that’s meant to give you a couple hours of mindless zombie destruction and I think Sega has succeeded in that aspect with this game. Additionally, on a sidenote, the mutants aren’t too scary which is good for the younger gamers out there or if you plan on buying it for a niece or nephew. (NOTE:  There were 2 things in the game that were kind of freaky but nothing really traumatizing. =D)

As for fun factor, I think overall it’s a very fun game and can be enjoyed both singleplayer or multiplayer. Especially for those who enjoy multiplayer games, I think this is an excellent party game addition to any PS Move library. While this is much more fun with 2 or more players, personally I liked the single player experience a lot. Sega has included a large arsenal of upgradeable weapons, extra mutants and the ability to dual wield guns which really hits the spot for that mindless single player zombie blasting action you need from time to time. If you enjoyed blasting mutant brains across the screen with one gun, you will undoubtedly enjoy doing it even more with 2! I sure know I did. Otherwise, the multiplayer aspect is as you’d expect – awesome. What’s better than mindlessly blasting zombies all by yourself? Well how about blasting them with friends! 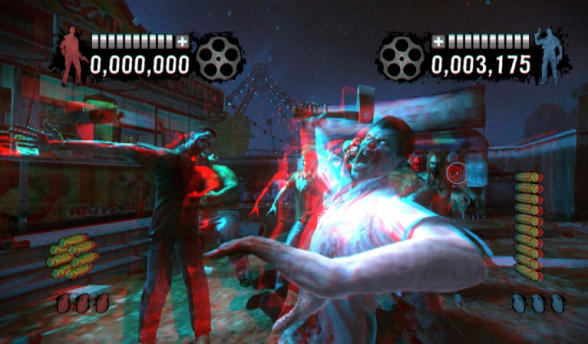 House of the Dead: Overkill is currently available at Amazon.