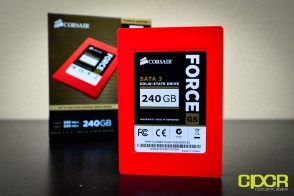 While it’s very much preferred to be an SSD manufacturer who also produces their own NAND, there are some advantages to not doing so. One of those advantages is that you’ll be able to offer a much wider range of SSD products which can cater to a larger majority of customers. Whereas SSD manufacturers with their own NAND fabs such as Intel, Micron/Crucial, SanDisk and Samsung are likely to use their own NAND, they’re more limited to offering maybe one or two products – one geared towards enthusiasts and one towards the general consumer.

On the other hand, companies without their own fabs such as Corsair, OCZ, and Kingston are able to offer a huge variety of SSDs, each catered towards a specific need. While this may simply be a survival tool for these companies as they can’t control NAND supply, at the end of the day it sill does give consumers a lot more variety and choice.

That said, today we’ll be reviewing of those “choices” from our friends at Corsair, the Force Series 240GB SSD. The Force Series GS (or Force GS in short) is one of Corsair’s latest SSDs to hit the market and it’ll be using a fairly proven combination of both the SandForce SF-2281 controller along with some of SanDisk/Toshiba’s top of the line 24nm Toggle Mode MLC NAND. For those who closely follow the SSD market, this configuration is near identical to the already very fast SanDisk Extreme SSD, which we reviewed near the beginning of this year.

In terms of target market, Corsair is targeting the Force GS at the enthusiast crowd as this SSD is tiered right above the SandForce SF-2281/25nm IMFT synchronous NAND based Corsair Force GT, a product that’s also geared towards enthusiasts as well.

A Closer Look at the Corsair Force GS 240GB 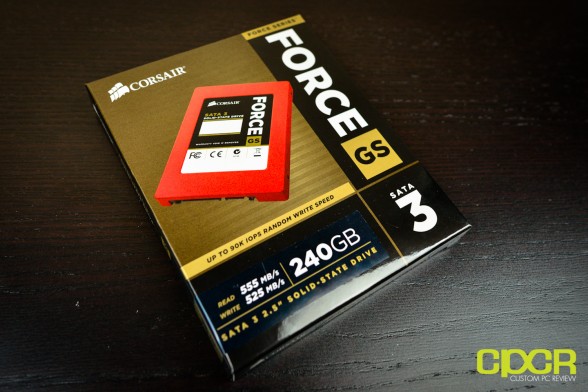 Here we get the usual Corsair type of packaging for the Force GS 240GB. Corsair is advertising up to 555 MB/s sequential reads and 525 MB/s sequential writes, which is the norm for most high performance SandForce drives. 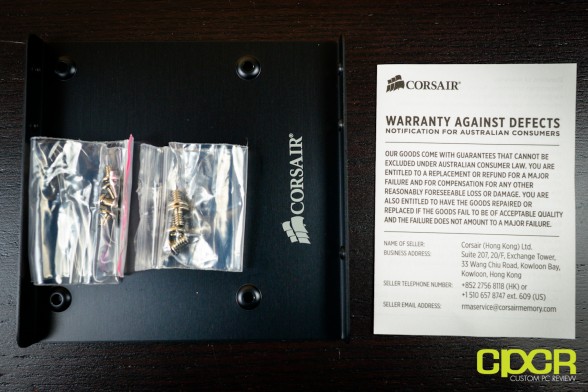 Along with the Force GS, Corsair has also included a 2.5″ to 3.5″ adapter, some mounting screws, and some warranty information. 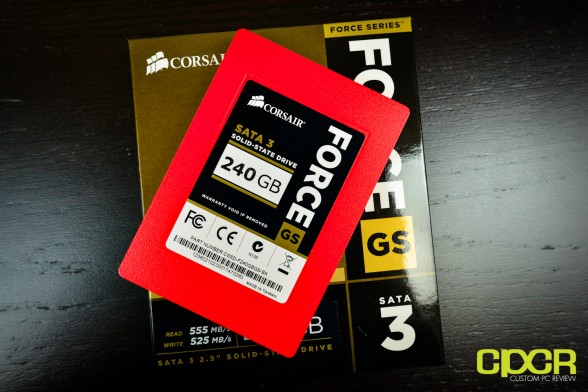 Here’s a look at the top of the Force GS. We’ve got a warranty void if removed sticker up top along with some information about the SSD’s capacity, model number, and other identifying information. The entire casing is constructed entirely of metal and the red, black, gold color scheme instantly tells you that this is going to be a high performance product. 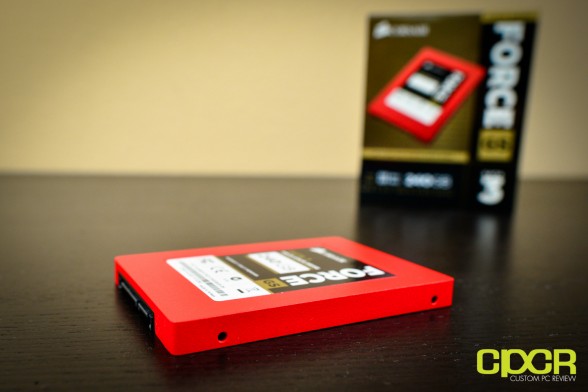 Along the sides of the Force GS, we get mounting screws for mounting the drive into notebooks. Corsair has also opted to go with the 9mm thickness, so it’s only compatible with notebooks that support the thicker profile. 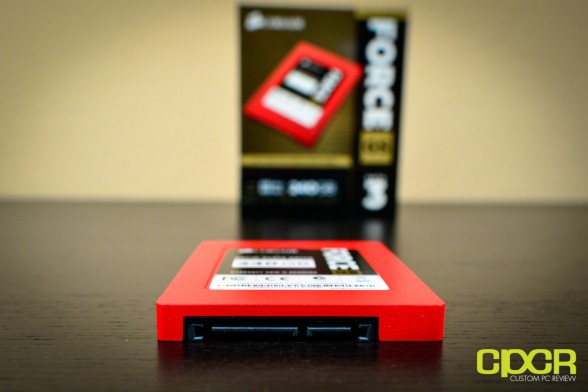 Here’s a look at the connectivity options on the Force GS. We’ve got SATA 3 6Gb/s along with SATA power, so nothing new here. 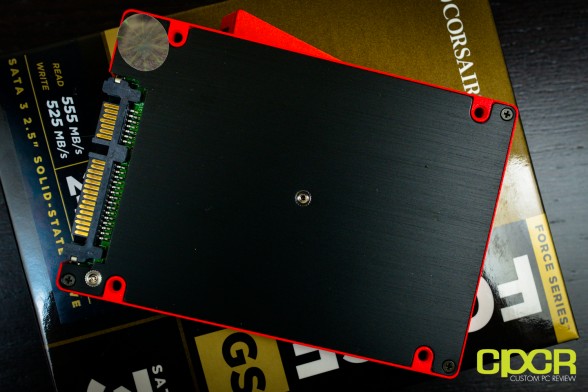 The bottom of the Force GS is constructed of a beautiful black metal casing. It’s also got the 4 standard mounting holes here as well. Let’s take a look at what’s inside.

A Closer Look at the Corsair Force GS 240GB 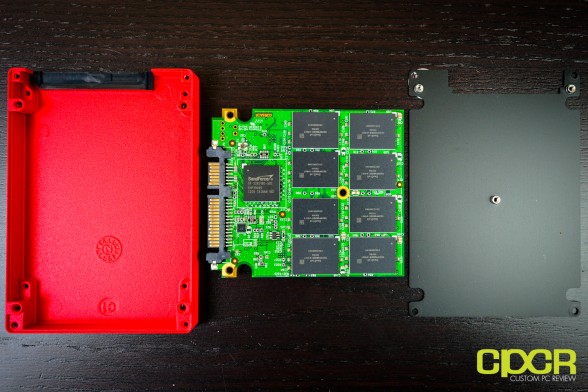 Removing a couple Phillips head screws, we crack open the casing to find a slightly undersized PCB holding all the ICs for the Force GS. This is more than likely a cost cutting measure as smaller PCBs will cost less to produce. 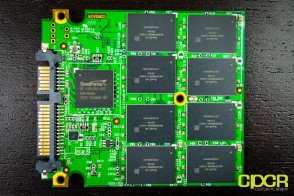 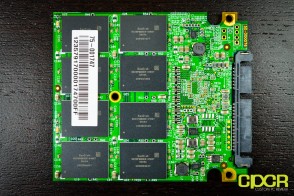 Despite the smaller PCB, Corsair is very efficient in using all the space rather than wasting a lot of space with a larger PCB. In total, we’re going to be getting the controller along with a whopping 16 x 16GB NAND packages (8 front, 8 back), which will ensure that all of the controller’s channels are used in order to maximize performance. As 16 NAND packages x 16GB each is 256GB, 16GB is used for overprovisioning. After formatting, a total of 224GB is available. 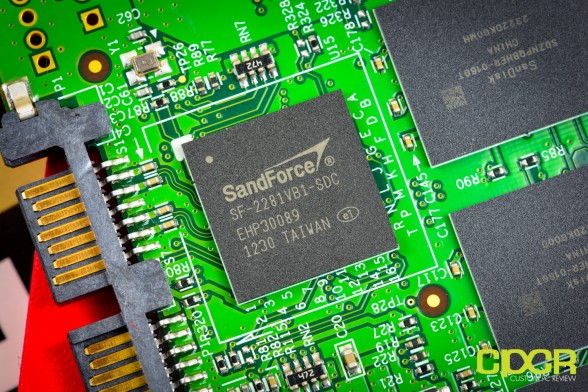 Here’s a closer look at the controller Corsair has chosen to go with for the Force GS. What we’ve got here is the SandForce SF-2281VB1-SDC controller, which is one of the most common SSD controllers out there. That said, because of how common it is these days, it’s also relatively inexpensive to purchase, which will help reduce the cost of this SSD. 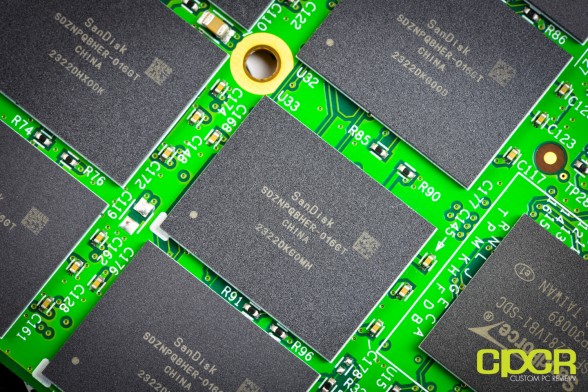 The specific NAND used here is the SanDisk branded SDZNPQBHER-016GT. This stuff is quite similar to the 24nm Toggle Mode MLC NAND we saw in the SanDisk Extreme, but they carry different model numbers, so I’m assuming what we have here is something different, just not entirely. 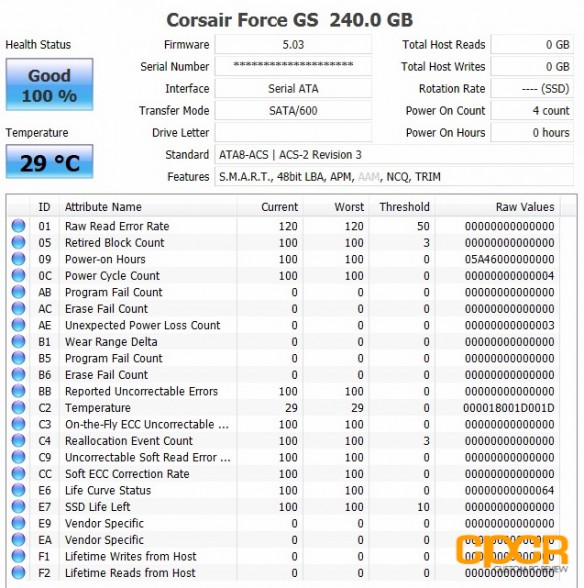 Before we move onto the performance section of the review, I’d like to turn your attention to the firmware version for a second. Yes that’s right people, we’ll be testing the Corsair Force GS 240GB with the 5.03 firmware. For those not in the know, the 5.03 firmware is the latest SandForce controller firmware, which among other things fixes TRIM – a feature broken since firmware 5.01/5.02. For those still running on firmware 5.01/5.02 or older, please visit the Corsair forums to download the update.

As expected, the Corsair Force GS 240GB dominated ATTO Disk Benchmark putting up 500+ MB/s in both sequential reads and writes from both smaller and larger queue depths. For a SandForce SF-2281 + MLC Toggle NAND based SSD, did anyone expect to see anything less?

Moving into Crystal Disk Mark then, we can immediately see that what we have here is a SandForce based product given the huge disparity in performance when using compressible (left) vs incompressible (right) data sets. While this was expected, one thing I’d like you to take notice of is the blazing fast 4K read/write results seen here. No SandForce based SSD has gotten anywhere near 145.7 MB/s in incompressible 4K writes. Until now. 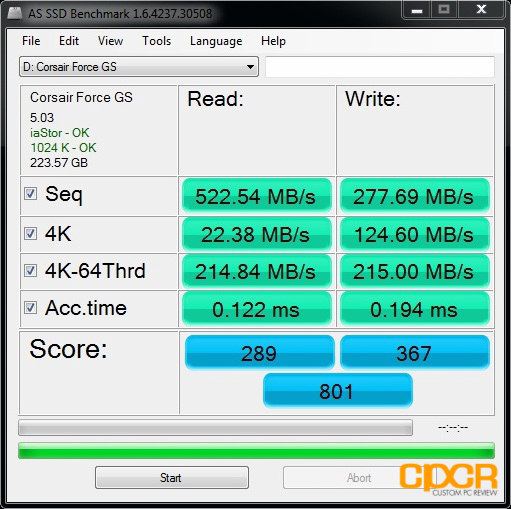 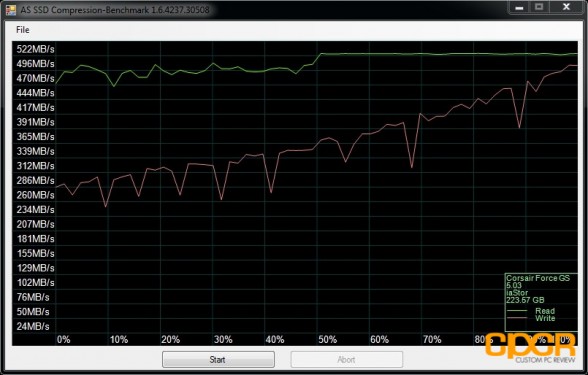 Also important is the compression benchmark which gives us an idea of performance based on how compressible data being read/written is. As a SandForce drive, we can see that while reads are fairly consistent over the entire range of compression, writes increase in performance as data becomes more compressible. 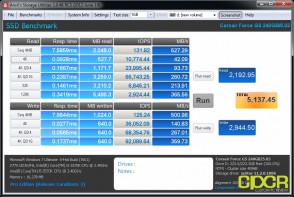 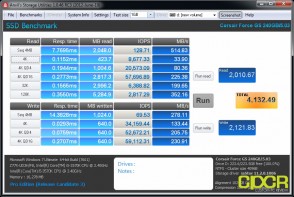 Again we see some pretty good numbers here with Anvil Storage Utilities. Looks like the Corsair Force GS 240GB will probably end up right at the top of all SandForce drives on the market. Let’s continue to see some PC Mark 7 real world testing results. 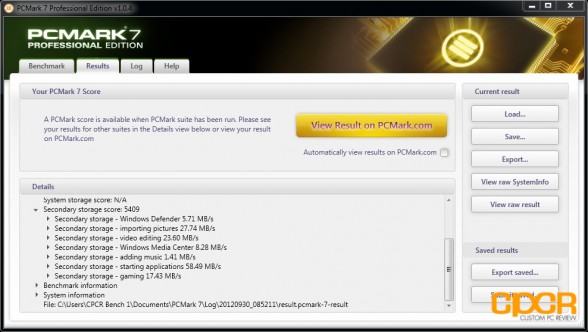 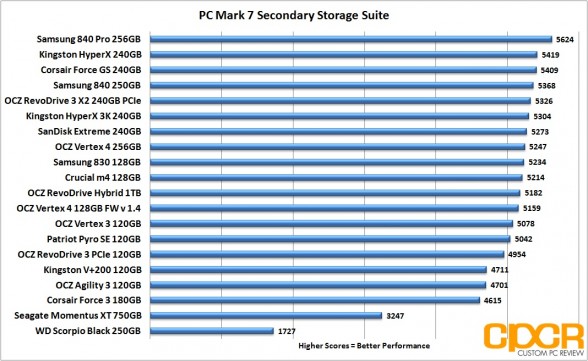 In PC Mark 7, the Corsair Force GS 240GB is very fast, coming in right behind the newly introduced Samsung 840 Pro and the Kingston HyperX 240GB also with SandForce 5.03 firmware. 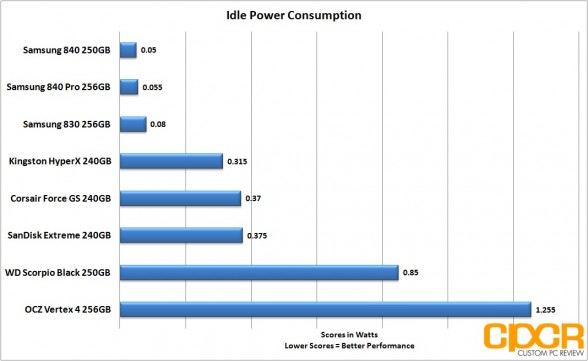 With the Corsair Force GS 240GB, I was able to get the idle power consumption down to 0.37W, which is near identical to the power consumption for the SanDisk Extreme 240GB. This isn’t much of a surprise since both SSDs use 24nm SanDisk/Toshiba Toggle NAND and the numbers are within spec as Corsair rates the Force GS at 0.6W maximum during idle. Of course, none of the SandForce based drives come anywhere near the power efficiency of any of the Samsung drives, which idle at 0.08W or less. 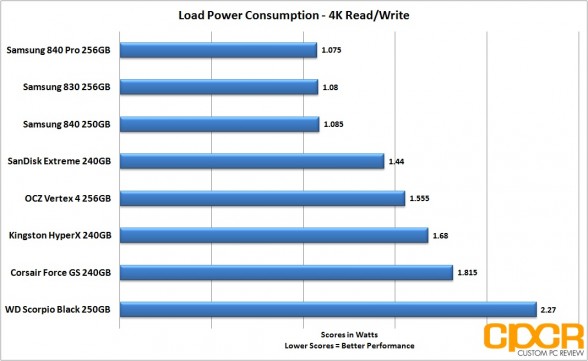 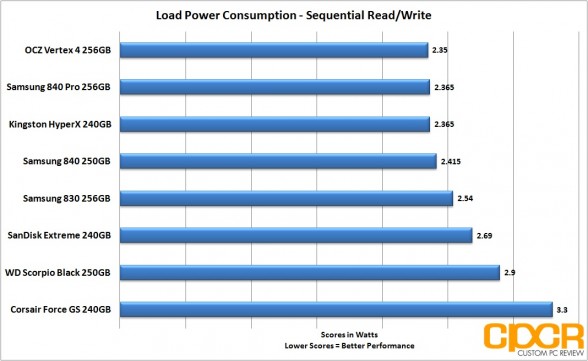 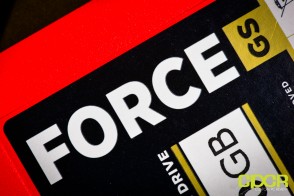 What was very interesting though is just how fast 4K performance is in both incompressible and compressible data sets. In all benchmarks ran today, the 4K writes hit a very respectable 120+ MB/s. I haven’t seen this type of performance from any SandForce based SSD on the market and is more than likely partly due to Corsair’s use of fast Toggle Mode NAND along with performance enhancements contained in the new SandForce 5.03 firmware. In our PC Mark 7 benchmark, the Corsair Force GS came in as the third making it one of the fastest SSDs we’ve ever tested to date.

While performance is impressive, it’s also important to note that power consumption under load is quite high, reaching about 3.3W during constant sequential read/writes activity. While this is not a consideration for desktop users, those looking for a new notebook drive should take the higher power consumption figures into consideration. Even an extra watt of power draw could mean a lot when you’re on a battery.

Current pricing on the Corsair Force GS 240GB is $209.99, which places it right around $0.87/GB. While this isn’t the cheapest option out there, it certainly isn’t the most expensive either. Considering how fast this SSD is and the fact that Corsair is aiming this product at the extreme enthusiast category, it’s quite nice to see that they haven’t gone overboard with the price. That said, I’m not too convinced there’s any reason to take the Force GS over the older Force GT, but at a difference of only $10, there’s not a huge reason not to either.

Warranty on the Force GS is a very standard 3 years and those who’ve dealt with Corsair customer service will know that it’s generally going to be a pleasant experience. However, it would be nice to see Corsair jump into the 5 year warranty bandwagon especially with other vendors such as Intel, OCZ, and now Samsung in the mix. One of the big reasons for Corsair’s success in the power supply market is because of their industry leading 7 year warranty, which I think speaks volumes on a company’s faith in their products.

At the end of the day, the Corsair Force GS 240GB is yet another ultra high performance SandForce based product with proven components at a reasonable price. Power consumption is higher than expected and warranty is only a standard 3 years, but those looking for a fast SSD backed by the Corsair name, the Force GS 240GB is a product worth recommending.