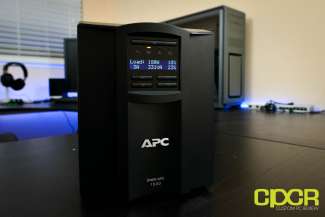 For mission critical business systems, UPSes are a critical necessity as a single brown out, power surge or power outage could easily cost thousands of dollars worth of lost time, lost data and damaged equipment. Despite the fact that UPSes are an obvious necessity, it’s always a surprise to find many businesses that rely on nothing more than a simple surge protector or PDU to power their servers and workstations.

Looking at the specifications, the APC Smart-UPS 1500 (SMT1500) sits in the middle of the Smart-UPS lineup, designed to protect maximum loads of up to 1000w, or 1440va. The SMT1500 features the ability to output a true sine-wave which provides greater compatibility with more sensitive electronic equipment and can be centrally managed through a network with the purchase of an optional SmartSlot card. 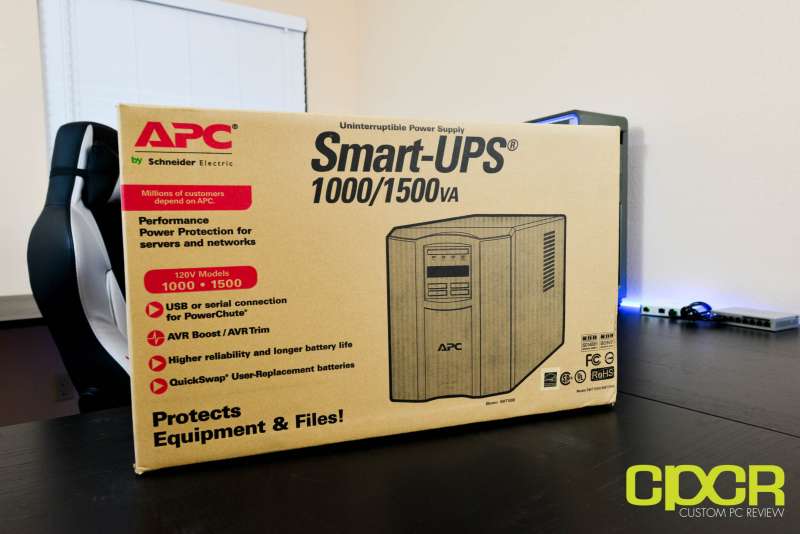 Here’s a look at the packaging for the APC Smart-UPS 1500.

Accessories included in the packaging include documentation, a USB Type-A to Type-B cable, a serial cable, software, and a testing report.

At the front of the unit is five buttons: power, escape, enter, up arrow and down arrow. At the rear there’s a USB Type-B port, a serial port, a SmartSlot interface, a battery disconnect plug, and eight standard power ports in two groups. By grouping the power ports, this allows a tiered shutdown sequence where non-mission critical equipment can be shutdown first to extend run-time for more mission critical equipment. 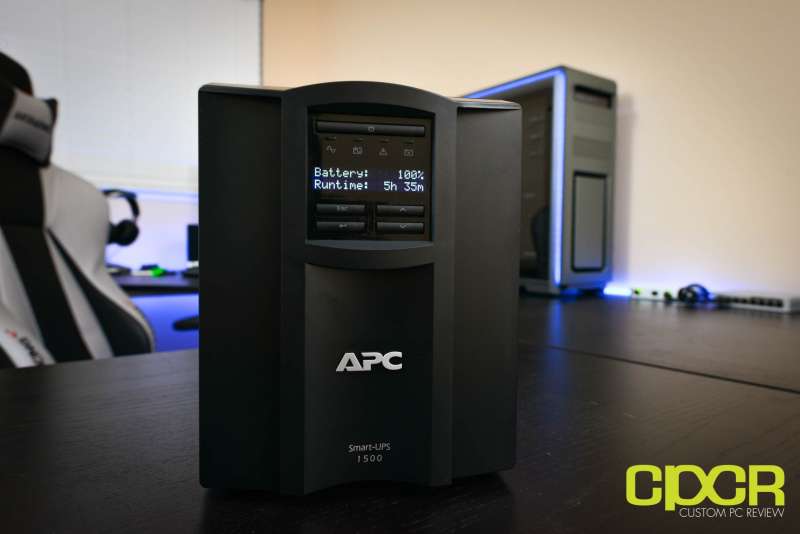 The APC Smart-UPS 1500 includes a LCD display which shows various statistics about the device as well as the ability to access and configure almost all of the configuration options on the APC Smart-UPS 1500 directly through the front display. This is a very convenient feature as it allows users who simply want to use their operating system’s built-in UPS interface rather than install additional software to still configure the UPS. 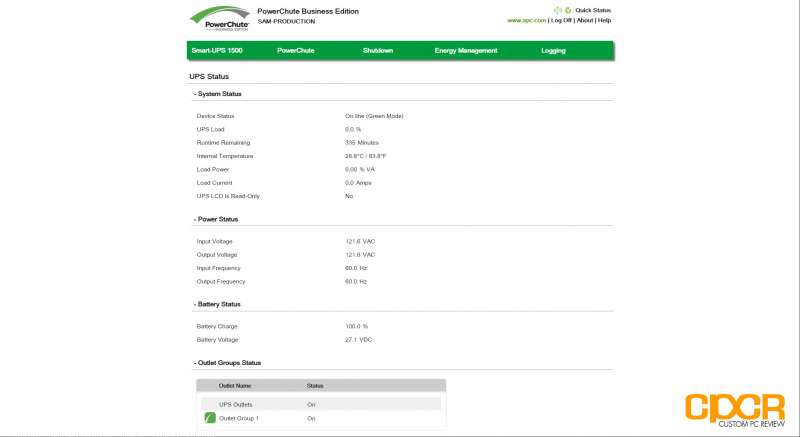 APC’s PowerChute Business Edition software is accessed via the web browser. After logging in, the software displays a status screen which provides a quick look at the status of the UPS. Information in this screen include the device’s status, UPS load, runtime, temperature, input/output voltage, charge percentage, etc. Hopping into the additional information menus, we can monitor battery statistics, diagnostics and outlet groups. 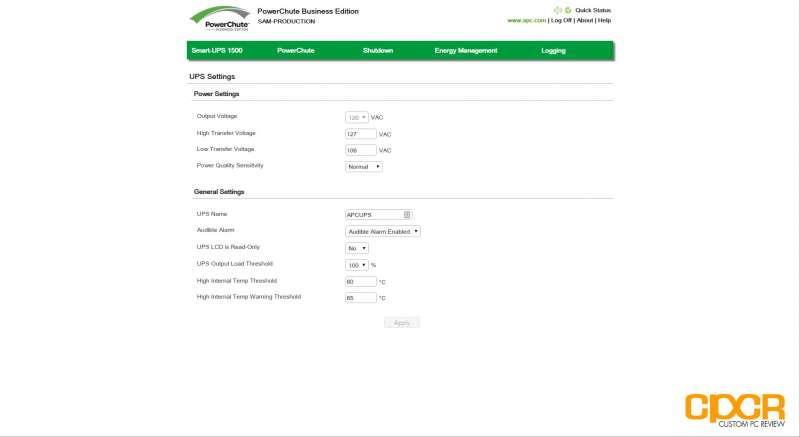 UPS settings allows for adjustment of settings like the high and low voltage transfer range as well as the power quality sensitivity. Here, the internal temperatures can also be adjusted to prevent battery meltdowns due to high heat.

Administrators can choose what events to log and be notified when a any UPS or power issues occur. The UPS can also be hooked into SNMP monitoring systems for those working with servers.

Under logging, all event information is logged here as well as all the status information about the UPS such as battery charge, battery voltage, output voltage, input voltage, UPS load, etc.

In order to test the runtime of the UPS, we devised a test using a series of 50w fluorescent lightbulbs. By chaining the bulbs together, we could load the UPS to a fairly precise amount of power draw. After charging up the UPS to maximum capacity, we plugged in the measured load until the power ran out, then recorded the time it took for power to run out. 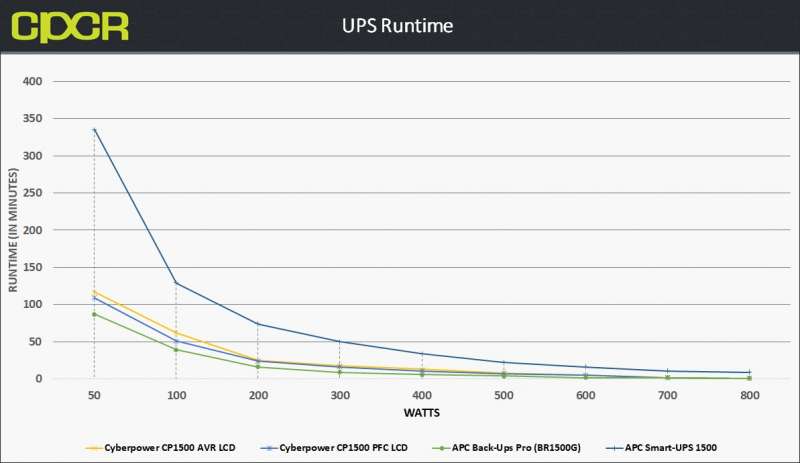 Long runtimes on high power draw equipment is really going to be the biggest benefit of APC’s business class UPSes and the Smart-UPS 1500 delivers in this regard. In our testing, the APC Smart-UPS 1500 was able to provide between 1-2 hours of run-time for a load between 100-200W, which according to EIA data for 2016 should be enough to outlast most unexpected municipal power outages. For higher power draw equipment, run-times do decrease significantly however, even at an 800w power draw, the Smart-UPS 1500 will still be able to sustain connected equipment for approximately 10 minutes – plenty of time to safely shut-down connected equipment or switch to generator backup.

Transfer time refers to how long it takes after AC power is lost for the battery backup to kick in. As such, the lower the transfer time, the better as too much of a delay will result in a system shutting down as soon as the power goes out rendering the UPS useless. Transfer time will greatly depend on the type of UPS and how it’s designed internally.

As the Smart-UPS 1500 is a line-interactive UPS, there’s a delay between the time the power is cut to when the system is restored on battery power. APC rates the Smart-UPS 1500 with an average transfer time of 4ms and a maximum of 8ms. In our testing, the APC Smart-UPS had a wide range of transfer times between as low as 0.8ms to 9.4ms. While the maximum transfer time we measured was slightly higher than APC’s spec, the capacitors on our power supplies had no issues keeping the systems running through the power outage.

Overall, the APC Smart-UPS 1500 is an excellent product for enthusiasts and businesses looking to protect their systems from unexpected issues in the power grid. In our testing, the Smart-UPS 1500 provided not only a clean, pure sine-wave power output, but also provided strong run-times and quiet operation.

In terms of features, the APC Smart-UPS 1500 is packed with useful features such as remote monitoring, event notifications, staggered shutdown, automatic voltage regulation (voltage boost and trim), and more. That said, I’d really like APC to include the auto-shutoff power saving technology which is a feature on some of their consumer models, such as the APC Back-UPS Pro (BR1500G) we’ve reviewed previously. Considering the Smart-UPS UPSes are well suited for workstations, the this can easily provide substantial energy savings by automatically shutting off peripherals when the main system is off.

As far as issues, the only issue I ran into while testing the APC Smart-UPS Pro 1500 was getting the PowerChute Business Edition agent to initially recognize the connected UPS. This was a slightly frustrating process which took several system restarts, software installs/re-installs, UPS restarts, and re-plugging of the USB cable; however, the SMT1500 did eventually get recognized. I’m not sure how it eventually did end up working however, which is a bit worrying. In contrast, this was not an issue with APC’s consumer grade UPSes I’ve tested previously.

The APC Smart-UPS 1500 (SMT1500) isn’t cheap, carrying a pricetag of $450 with an APC SmartSlot Network Management Card costing extra for those who want network management capability. However, with strong run-times and a pure sine-wave output, the pricetag is a drop in the bucket for those who need to protect mission critical systems with critically important data. Recommended!