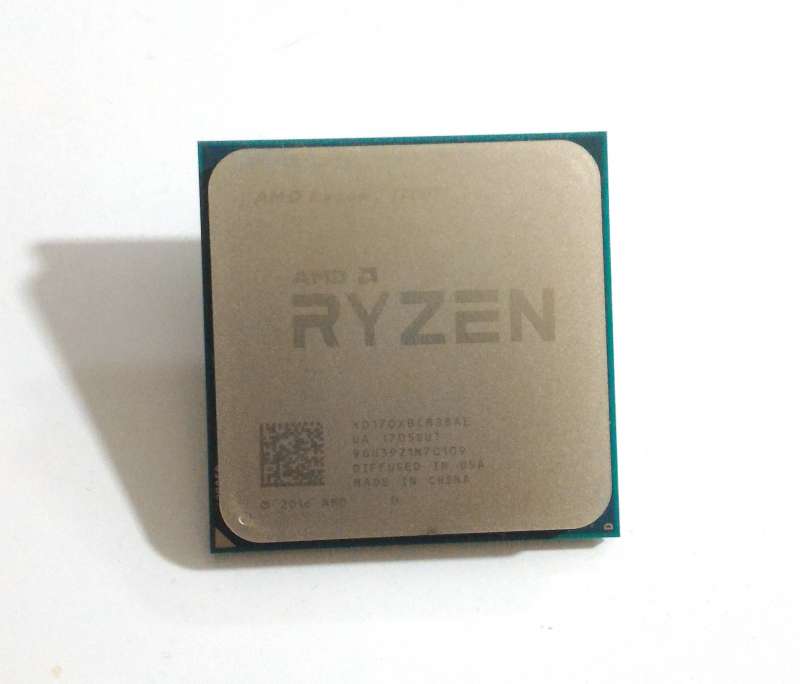 Well, this is it ladies and gentlemen. We’ve been waiting anxiously for over a year now for AMD’s latest Processor, after the disappointment of Bulldozer the PC building scene became primarily an Intel favored one for most serious workloads. While AMD’s APUs have found a pleasant place in the budget market and the FX lineup became a decent option for gamers looking for good bang for the buck, AMD remained way behind Intel in technology for what seams like forever. That changes today. Today we will be looking at Ryzen, will it live up to the hype? Will it fall flat on it’s face?

Compared to AMD’s previous architecture “Bulldozer” which was widely considered a misstep and a bit too forward thinking to even its staunchest defenders, AMD has gone in a very different direction with their Zen based architecture. The bulk of that we will be going over now. 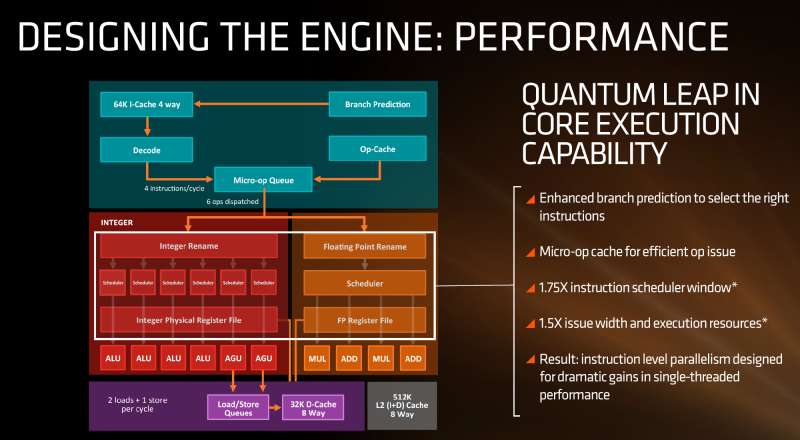 AMD has decided to go with a Micro-Op cache which differs very much from Bulldozer, this would require a fetching cycle to grab details from other caches in frequently used “Micro operations” this allows them to finally catch up with something Intel has been doing since the Core 2 Duo days. This is one of the reasons we see the 50% IPC increase AMD has stated previously.

We also see enhanced branch prediction which AMD has been as vague as it was 9 months ago when AMD originally unveiled the architecture at Hotchips. What we do know is it listed at being able to decode 4 instructions per cycle and with the Micro-Op cache can handle 6 operation per cycle. AMD claimed to get a 75% increase in the scheduler window.

The Floating point side also has two multiply and add ports stacked which supplies 256-bit AVX putting it on par with Intel’s current lineup. With a wider core we should see stronger parallelism helping boost single threaded performance much higher.

We will also see 64KB L1 instruction and data caches, being write back instead of write through, this should work better allowing less idle time which was a huge Achilles of the old Bulldozer FX series. It is no also not shared between two cores as with Bulldozer a huge improvement. We also see a jump to 512KB dedicated L2 per core (twice as much as Intel currently offers) and 8MB of L3 being shared between 4 cores for a total of 16MB on our 8 core. All of this is paired with AMD’s learning prefetcher, which they’ve touted as being “neural net” but more like smart branch prediction rather than Skynet.

We were not able to get a Kaby Lake system in time for the review, but will have one in the coming weeks as well as a GTX 1080 which will be provided by AVA Direct for our Kaby Lake test bed.

Note, all DDR4 tests will be done at 2133MHz for ease of testing, future articles will pit Kaby Lake, Haswell-E and Ryzen at different RAM timings. All DDR3 kits will be run at 1600MHz as well, luckily the site owner was able to run some tests on his FX system since mine would not post and was pressed for time.

We did not get enough time to test overclocked and still had issues such as 3dMark refusing to run. We will be doing more testing throughout the week so check back with us for more. 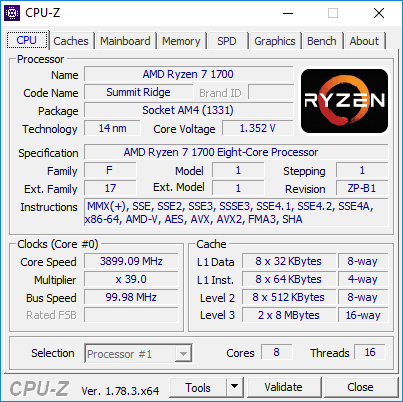 With limited time testing I was able to verify a OC of 3.9GHZ at 1.4V while this isn’t amazing, this is also the lowest end SKU and as such they generally clock worse.

CINEBENCH is a real-world cross-platform test suite that evaluates your computer’s performance capabilities. CINEBENCH is based on MAXON’s award-winning animation software CINEMA 4D, which is used extensively by studios and production houses worldwide for 3D content creation. MAXON software has been used in blockbuster movies such as Iron Man 3, Oblivion, Life of Pi or Prometheus and more. 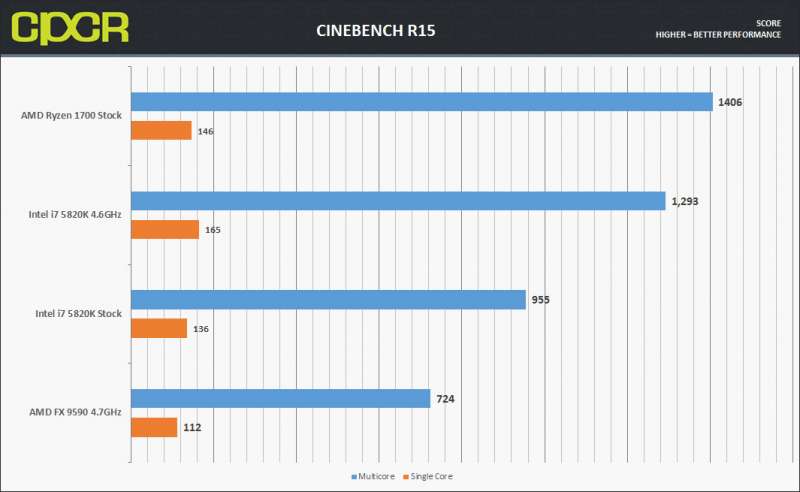 The Cinebench scores we’ve been reading about are truly accurate and it absolutely mops the floor with everything except for the massively overclocked i7, which it should being an 8 core but is also priced around the same as the 5820K. The FX 9590 lags behind even with its tremendous overclock showing us how far AMD has come.

Blender is one of the most popular 3D rendering applications out today and the best open source by far.

We are using the same blender file used by AMD when they originally compared Ryzen to the 6900K we use 150 samples. 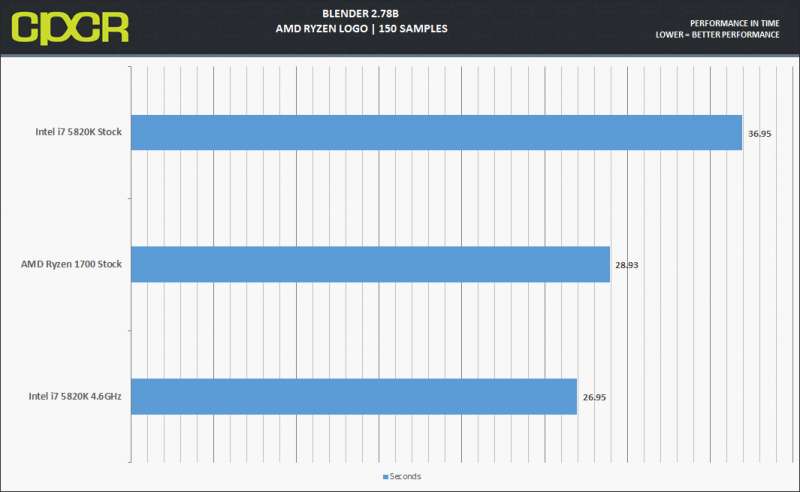 Another test AMD has made famous we ran the AMD Ryzen logo blend and saw it beat the stock configuration pretty handily and narrowly lose to the overclocked configuration. 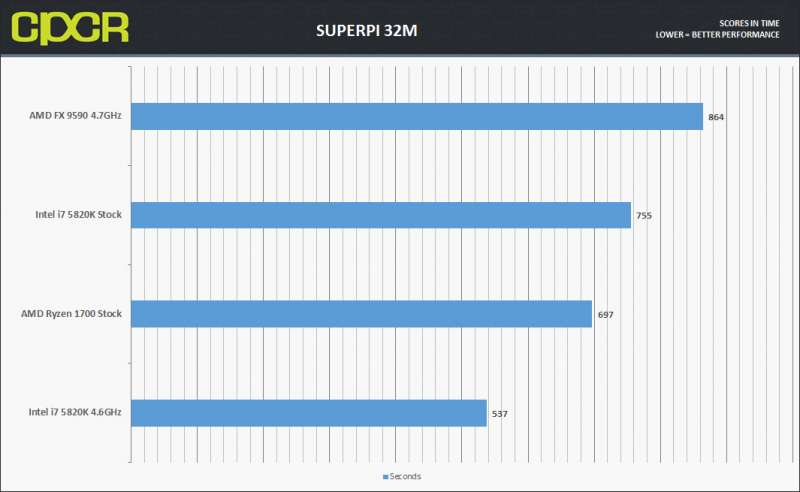 SuperPI is one of the singlethreaded applications in our suite, and with it you can see that the Ryzen 1700 beats the i7 at stock by a little over 10%, which I would attribute to the higher clock speeds and loses out once the i7 is seriously overclocked. 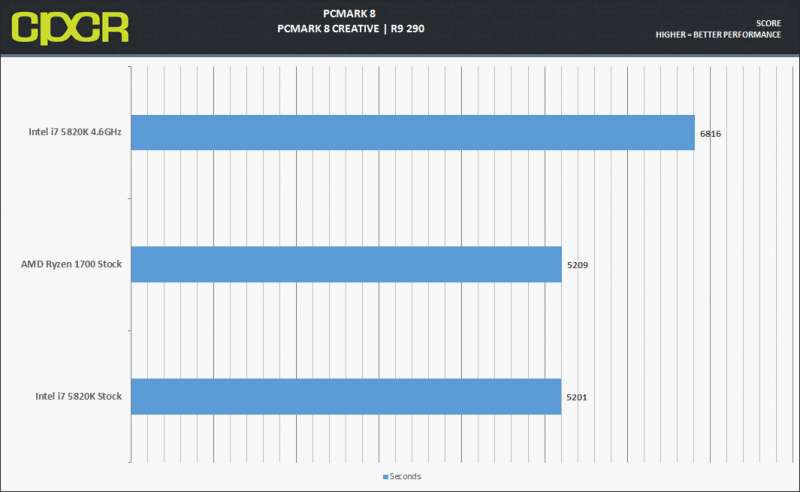 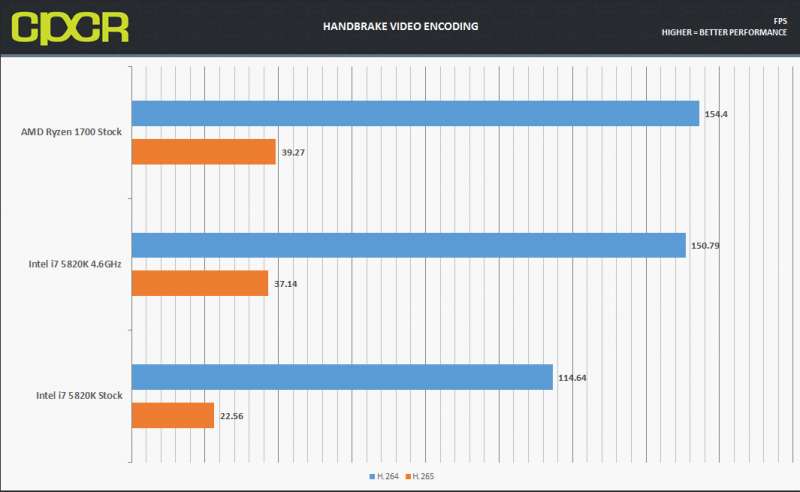 LibrOffice is a open source spreadsheet application, and is Microsoft’s Excels main competitor, It is used by millions worldwide and has fantastic support for hardware acceleration.

In this setting we use a variety of tests based on different used case scenarios such as urban planning, stock trading and sales. 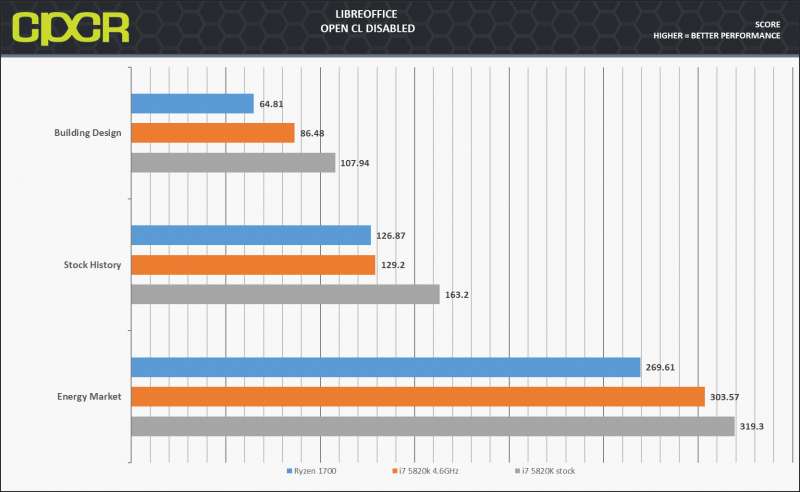 Here we see AMD just flat out win in every occasion. Libreoffice is incredibly scalable and that is proven here.

Dolphin is by far the most popular Gamecube and Wii emulator with one of the most well developed and strong communities on the net. Emulators have been known to be incredibly bottlenecked by single threaded performance. This benchmark runs a Wii program that raytraces a complex 3d scene inside the emulator, this is a very intensive task on one core. Results are given in time. 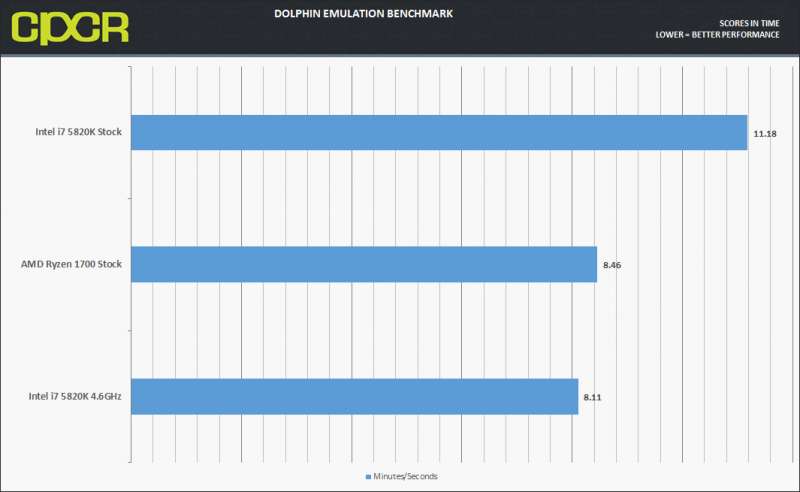 Oddly enough Ryzen kept very close to the heavy overclocked i7, this was one of the most surprising results and requires further testing. I have a suspicion that the higher amount of L2 cache is the reason.

WinRAR is one of the most popular archiving software on the market, for our testing, we simply use the built in benchmark and record Compressing speeds. 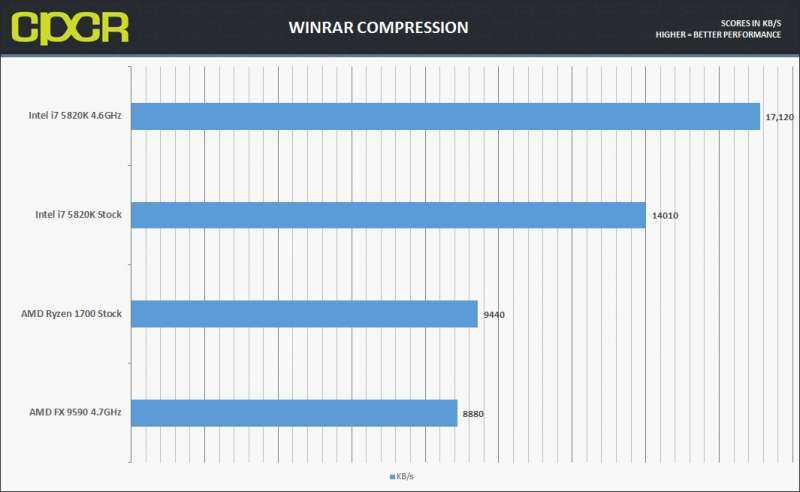 Winrar is probably the worst showing we’ve seen for Ryzen. Intel’s offering beats it by almost 90% overclocked and by over 50% at stock.

Rainbow Six Siege is one of the most popular shooters out today. Using Ubisoft’s AnvilNext2.0 engine. Solid multicore utilization, along with lots of physics-based environmental destruction, particle effects such as smoke and fire and, fast paced action makes this for one spectacular CPU gaming benchmark.

Our benchmark uses the built in tool which does a flyby through the “House” map as explosions go off and lighting and particle effects fill the screen.

Here we see nearly equal performance even at 1080P and medium settings it seems to be rather GPU bound. Though all hardware hit the 130+ FPS I was aiming for, something that most competitive gamers are asking for today. 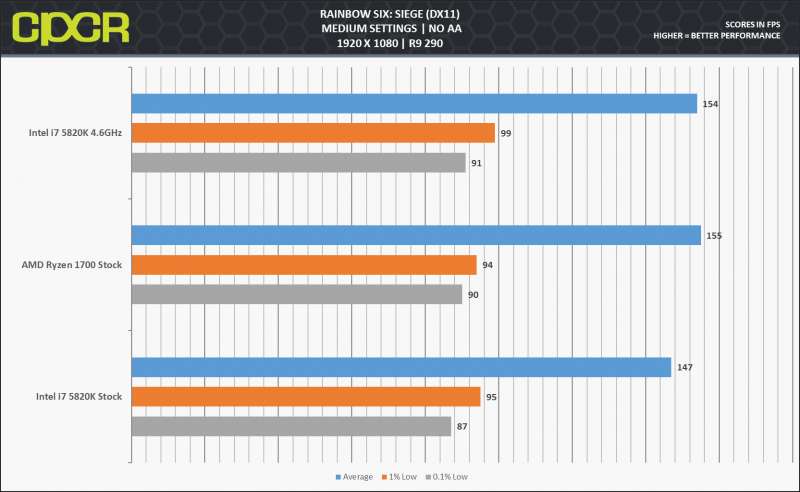 The latest title from Creative Assembly’s Total War series is set in The games workshop Warhammer universe, This like many of the Total War RTS titles before it is a very CPU dependent game and is known even in DX 12 mode to be very single core dependent.

Our testing is done using a large custom Battle replay with 4 armies at max unit size with almost 10 thousand units smashing into eachother, this one taxes the CPU more than any other scenario I’ve been able to come up with. 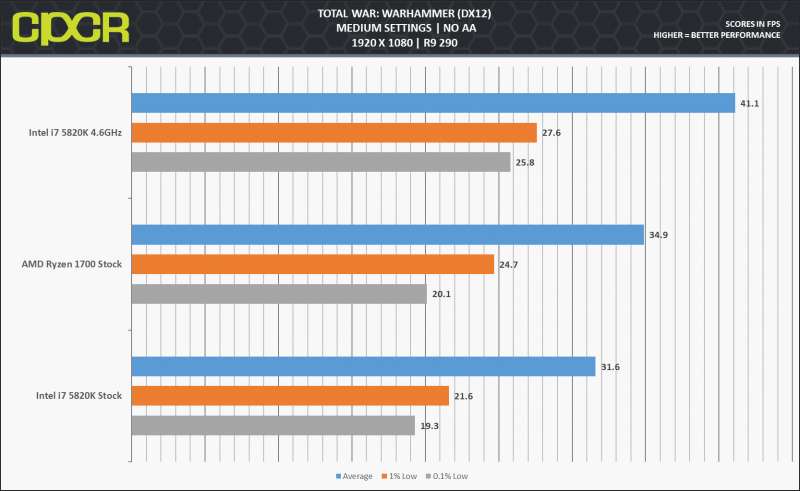 Here like many of the other tests we see that the Ryzen CPU sits somewhere between the stock and overclocked configurations of our i7 5820k, in the battle I played on the Ryzen system performance was solid and this is really a worst case scenario. 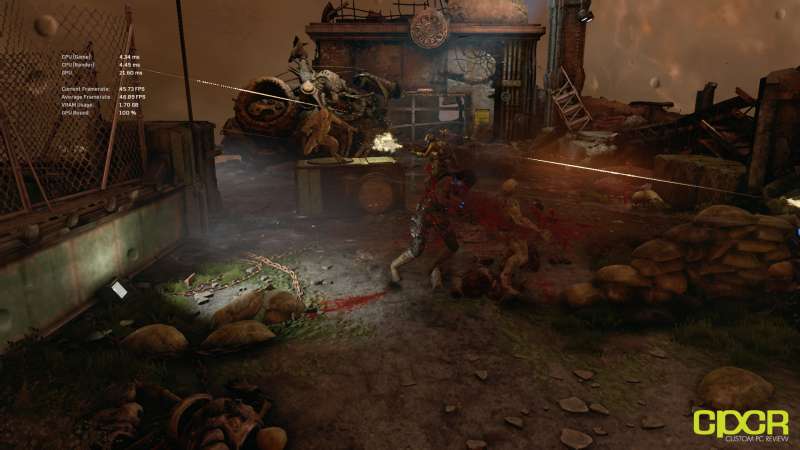 Gears of War 4 is the latest installment in Microsoft’s long-running third-person shooter franchise. As the first of the series to launch simultaneously on both Xbox consoles and PCs, Gears of War 4 is based on Epic’s Unreal Engine 4 and fully supports DX12, making it one of the most well optimized PC titles of 2016 offering a plethora of graphics options which can be adjusted for scaling across large varieties of hardware. 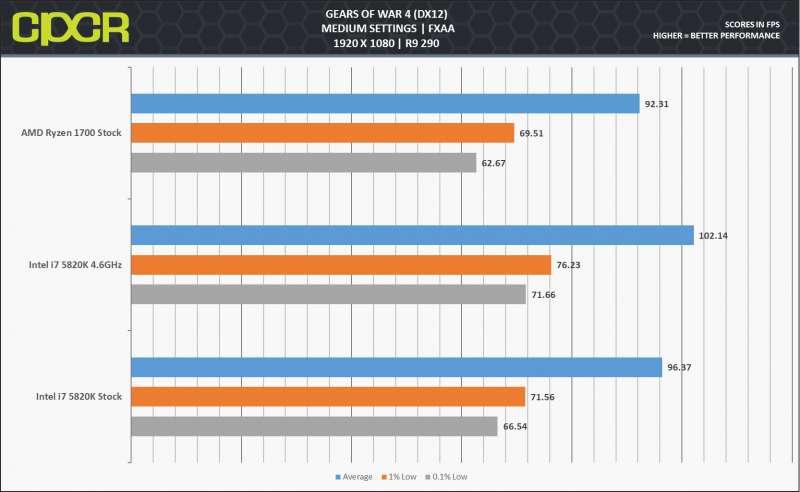 Here in Gears of War 4 we see Ryzen lagging behind, but still pushing quite a lot of frames and a very enjoyable experience at 1080P.

Rise of the Tomb Raider 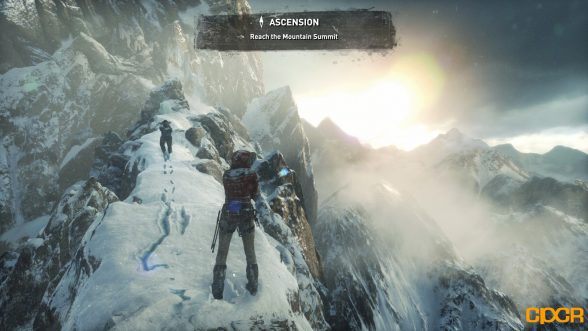 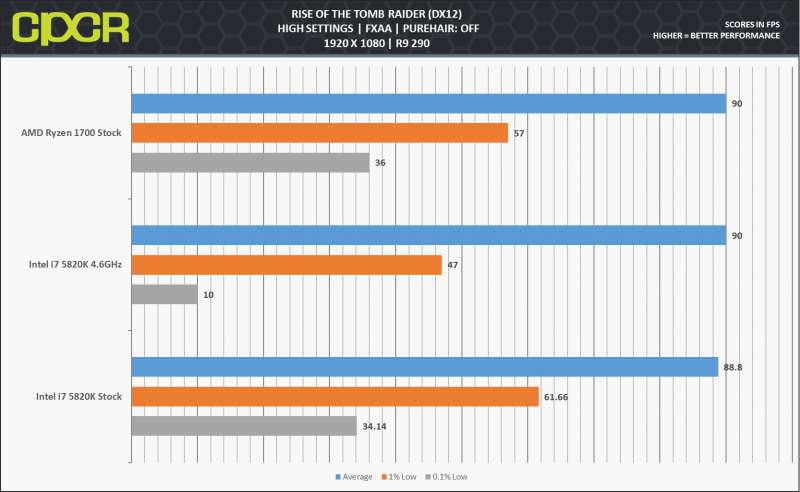 Here we see in DX 12 Ryzen keeping up with the i7, though we assume this is a graphics bound scenario and this will be one of the games we will retest with the GTX 1080.

This product has been on our minds as reviewers, enthusiasts, and consumers for the past 2 years and AMD has put millions of engineering hours into designing this complex piece of tech. It, aside from XFR being rather disappointing boosting by only 50MHz on this model or 100MHz if you use a 1700X or 1800X, AMD has totally come through with their promises and has released a great product that manages to take the fight to their rival where they know they can win rather than trying to compete at all levels like they did previously with Bulldozer. This is a smarter, leaner, and hungrier AMD looking to take marketshare where ever they can with something that absolutely hammers products in its price point and keeps up with a product twice its price.

The Ryzen 1700 which we have reviewed today seems to be pretty much everything AMD has made it out to be. Fantastic single threaded performance, vastly improved IPC and multicore performance that destroys processors in its price point. While I did not get to test with the highest end GPU nor against Kaby lake I did see it hold its own against Intel’s older Haswell-E SKU which at 4.6GHz should perform close to the max overclock most can get on Broadwell-E Six cores which get between 4.2 and 4.4GHz.

While I did get my sample late, experienced constant crashing until I flashed the latest BIOS from ASUS. What time I did get with this CPU has been quite good, I did not notice a real difference in performance in single threaded tasks and a nice uptick in heavier multithreaded loads even at stock.

Many reviews have complained on the lack of gaming performance compared to Intel’s mainstream platform but this product isn’t aimed at gamers. It’s aimed squarely at people like myself who are looking for more than great performance in one thing at a time, who will concede getting slightly more FPS in a dual GTX 1080 system or a Titan XP at 1080P in order to get the most out of video editing, 3D rendering Twitch.TV streaming and other professional workloads. Much like Haswell-E and Broadwell-E These CPUs get underutilized in your average gaming scenario. Although I am still waiting on our Kaby Lake i7 7700K I believe that aside from price, these are two VERY different products aimed at very different target audiences. As much as AMD would love to sell their highest end CPUs to gamers of all shapes and sizes I think, in the end the upcoming R5 Quad and Six core SKUs will perform very similarly to the CPU we reviewed if not better due to the higher clock speed they will most likely have as well as being much cheaper.