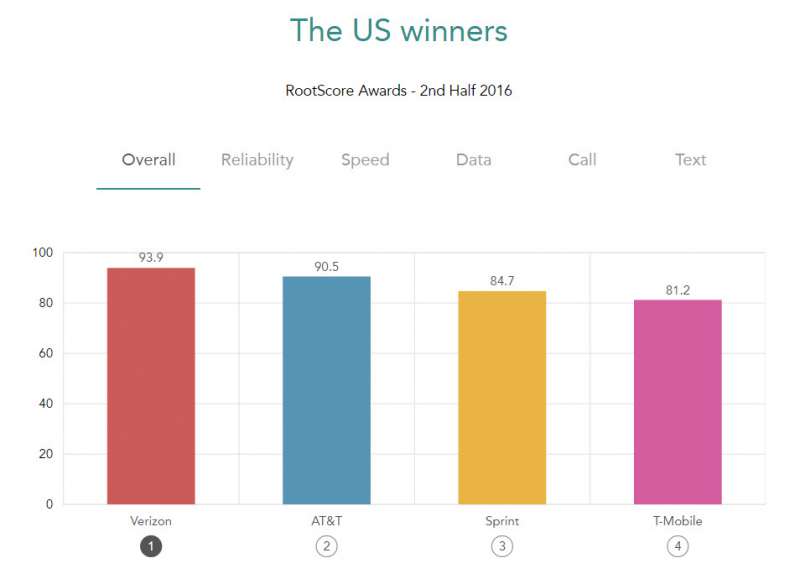 Rootmetrics recently released their mobile networks report for the 2H2016 and in line with their 1H2016 results, Verizon once again swept every single category, scoring #1 in overall with a score of 93.9 points while T-Mobile on the other hand arrived in last place scoring a total of 81.2 points.

In order to arrive at these results, Rootmetrics conducted 3,690,123 tests over 249,935 miles across the United States and 4,283 indoor tests covering 100% of the US population. According to Rootmetrics “These are comprehensive, unbiased results that you can trust to give you a complete and accurate picture of mobile network performance across the entirety of the United States.”

Here’s a breakdown by category. Verizon claimed first place in every category which included reliability, speed, data, call and text. AT&T on the other hand claimed a number two spot in four out of the five tests, only trailing behind Sprint in call performance. Sprint was a solid third or last place in most metrics except for call performance in which it was able to take second place. T-Mobile unfortunately didn’t fare so well, coming in last in three of the five tests, only outscoring Sprint in data performance and speed.

While Verizon celebrated their victory in a recent press release, T-Mobile on the other hand quickly denounced the rankings. T-Mobile’s release, titled “Paid Consultants vs Real Consumers. Who do you believe?” written by T-Mobile CTO Neville Ray, Ray wanted to bring to light that these results are from consultants whom Verizon paid millions. T-Mobile on the other hand advocates using crowd sourced data such as Speedtest.net, Twin Prime, and OpenSignal where test results are gathered from customers of each respective network running network performance tests on their own devices. In a recently published report by OpenSignal, T-Mobile scored top marks, tieing with Verizon for the best wireless network.