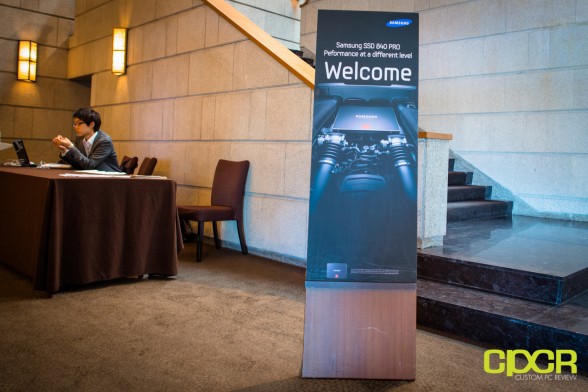 Samsung is pulling the wraps off their latest and greatest SSD, the 840 and 840 Pro, and we’re here in Seoul, Korea to witness its launch!

According to Samsung’s latest press release, the 840 series will come in two flavors, a standard edition along with a “Pro” edition with the standard edition being geared towards general consumers and the “Pro” edition is geared towards “serious users” (power users, enthusiasts, etc.). Most details are still kept under wraps on these drives, but they are expected to support the SATA 3 6Gb/s interface and will contain Samsung’s all new in-house MDX SSD controller. Additionally, the “Pro” edition of the drive is being rated at up to 100,000 IOPS random read and 90,000 IOPS random write which should put it right up top as one of the fastest SSDs on the market come October.

We’ll be learning more about the launch of this iconic new drive in the next couple of hours so definitely check back on the site for updates. Seems like Samsung is very proud of their new 840 series and it’s been a long awaited update to the legendary Samsung 830!

Be sure to hit the next page for the full press release!

The Samsung SSD Global Summit held at the Shilla hotel in Seoul, Korea, was attended by approximately 70 tech media and power bloggers across the globe for a first-hand experience of the new series. The full-day program provided sessions covering an in-depth look at the technology, features and capabilities of the new storage devices.

As part of the pre-launch event, following the summit, editors will be invited to release product reviews offering consumers with proof points and information regarding the usability and performance levels of the new series in daily user environments.

The unrivaled performance of Samsung’s SSDs lies in its MDX controller, which delivers superior performance, high reliability and sustainability that are among the product’s proprietary features. The premium class 840 PRO provides 100,000 input/ output per second (IOPS) for random read and 90,000 IOPS for random write. Benchmark test on the overall system performance unveiled a three-fold advancement when applying the 840 PRO in place of a conventional hard disk drive.

The new 840 series will be available globally from mid October through retail channels.