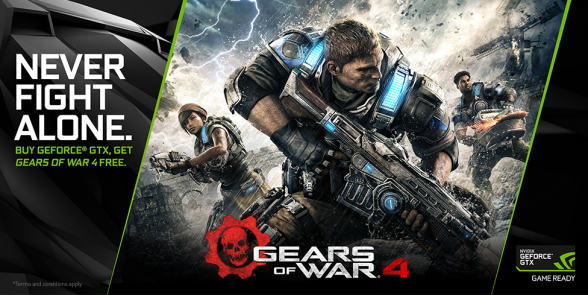 Gears of War 4 will be launching next month for both PC and Xbox One and today NVIDIA has announced a new promotion to bundle the title with its latest NVIDIA GeForce graphics cards and gaming notebooks. The “Never Fight Alone” bundle, which will include a digital copy of the full Gears of War 4 game will be available starting today with qualifying purchases of GeForce GTX 1080 andGTX 1070 graphics cards and select GeForce 10 series powered gaming laptops.

While the news of the bundle is great for fans who are in the market for a new GPU, you’re probably interested in finding out if the title will run on your current rig. Thankfully, we have that information as well. It was also recently revealed that in addition to supporting cross-platform play between PC and Xbox One for all of the game’s co-op modes, the title will also support split-screen co-op on PC and offline LAN support. Gears of War 4 launches on Xbox One and Windows 10 PCs on October 11th and is available for pre-order right now!