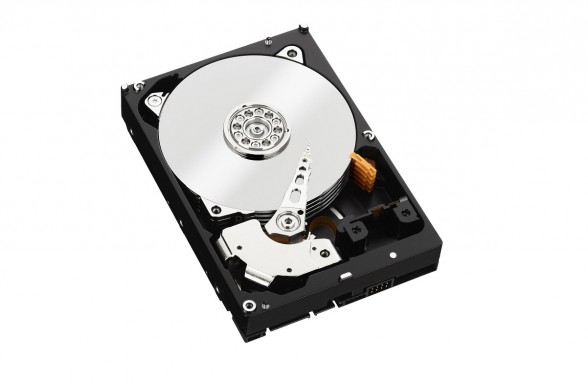 As product reviewers, we try our best to conduct thorough reviews of products. This generally means testing a certain product’s features, performance, build quality, and implementation, but thing we can’t always do right is reliability testing. Once we obtain or review products, we generally have only a couple weeks to thoroughly test it, and for products like hard drives, it’s quite impossible to determine failure rates when you literally have two weeks and a sample size of one.

Fortunately, there are companies out there that do conduct long term internal testing of their hardware and thanks to cloud storage provider Backblaze’s efforts, we’re able to get a much better picture of who’s producing the most reliable hardware and who’s not.

Now, Backblaze is a pretty cool company. They’re a cloud storage provider that does unlimited storage for $5/mo, and to provide this kind of service, they run a whopping 27,000+ hard drives in their datacenter. What’s most interesting about the hard drives that Backblaze runs is that Backblaze is using mostly consumer grade drives rather than drives designed specifically for the enterprise. 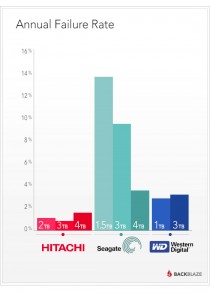 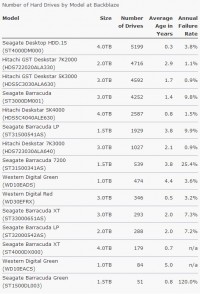 From the results, we can see that Hitachi and Western Digital drives generally fared the best while certain Seagate models fared the worst. The least reliable drive, the Seagate Barracuda 7200 1.5TB model for example had an annual failure rate of 25.4% whereas the most reliable drive, the Hitachi Deskstar 7K3000 had an annual failure rate of only 0.9%.

That said, it’s important to note that not all Seagate drives fared badly as the Seagate Barracuda 7200 1.5TB. The 4TB Seagate Desktop HDD.15 only had a failure rate of 3.8%, which is on par with Western Digital’s 3TB Red and 1TB Green drives which had 3.5% and 3.6% annual failure rates respectively. 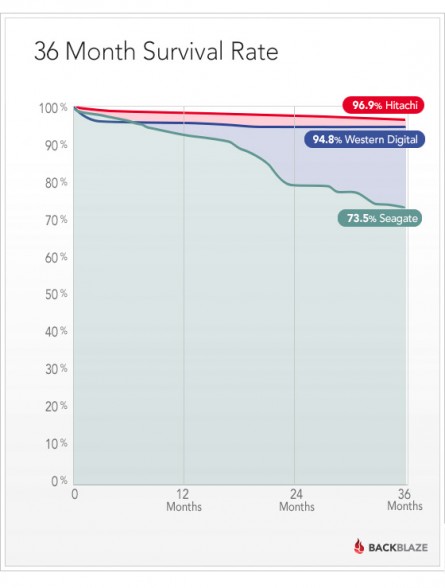 Here’s a look at the failure rate for each hard drive manufacturer on a 36 month chart. Of all drives, Hitachi once again comes out on top with only a mere 3.1% of drives failing within 36 months while Western Digital followed close behind with only 5.2% of drives failing after 36 months. Seagate unfortunately has the worst reliability rating with a failure rate of 26.5% after 36 months, which is probably due to the high failure rates on the Seagate Barracuda 7200 1.5TB.