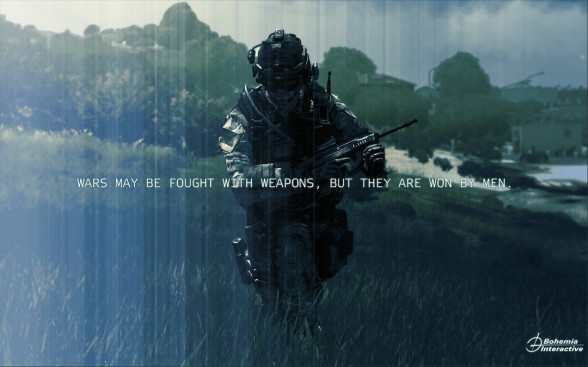 Looking forward to ArmA III, but can’t wait another year for it to be released? Well, it looks like Bohemia Interactive, the guys behind the ArmA series, have heard you loud and clear as they’ve recently posted several video demonstrations showcasing various in-game scenes.

Those unfamiliar with the ArmA series, allow me give you a brief overview. The name ArmA comes from a play on the words Armed Assault, hence ArmA and the series is developed by Bohemia Interactive, the same group of developers who brought us Operation Flashpoint. The original ArmA debut in 2006 and was tremendously popular mainly for its tactical approach, realism, and mind-boggling complexity. This isn’t the game where you just run out in the middle of the map and start spraying and praying. No. You, your teammates and opponents can all be taken down by a single, strategically placed unit and your approach to different scenarios can mean the difference between life or death. Because of this intense realism, the ArmA series has practically set the standard for military simulators.

Today, we’ll be taking a look at the four demos most recently released by the developers. They include the vehicles demo, night ops, support and diving.

In the vehicle demo, there are a couple things to take note of. The first thing is the gorgeous surrounding atmosphere. The sky animation here is a lot more lively and three dimensional compared to the plain and linear skies seen in ArmA 2, which, looking back seems blocky and more like a painted ceiling than a dynamic environment. Of course, the Strider, an armored vehicle and the the main focus of the video, wasn’t too shabby either. The textures on the vehicle were quite solid (albeit a tiny bit plain for me) and the driving physics are a perfect demonstration of how great Nvidia’s PhysX technology can be when implemented properly.

What happens when you’re outnumbered and out gunned? Call in some fire support!

It doesn’t matter if it is artillery or airstrikes, all these have been incorporated into the game and can make significant changes on the battlefield – just as they do in real life. Course, don’t go thinking your support will win the war for you. Anti-aircraft gunners on the opposing team can easily rip your attack helicopters to shreds in a matter of seconds and instantaneously cut off your support. The fine line between winning or losing may depend on choosing the right combination of support, and if you make the wrong move, it might just be gameover. This staggering realism and high level of difficulty is a sure sign of a challenging game that will push gamers to their limits.

Moving onto the night ops showcase, we get to see the improvements made to lighting. In the beginning of the demo, we can see a nice fire emitting flickering lights and shadows while the muzzle flashes of the gun brightens not only the gun, but all the objects including the character around it. Continuing along, we get the opportunity to see all of the tweaks and add-ons in a firefight situation. Night vision can be turned on and off to help locate your friends and foes, while suppressors not only reduce sound but dramatically change the muzzle flash. Additionally, lighting from your flashlight can not only illuminate your surrounding atmosphere, but also give away your position to your enemies. As a company who has a huge background in military simulation, Bohemia Interactive really took account of almost every variable imaginable and incorporated it into the gameplay beautifully.

Finally, we also have the diving scenes in which we’re able to see the eerie yet beautiful ocean floor. Sound effects used in this video are subtle, giving the environment a sense of mystery and if I dare say anxiety in a way. This astonishing undersea world was never avaliable in ArmA 2 and is a lovely addition to the gameplay by adding a unique aspect into the game.  Again, Bohemia paid careful attention to reconstruct the most true to life experience. For example, bubbles will trickle out of our character’s respirator when he exhales and far off in the distance players can see schools of fishing swimming around bringing a sense of life to the setting. The developers are even taking account the type of weapons that may be used underwater, giving the weapon a special type of ammunition complete with its unique properties.

Overall, I can definitely see the developers doing a great job of balancing a great gameplay while still giving gamers the eye candy they’ve come to expect from current generation games. The improvements seen here is a sure sign that ArmA 3 will be a huge leap forward from ArmA 2, instead of a rebrand of the old game.

Thoughts? Comments? Thinking about picking up ArmA III? Not convinced yet? Be sure to discuss below!