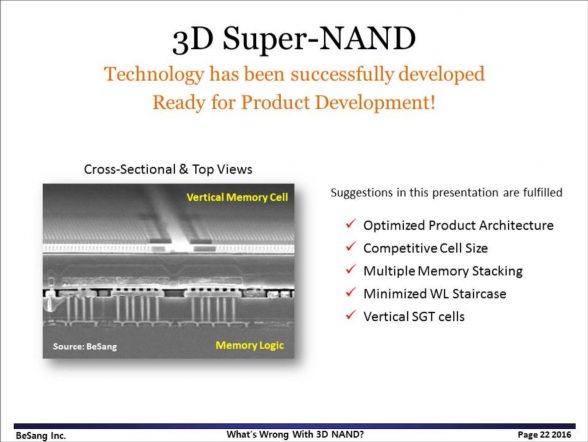 Without a doubt, 3D NAND is the future. 2D planar NAND is already at its limitations and everyone in the memory industry is already making the switch to 3D for their next generation products. While the move to 3D NAND already has us seeing huge leaps in terms of performance, capacity, and endurance, one thing that hasn’t exactly gone down is cost. Theoretically by going to 3D NAND and being able to stack cells vertically, we should be seeing huge reductions in cost yet this currently not the case.

One company trying to remedy this is BeSang, who claims to have a superior 3D NAND technology which can reduce the cost of 3D NAND from the current cost of over $0.20/GB down to just $0.02/GB, a decrease of about 90%. Given that NAND is the most expensive component in SSDs, this technology could revolutionize the NAND industry. 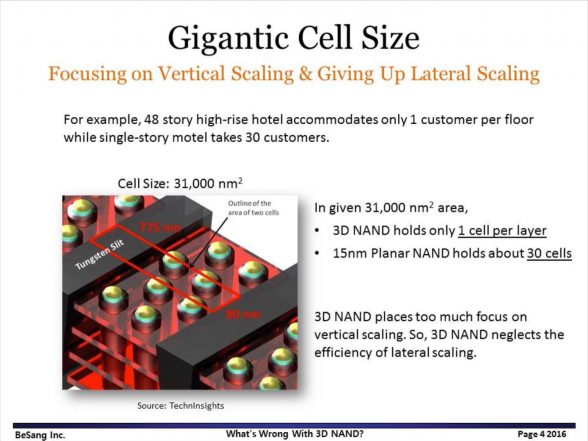 According to BeSang CEO, Sang-Yun Lee, the problem with 3D NAND today boils down to the fact that the cells in 3D NAND being produced today are gigantic, inefficient, and expensive to manufacture. 3D NAND bit cells currently manufactured require as much as 31,000 nm²/bit with just 40% used for storing bits. The other 60% of the cell is composed of control logic, a tungsten isolation slit, and a word-line staircase. 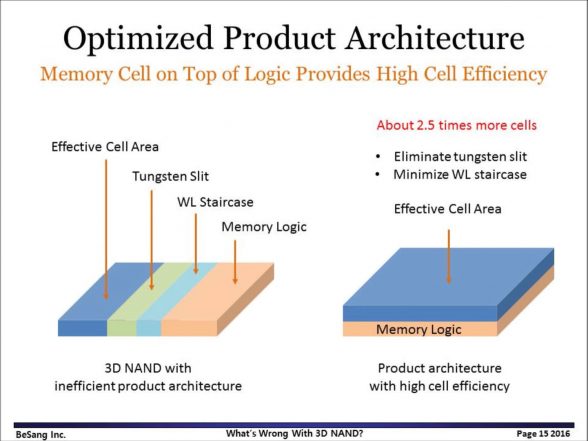 In contrast, BeSang’s 3D NAND technology builds the chip monolithically with all the control logic at the bottom, leaving all the upper layers available for NAND cells. In the process, BeSang is also able to remove the tungsten isolation slit and minimize the wordline staircase. The result is that BeSang’s 3D NAND is able to fit up to 30 bits in the same 31,000 nm² area, greatly reducing cost. 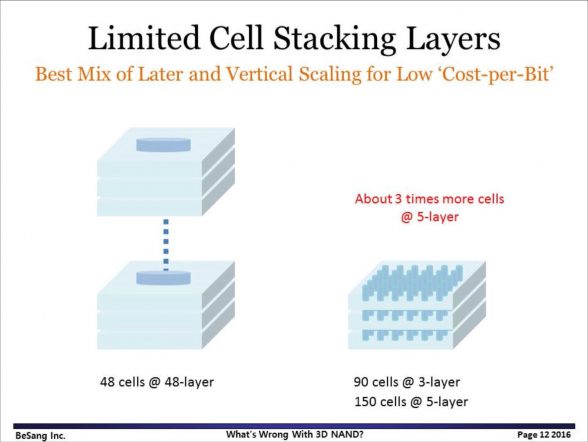 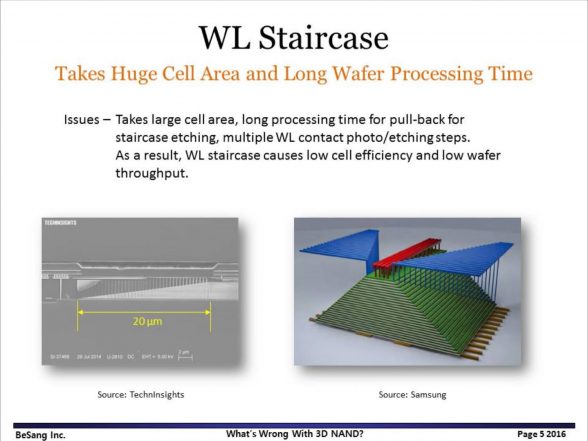 Furthermore, current 3D NAND such as that from Samsung takes approximately 10 weeks to produce and the equipment to do so is very costly due to the complex wordline staircase which requires multiple etching and contact forming steps. BeSang’s 3D NAND on the other hand is far easier and quicker to produce. BeSang believes that because their 3D NAND takes just five masks, they can produce NAND with 3x the capacity of SanDisk or Samsung designs in just 5 days time and with equipment that’s 10x cheaper.

While this sounds almost a bit too good to be true, BeSang claims that their technology is already ready to go. BeSang has already licensed their technology with memory giant SK Hynix since 2013, but they are currently frustrated with the lack of progress in the past couple years. BeSang is currently open to licensing agreements with other memory manufacturers. They’ve also recently introduced a turn-key 3D Super-NAND product for those who don’t have their own NAND manufacturing capabilities but are looking to resell NAND on the market.