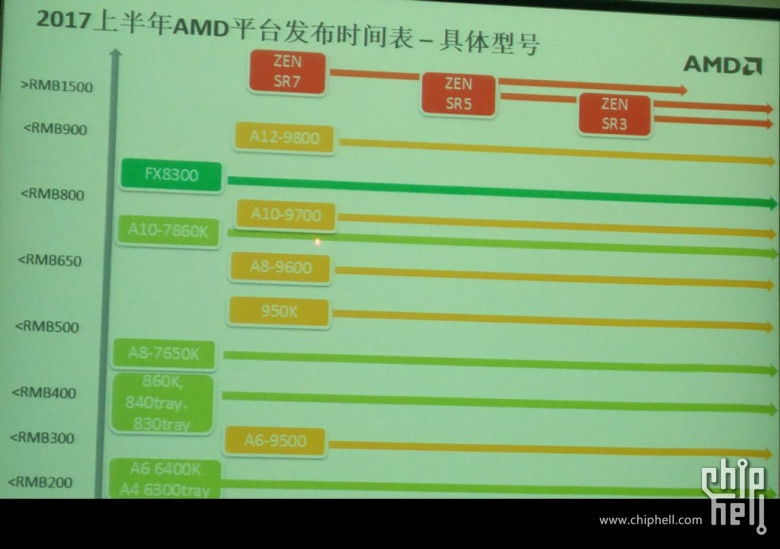 New information about AMD’s upcoming Summit Ridge Zen CPUs has emerged earlier this week based on leaked presentation slides and a letter from MAXSUN, an AMD board partner in mainland China.

Acccording to the leaked slides, AMD plans to have a similar naming convention to Intel as the slides suggest that AMD’s upcoming processors will utilize the SR3, SR5 and SR7 brand names, which is similar to Intel’s Core i3,i5, and i7 series naming scheme. with . The pricing on these parts is said to be 1500-2000 Yuan according to the source which rounds up to $250-$300. The source mentions that the SR7 8-core, 16-thread Zen processor will be on par performance wise with the i7-6850K which is an Intel 6-core, 12-thread processor which is typically sold at just under $600.

Rumors are abound that Zen based Summit Ridge processors will be released on January 17th which would be in line with AMD’s expected Q1 Zen launch. Additionally, there is also some indication of more SKUs being released in March which could be the SR5 and SR3 CPUs.

AMD is also rumored to have overclocking variants of their processors as well. The top end chip is rumored to be priced at around $500 USD. All of these variants are expected to be rated at 95W TDP.