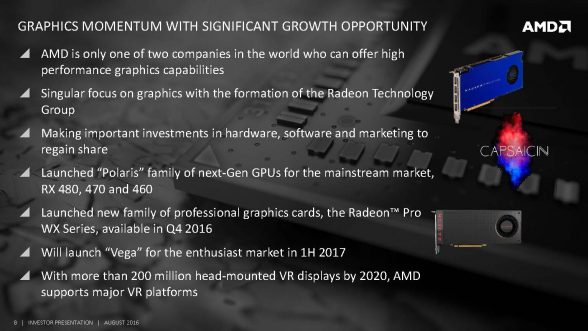 Ever since AMD’s launch of their Polaris GPUs back in June, there have been rumors that the launch of AMD’s high end GPU, codename Vega, would be pushed up for a 4Q2016 launch to better compete with Nvidia’s offerings. This was further fueled by a recent picture which was leaked by AMD’s own marketing director who described the location as Vega’s launch venue.

However, recent slides from AMD’s latest investor presentation suggests that a Vega launch before the end of the year may not be possible. According to the slide, AMD “Will launch ‘Vega’ for the enthusiast market in 1H 2017”. While this is unfortunate news for those of us waiting on a high end graphics solution from AMD, keep in mind that 1H2017 was AMD’s original plan even when Polaris was first revealed well before its launch in June. 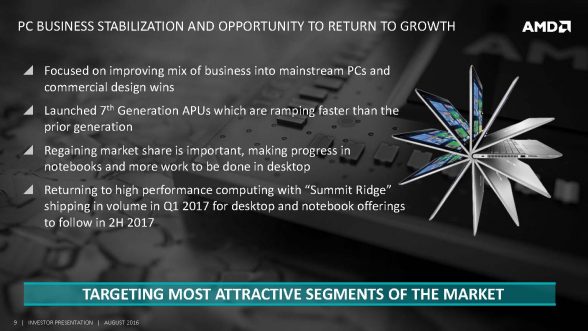 Another piece of well known information that was confirmed in AMD’s investor presentation is that their upcoming Zen architecture based “Summit Ridge” CPUs will begin volume shipping in 1Q2017. Again, we did hear some rumors about a possible limited late 2016 launch of the CPUs, but according to the slides presented here, early 2017 seems to be the solid date.

For those interested in Zen based notebook offerings, it appears that the launch date will be sometime in 2H2017, well after the launch of AMD’s desktop Summit Ridge CPUs.