According to Nordic Hardware, the AMD R9 295 X2 will sport two fully-fledged Hawaii GPUs for a combined total of 5120 Stream Processors. They will also run at a clock speed of 1GHz – the  same clock speed of the current single GPU flagship the AMD Radeon R9 290x. This should ensure that its performance more closely matches that of two AMD Radeon R9 290X in CrossFire although this will largely depend on how well the card is cooled. 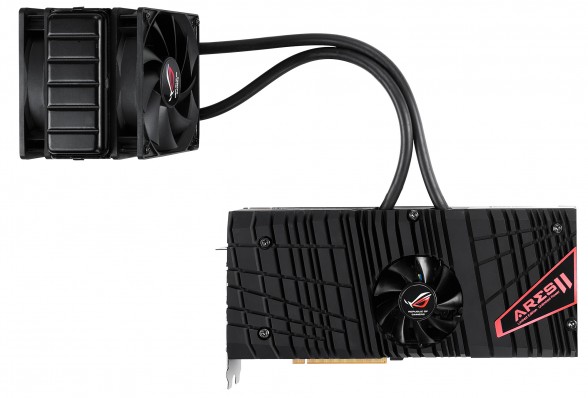 As cooling was a big issue in the previous generation Radeon HD 7990, Nordic Hardware believes that AMD will abandon the triple fan air cooler used on the previous generation AMD Radeon HD 7990 and instead opt for a liquid cooled solution inspired by the ASUS Ares II. Hopefully, AMD’s efforts will translate to better acoustics, better performance, and a thinner card since the heatsink array will no longer be attached to the card itself.

We have yet to hear any pricing information regarding the card, but rumor has it that it’s supposedly going to be cheaper than the $3,000 Nvidia GeForce GTX Titan Z when it becomes available.