Here at Computex 2013, the awesome folks at LSI SandForce are showing off a working demo of DevSleep using a SandForce powered mSATA SSD. For those not familiar with DevSleep, the new spec allows SSDs to go into an ultra low power state utilizing 400x less power than in standard active mode while still maintaining a fast 20ms response time. Currently, the only way to drop an SSD into such a low power state is to put a device into standby. As you can imagine, this will be highly beneficial for those running mobile devices such as laptops and tablets. 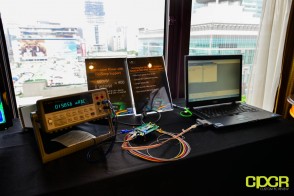 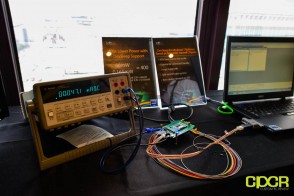 In order to demonstrate DevSleep, LSI is using a SATA to mSATA adapter and is tapping into the 3.3v power line powering the SSD. As we can see from the shot on the left, the SSD in normal active mode is drawing 19.856mA, which translates to about 65.5mW. By toggling a switch sending the SSD into DevSleep mode, we can see on the right that the SSD’s power draw is drastically reduced to 0.047mA, which translates to about 0.155mW, a power savings of  ~99.8%! This will be huge down the line especially with the mobile market growing at such a rapid pace.

Current generation SandForce SSD controllers are already capable of running in DevSleep mode although it’s up to individual SSD vendors to incorporate the feature on their SSDs. For more information on DevSleep, be sure to check out the SATA-IO whitepaper here.