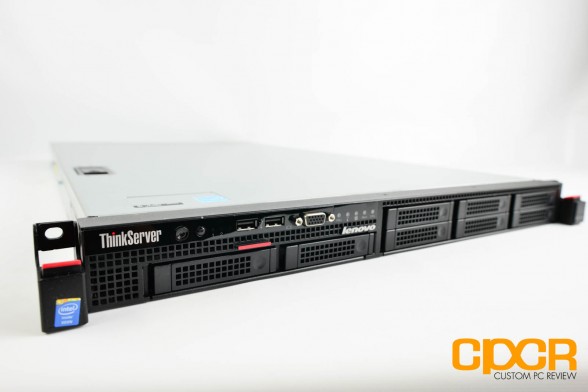 In terms of specs, the Lenovo ThinkServer RD540 is a powerhouse. With the capability of accommodating two Intel Xeon E5-2600v2 series processors, the ThinkServer RD540 can scale up to 24 cores and 48 threads. A total of 20 DIMM slots means a total of 320GB of DDR3 ECC memory can be installed and a choice between 4x 3.5″ bays or 8x 2.5″ bays means up to 16GB of storage is possible.

A Closer Look at the Lenovo ThinkServer RD540 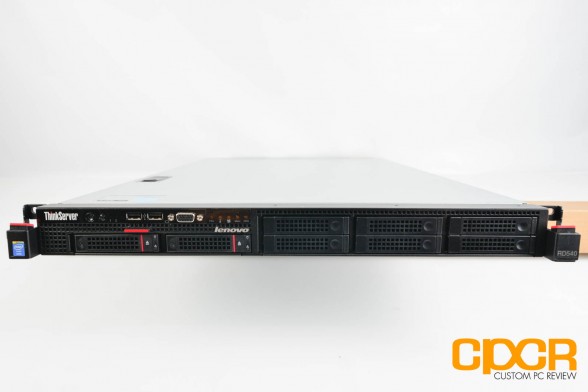 Looking at the front of our server, Lenovo includes 8x 2.5″ SFF drive bays, power/reset buttons, two USB 2.0 ports, a VGA out, and a multitude of indicator LEDs to quickly let you know if there’s an issue. 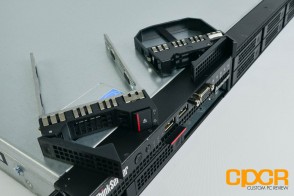 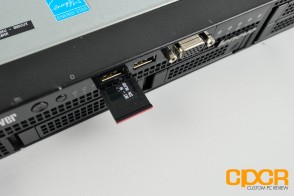 Lenovo also includes a small slide out ID tag that displays serial number information as well. One important thing to note about these servers (and I believe most Lenovo servers in general) is that Lenovo does not include any drive caddies, so you’ll need to purchase one for each drive you intend to install. Unfortunately, Lenovo drive caddies are a highway robbery at nearly $30 a pop (~$200+ to fully equip a server), but luckily there are numerous aftermarket drive caddies that work on the ThinkServer RD540 and can be found on Amazon for less than half the price. 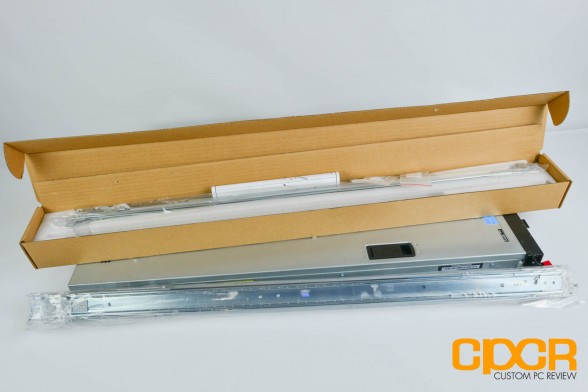 Although Lenovo prefers to nickel and dime you on the drive caddies, Lenovo does include a tool-less rail system with the ThinkServer RD540. This is nice to see as most server vendors require rails to be purchased separately and depending on the vendor, rails could cost as much as ~$75-$200 a set. 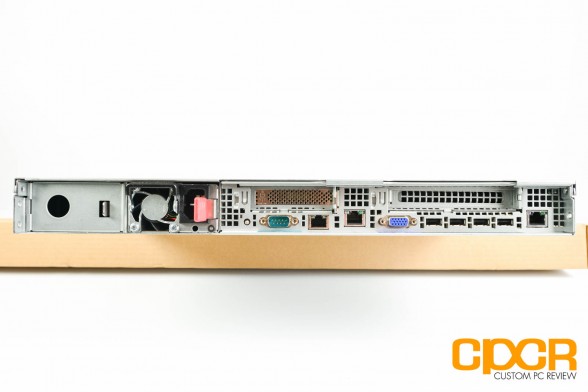 Swinging around the back, we can take a look at the rear I/O. At the left, there are two slots for power supplies – one primary and one redundant. There’s also 3x Intel Gigabit network ports (one of the ports being a combo management port), a serial port, a VGA port, and four USB 2.0 ports. 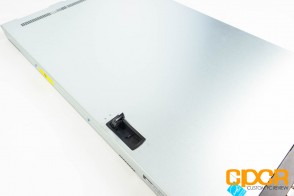 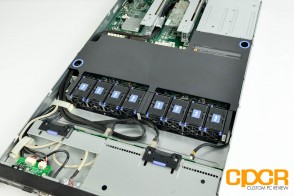 Another thing you’ll notice about the ThinkServer RD540 is the shroud covering the CPU and memory. The way the server is designed is that the array of fans pull air in through the front of the system and use the shroud to direct air out the back creating enough air flow to cool the CPU and memory despite not having a fan directly attached to the CPU’s heatsink. 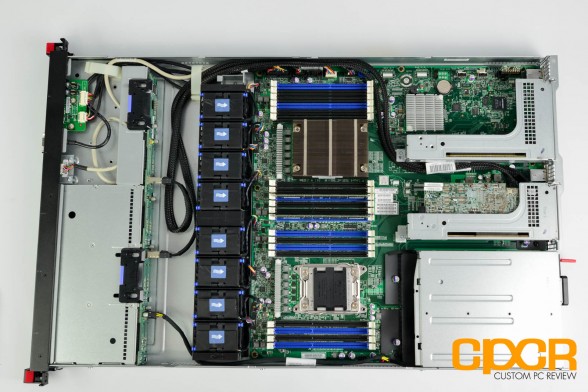 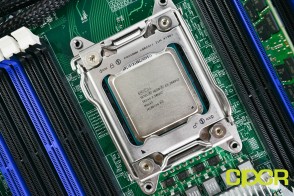 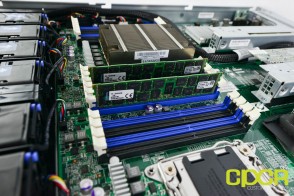 Here’s a look at the ThinkServer RD540 with the cooling shroud removed. The first thing you’ll notice is that the server’s internals are incredibly clean thanks to the server’s use of a proprietary power system.

Onboard we also get a custom designed Intel C602-J chipset powered motherboard which features two FCLGA 2011 sockets supporting two Intel Xeon E5-2600 v2 CPUs, and 20 DDR3 RDIMM slots (12x for CPU1, 8x for CPU2). It’s almost pitiful to see how few components we’ve put into this thing, but it does guarantee us plenty of room for expansion down the line should we need it. 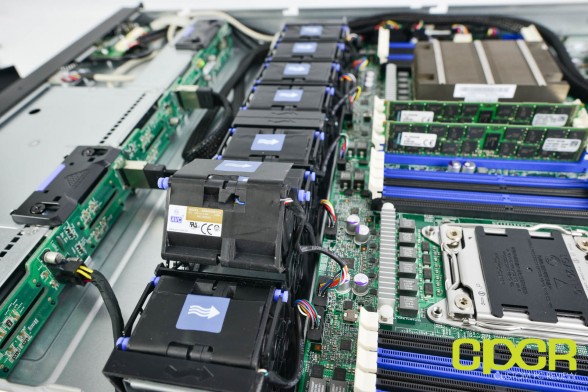 All fans are tool-less in design so they can simply be popped out and replaced in the event of a failure. Our server included a 7+1 redundant fan setup. 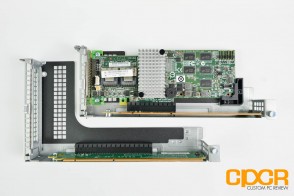 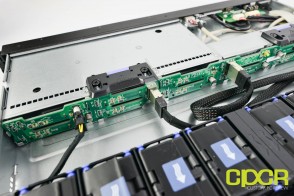 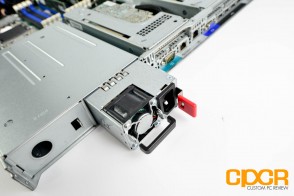 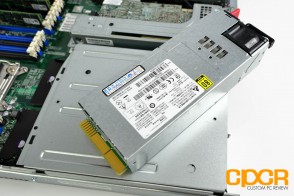 The ThinkServer RD540 can be configured with either one or two PSUs for redundancy. The PSUs onboard are 80 Plus Gold Certified 800w 1U PSUs manufactured by Delta. Delta is one of the top manufacturers of PSUs in the world and focuses primarily in the server PSU market so we’re quite confident about these units.

For those with larger server deployments Lenovo also offers ThinkServer Smart Grid power management technology which allows system administrators to manage server power up to a rack level. This could be useful to ensure circuits aren’t overloaded with a full 42U rack of servers running at peak load.

The only major downside with these PSUs is that they’re very expensive to purchase separately with prices around ~$350 a pop making it almost cheaper to purchase a server just to harvest the PSU than to purchase a new PSU itself. 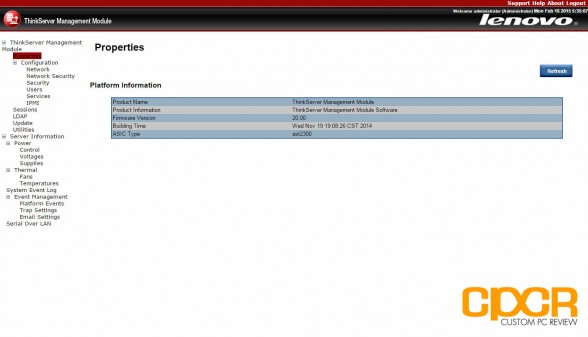 One of the ThinkServer RD540’s Gigabit Ethernet ports can also double up as a management port, which allows access to a wealth of server information along the with ability to upgrade firmware, turn on/off/restart the system, monitor system information, setup e-mail alerts, logging, etc. Since the servers I picked up started with extremely old firmware, it was very nice to be able to easily upgrade the firmware right from the management interface.

In addition to the standard management interface, Lenovo also offers an optional ThinkServer Management Module Premium add-on, which gives you access to a virtual KVM directly through the management website. Unfortunately our server wasn’t equipped with the ThinkServer Management Module Premium add-on so we weren’t able to test the virtual KVM functions however, I can see this being extremely useful especially for those running bare metal OS installations.

For the past few weeks, I’ve spent quite a bit of time tinkering with the Lenovo ThinkServer RD540 and so far it’s been everything I had hoped it would be. Having only prior experience with Dell and HP servers, going with a Lenovo server was leap of faith for me, but I’m glad I made it. Everything about the ThinkServer RD540 was super intuitive as it should be from hardware design to installation. Setup and server maintenance was also an absolute breeze thanks to Lenovo’s built in management system.

As I write this, CPCR’s server infrastructure has already been migrated to the ThinkServer RD540 and it’s been a few days since the server was racked. There haven’t been any failures to report yet and hopefully no failures will happen in the next few years as well. Of course, any failures in our infrastructure will without a doubt be made public.

Over the next few weeks, we’ll be continuously monitoring and optimizing server applications to better take advantage of the additional server resources. Hopefully, we’ll start seeing reduced response times as a result. Currently I’m also thinking of bringing my cold backup server online for even better availability, but with the redundancies that are in place, it should be fine for now. Server power consumption is currently peaking at just 85w with average power consumption around 77w, so there’s definitely room in our colocation to add some additional infrastructure.

Currently Lenovo no longer makes the ThinkServer RD540, so retailers such as Amazon or Ebay are your best bet to secure one of these outgoing servers at clearance pricing. Late last year, Lenovo announced the ThinkServer RD550, which will replace the ThinkServer RD540. Along with the Haswell-E architecture, it packs quite a bit more features making it an even more competitive offering for virtualization and mission critical applications.