Battle of the Best 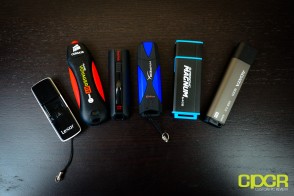 With the introduction of the Panther Point chipset along with Ivy Bridge CPUs, USB 3.0 has become more mainstream than ever before, which means those purchasing a new system nowadays can take full advantage of the additional bandwidth offered by USB 3.0. For those unfamiliar with the benefits of the USB 3.0 specification, USB 3.0 is theoretically capable of hitting up to 5.0 Gb/s, which is over 10x faster than the USB 2.0 specification of 480 Mb/s. To put this in perspective, the SATA 3 specification has a maximum theoretical bandwidth of 6 Gb/s, so in theory a USB 3.0 flash drive is capable of achieving “SSD-like” transfer rates.

With back to school season in full swing and many of you taking advantage of the many back to school computer deals these days, today we’ll be doing a roundup review of the top six fastest USB 3.0 flash drives on the market from six very well-known manufacturers – SanDisk, Kingston, Corsair, ADATA, Lexar, and Patriot.

Want to know which of these flash drives to pick up along with that brand new laptop you’ve just ordered? Let’s find out!

Taking a look at the specifications here, it’s quite clear that theoretically the fastest drive in this roundup should be the Kingston HyperX with advertised speeds of up to 225MB/s sequential reads and 135MB/s sequential writes. Additionally also notice that not all of these drives offer capacities of under 64GB, so today’s roundup will be focused on the 64GB edition of all the drives listed above. 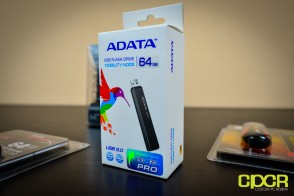 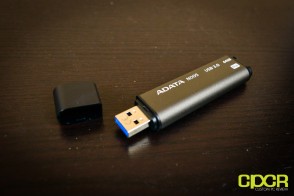 Here’s a look at the ADATA Nobility N005 Pro USB 3.0 flash drive. The design on the drive is a fairly basic stick style design with a cap on front. This is ADATA’s top end USB 3.0 flash drive and features sequential read/write speeds of up to 180MB/s and 90MB/s respectively. 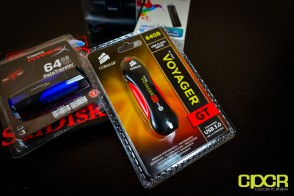 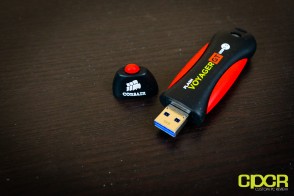 Here’s a look at the Corsair Voyager GT. This particular model we have today is the CMFVYGT3A-64GB, which is the newest revision of the Voyager GT released only a couple weeks ago. While the Voyager GT is still in the standard candybar shape, it does have a special rubber coating on it which help protect the drive against shock. This along with the Kingston HyperX are the only two drives that feature some sort of additional shock protection in the design. 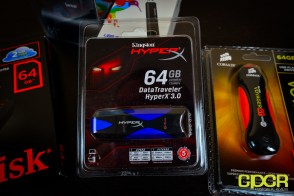 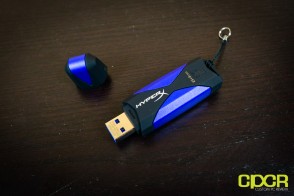 Here’s a closer look at the Kingston HyperX’s packaging along with the drive itself. Included in the packaging, we get both the drive as well as a very short lanyard for connecting the drive to a keychain or a backpack. Additionally, the drive is ruggedized with hard plastic and rubber, which should give it greater resistance to shock. 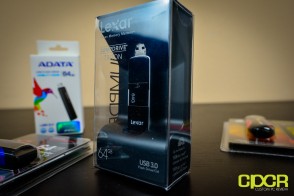 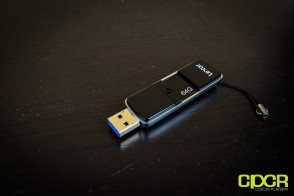 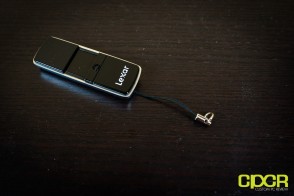 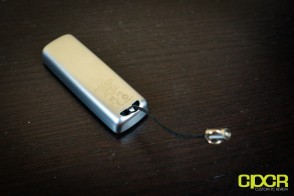 Here’s a look at the Lexar JumpDrive Triton 64GB USB 3.0 flash drive. Of all the drives tested today, the Lexar JumpDrive Triton undoubtedly has the best looking packaging with the drive sitting in a transparent plastic casing giving it the impression of a classy piece of equipment. In terms of the drive itself, we can see that the back is finished in a brushed metal finish and the front of the drive is made of black plastic. The USB connector itself can slide in and out of the casing via a slider in the center of the drive to protect the head from any damage from bending and eliminates the necessity of a USB connector cover. Lexar has also included a lanyard with the JumpDrive Triton as well, which, oddly, is identical to the one provided by Kingston with their HyperX. 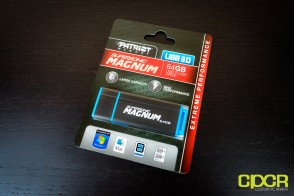 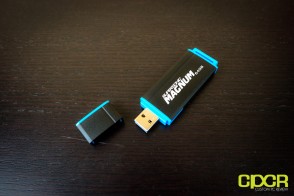 Here we have the Patriot Supersonic Magnum 64GB USB 3.0 flash drive. The packaging on the drive is fairly basic with just the drive itself included. Like its packaging, the drive is a fairly basic candybar style design with a blue and black color scheme. One thing to note about the Patriot Supersonic Magnum is that it is especially wide when compared to other drives reviewed today, so if you have a USB hub with very close USB ports, this drive might not work when another device is plugged in. 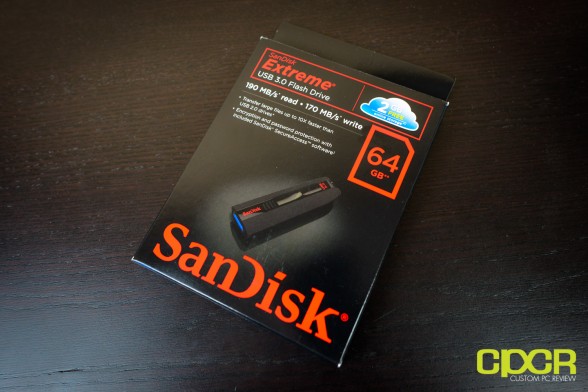 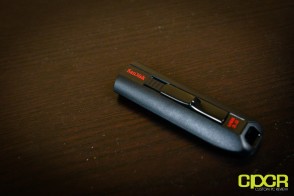 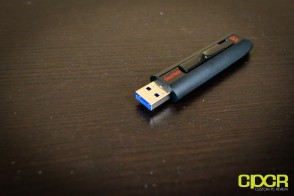 Finally, we’ve got the SanDisk Extreme 64GB USB 3.0 flash drive. Similarly to the Lexar JumpDrive Triton, the SanDisk Extreme has a USB connector that can be hidden. The drive itself is finished in black with all text/logos in red and it’s actually physically one of the smaller drives in the roundup today.

For testing, we went with a couple runs of  Crystal Disk Mark, which gives us a good idea of what kind of performance can be expected in both sequential transfers as well as 4k (small file) transfers. All testing is done using the native Intel USB 3.0 controller included with the Ivy Bridge processor and the (Z77) Panther Point chipset. 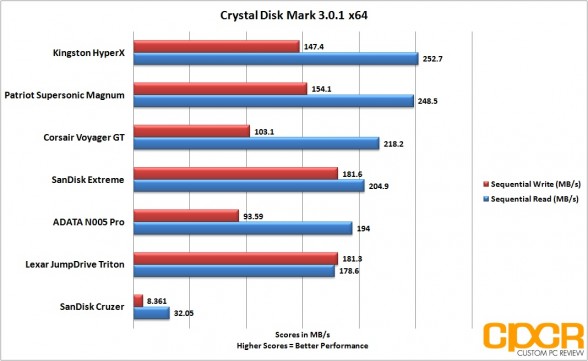 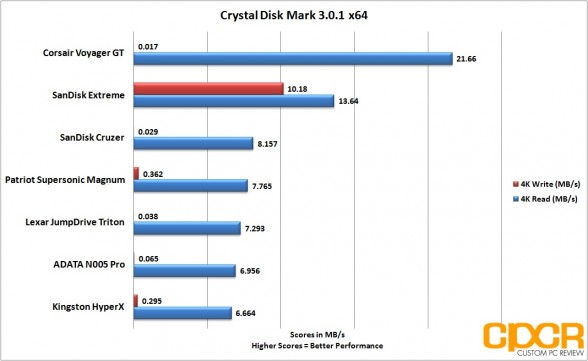 Switching over to the 4K numbers, we can see that for the most part, every drive struggled with 4K writes with the exception of the SanDisk Extreme, which scored a whopping 10.18 MB/s, which just so happens to be ~10MB/s faster than every other drive reviewed today.

In terms of 4K reads, the top drive here is the Corsair Voyager GT which scored a whopping 21.66MB/s. This means that those looking for a flash drive for a USB bootable Linux distro or something will find the Voyager GT or the SanDisk Extreme an excellent choice. 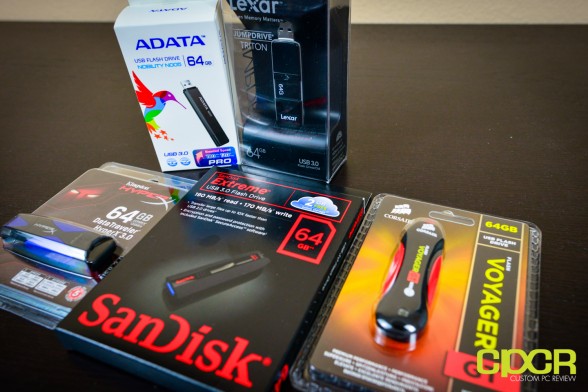 Considering each drive was able to put out extremely fast numbers in comparison to our reference USB 2.0 flash drive, I decided the best way to conclude the roundup was simply through a chart rating each drive’s build quality, design, performance, price, and “extra credit” or value added features.

Overall build quality and durability was quite good among all the drives, but I think it’s safe to say that the top drives here are the Voyager GT and the Kingston HyperX. The Voyager GT is especially impressive given that Corsair has given it a rubberized coating making it about as impervious to shock as it gets. Kingston’s thick plastic solution feels quite ruggedized as well, which is why these two gets our top marks in the build quality department. Additionally, the Lexar JumpDrive Triton is worth a mention as well. It has a very nice metal finish on the back as well as a nice, high quality finish on the front, but ultimately the slider isn’t anywhere near as smooth as what SanDisk has done with their Extreme drive and the front glossy finish is quite vulnerable to scuffs and fingerprints.

In terms of design, the Corsair Voyager GT and the Kingston HyperX definitely stood out as having an awesome ruggedized design along with excellent color schemes to match. The Lexar JumpDrive Triton is an amazing drive in the design department as well carrying not only a slider style design for protecting the USB connector when not in use, but also sporting a beautiful metal finish on the back of the chassis.

One very special thing to note as well is the performance achieved by the SanDisk Extreme in the 4K read/write department, producing 4K writes much faster than every other drive reviewed today, and was able to churn out some very balanced sequential read/write numbers, pushing 204.9 MB/s and 181.6 MB/s respectively. 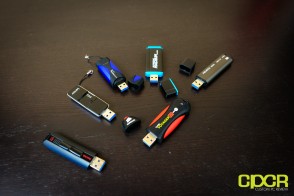 Moving onto our “extra credit” section here, we gave 3 points for lifetime warranties and 1 point for the more standard 3 or 5 year warranty. Additionally, any included software brought home an extra point and included side accessories brought home an extra point as well. Of the drives tested today, the ADATA N005 Pro, the Lexar JumpDrive Triton and the SanDisk Extreme all carried lifetime warranties with the Corsair Voyager GT, Patriot Supersonic Magnum, and the Kingston HyperX carrying still respectable 5 year warranties.

In the included accessories department, both the Lexar JumpDrive Triton and the Kingston HyperX came with small lanyards for attaching the drives to a backpack or a keychain.

Finally in terms of software, the only drive that featured any sort of software was the SanDisk Extreme, which came with SanDisk’s own SecureAccess software, which allows users to encrypt files stored on the drive. It also includes access to 2GB of cloud storage as well, but with plenty of free services on the market already offering services like this, it’s not much of a value add.

In terms of price, we did some research at Amazon.com and found the most expensive USB 3.0 flash drive tested today to be the 64GB Lexar JumpDrive Triton carrying a premium pricetag of $139.99. This is followed by ADATA’s Nobility N005 Pro at $112.09, Kingston’s HyperX at $105.74, Corsair’s Voyager GT at $99.99, Patriot’s Supersonic Magnum at $83.68, and finally the SanDisk Extreme currently at $83.57. Of course, price is going to be largely dependent on where you shop, when you shop, and any promotions available at the time, so it’s always important to check prices prior to purchasing (which is why you should take advantage of any back to school sale there is).

While all drives performed very well, both the Kingston HyperX and the SanDisk Extreme USB 3.0 drives stand out from the rest, and are highly recommended for their top-notch performance, design and pricing.

Special thanks to SanDisk, Kingston, Corsair, ADATA, Lexar, and Patriot Memory for making this review possible.

The roundup has been updated on 08/16/2012. Please check the next page for more details!

After publishing the review on 08/14/2012, I was informed by ADATA that the ADATA Nobility N005 Pro 64GB USB 3.0 flash drive can actually be found from various Amazon retailers for as low as $55.99, which is approximately $56.10 cheaper than the price of $112.09, which was the price found during the time of the review. For some reason, there were two SKUs of the same product through Amazon, which caused this confusion.

As you may imagine then, this new pricing will have a significant impact on our final scoring of the drive. Below, I have updated the scoring chart to reflect the ADATA N005 Pro at the $55.99 pricepoint. Additionally, the purchase link has been updated to the cheaper SKU.

As you can see, the ADATA’s price rating has been updated from a score of 3 to a score of 6 and the final score on the drive is now a total of 16 points, which means it now scores on the same level as the Lexar JumpDrive Triton. The reason a final score of 6 was given to the price is because the price point of $55.99 is significantly cheaper even when compared to the least expensive drive in this roundup, the SanDisk Extreme, currently priced at $83.57. I’d also like to reiterate that you should definitely check pricing on all the drives prior to purchasing as pricing, especially in the computer hardware market, is extremely volatile.

While this isn’t common practice here at Custom PC Review, I’ve also decided that it would only be fair to update the award on the ADATA Nobility N005 Pro 64GB to a CPC Certified Silver award. Its lifetime warranty, relatively low pricetag, and significant performance improvement when compared to USB 2.0 flash drives makes it an excellent choice for those looking for an entry level USB 3.0 flash drive.