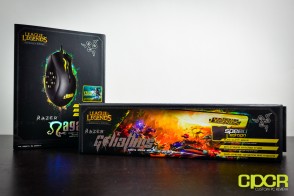 While I’m not a hardcore gamer by any means, one of the games I’ve found myself playing quite often over the past year or so is League of Legends (aka LoL). It’s a fast paced, team based game based on the popular Defense of the Ancients (DoTA) map from Warcraft III and lately it’s become extremely popular.

How popular you may ask? Over the past couple years, LoL has seen so much growth that a number of LoL tournaments have had multi-million dollar prize pools, the highest ever seen for competitive gaming to date. Being popular of course also means that there’s lots of money to be made in licensed gaming products and when it comes to licensed gaming products, you can pretty much count on either Razer or SteelSeries to be the ones to provide them.

Luckily for Razer, it seems like they’ve been blessed as the official gaming peripherals partner for LoL, so today we’ll be reviewing the Razer Naga Hex and the Razer Goliathus LoL gaming peripherals. Now usually I don’t like doing branded product reviews. They’re generally just paint jobs on products that already exist (and usually stuff I’ve already reviewed), so it’s quite pointless for me to review them all over again. However, since I’ve never had a chance to review the original Naga Hex or the Goliathus, and myself being a fan of the League of Legends (LoL) franchise, I just had to get my hands on Razer’s latest introductions.

Are Razer’s latest LoL peripherals really worthy of the LoL brand? Or is this just another money making scheme preying on loyal fans? Let’s find out!

A Closer Look at the Razer Naga Hex 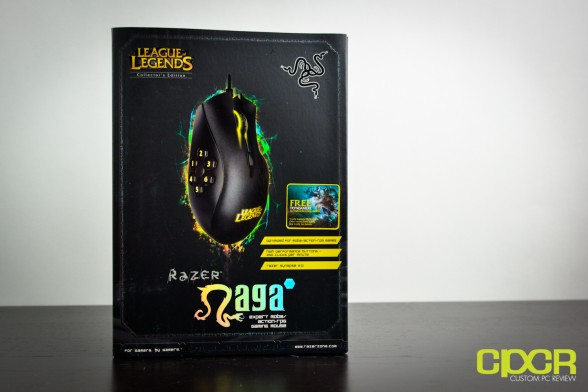 Here’s a look at the packaging for the Razer Naga Hex LoL Edition. 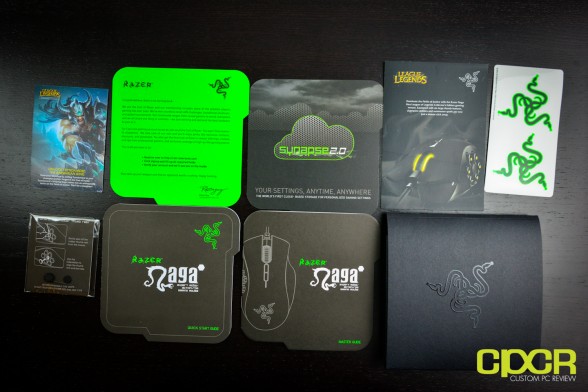 Included is the usual Razer goodies which include the Razer stickers and documentation along with additional interchangeable thumbrests and a special coupon which can be redeemed to unlock the character Tryndamere. 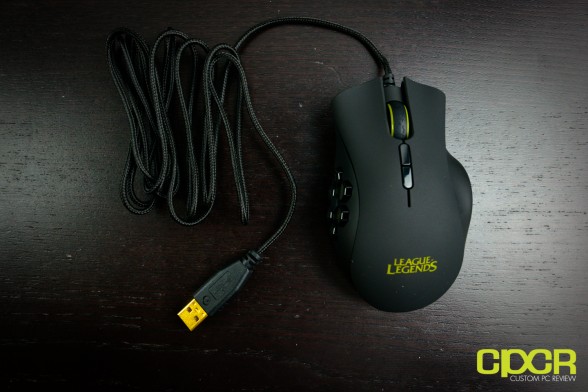 Here’s a look at the Naga Hex LoL Edition. We pretty much just have the Naga Hex except with League of Legends branding and a different finish. Let’s take a closer look. 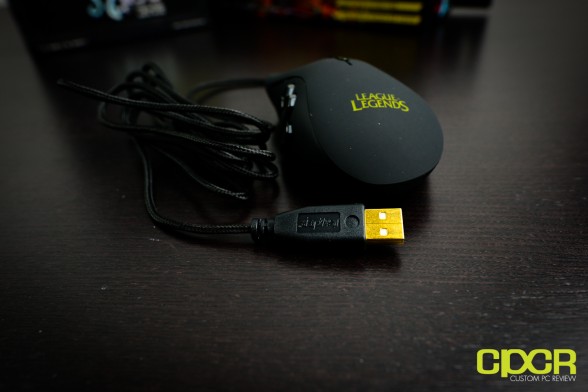 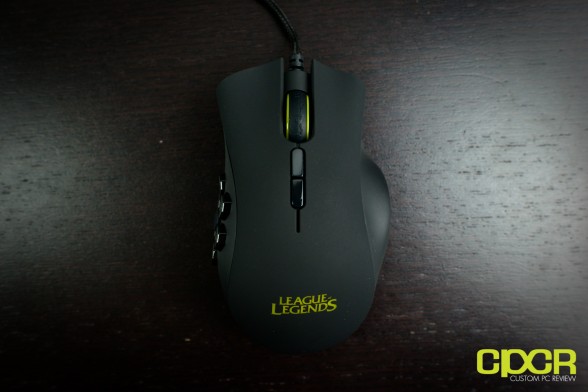 Here’s a look at the top of the mouse. There’s the left click, right click, scroll wheel, along with two buttons underneath the scroll wheel as well. The entire mouse is finished in a smooth plastic. Where the Razer logo is located on the original Naga Hex is now a League of Legends logo. 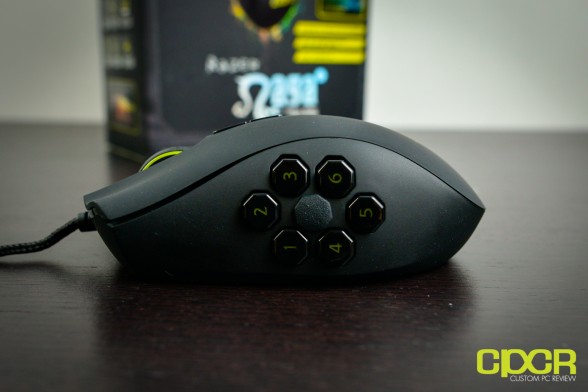 On the left side of the Naga Hex LoL Edition, we get six buttons labeled 1-6 along with a thumb rest. 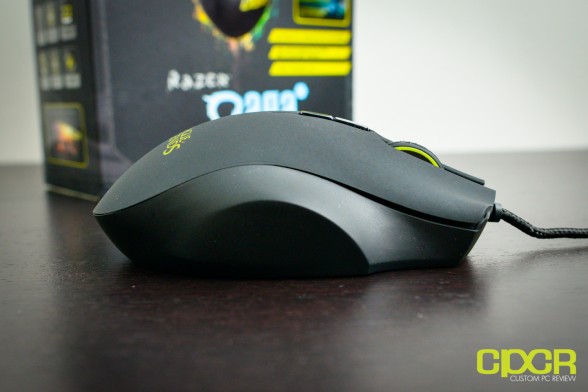 On the right side of the mouse there’s a small piece that protrudes from the mouse which acts as a rest for the ring finger and allows the pinky to grip. 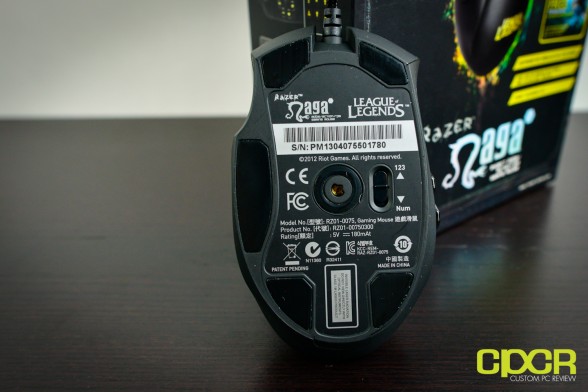 At the bottom of the mouse we get six Teflon feet which will allow the mouse to glide well along any surface. At the center of the bottom we get a 5,600 DPI Razer Precision 3.5G Laser sensor, which in other words translates to the 5,600 DPI Phillips Twin Eye laser sensor. There’s also a switch next to the sensor as well, which allows you to change between the numpad profile and the default number profile. More on that later. 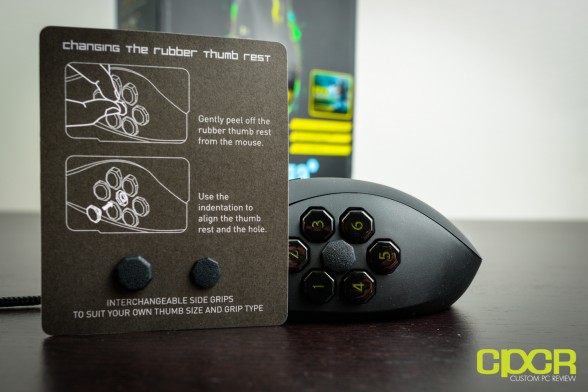 The side grip can be changed out to suit your thumb size. 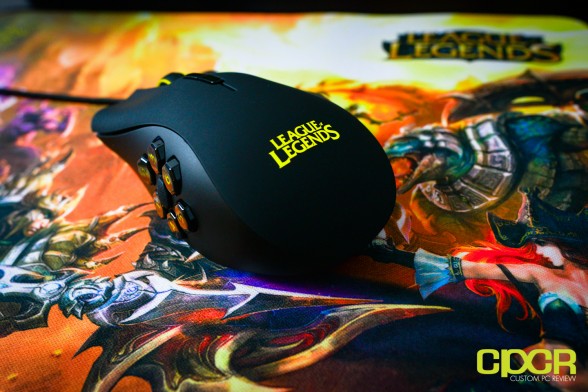 Here’s a look at the Naga Hex LoL plugged in. The LoL logo, the number keys on the left side, and the scroll wheel light up yellow.

A Closer Look at the Razer Goliathus 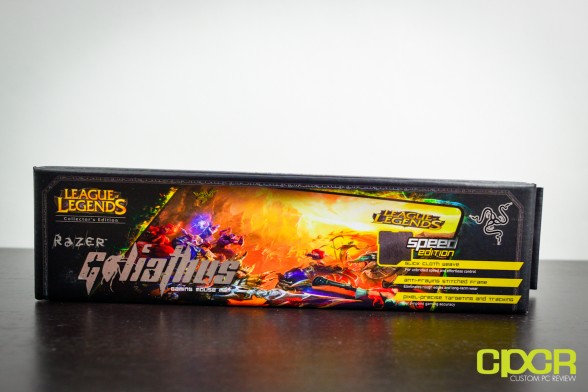 Here’s a look at the Razer Goliathus LoL gaming mousepad. 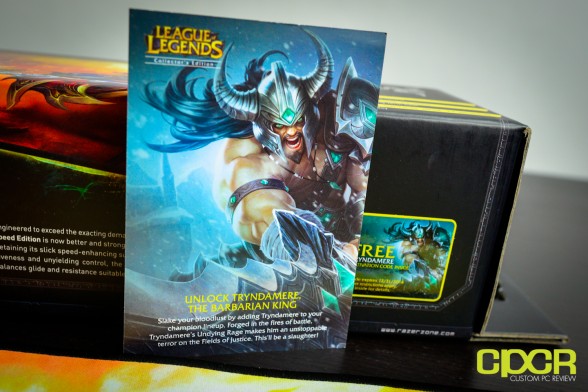 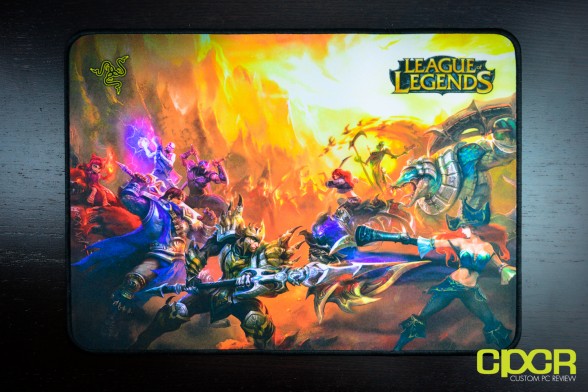 The Razer Goliathus LoL is pretty much identical to the original Razer Goliathus Speed Edition except with LoL artwork. The mousepad itself is a speed oriented smooth cloth mousepad. 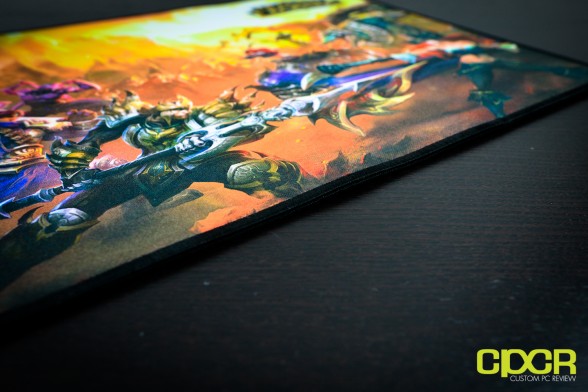 With the Goliathus LoL Edition, the weave on the mousepad is extremely taut, which helps reduce friction and increase mouse movement speed. The edges of the Goliathus LoL are stitched as well to prevent fraying. 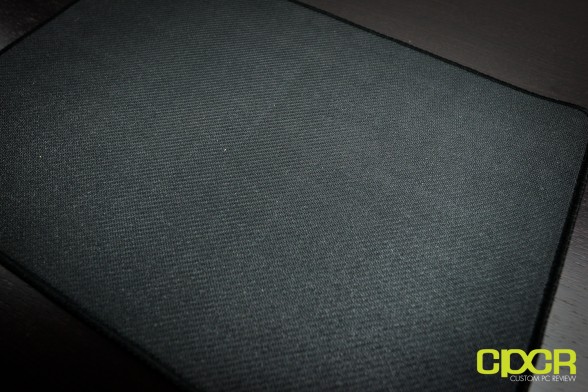 The Naga Hex LoL Edition like most other Razer products on the market these days uses the Razer Synapse 2.0 software. This allows syncing  of preferred settings to the cloud so settings can be retrieved by any computer anywhere an internet connection is available. 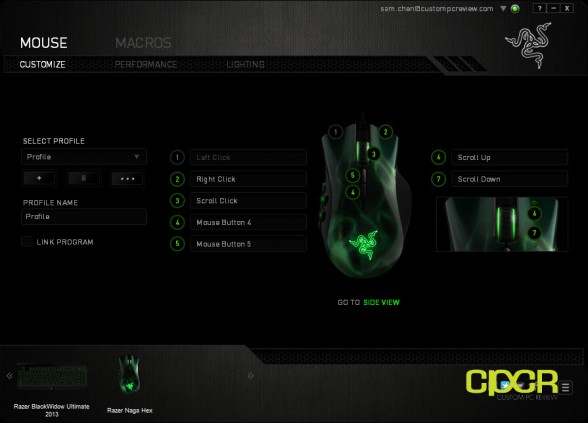 Here’s a look at the mouse customization menu. Changing the functions on the keys are a simple point and select type of deal. 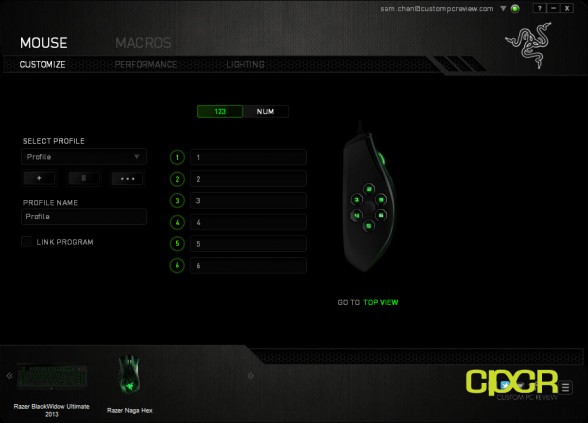 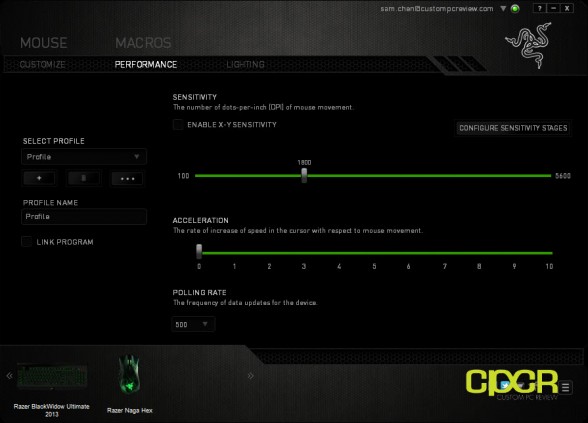 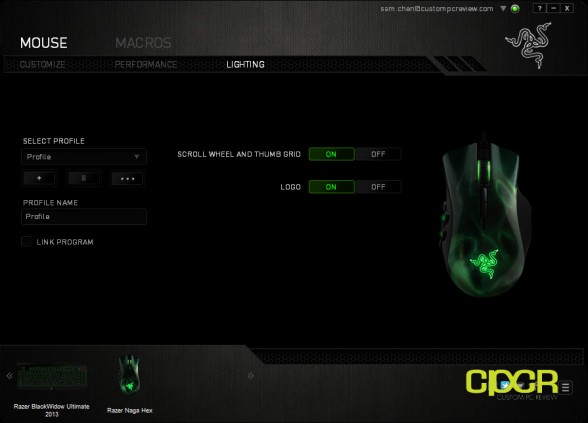 Here’s a look at the lighting options. The mouse itself only glows has yellow LEDs and the options only allow for either on and off. 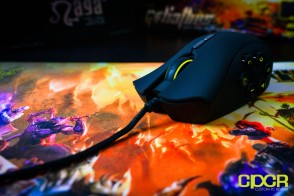 Since the Naga Hex LoL edition mouse is designed for LoL, I spent the majority of my time testing the mouse with LoL and so far I like the Naga Hex. While the game doesn’t really require a ton of keys to begin with, I did find that the macro buttons are particularly useful when used for summoner spells as it allows most of the left hand to concentrate on casting champion abilities. The claw grip optimized design of the unit also feels great for me personally as that’s my grip of choice when gaming as it helps provide me with better precision.

The sensor used on the Naga Hex LoL is the 5,800 DPI Phillips Twin Eye sensor (Razer 3.5G Laser Sensor), which is the sensor Razer has equipped most of their previous generation mice with. Since the Naga Hex LoL is just a rebadging of the Naga Hex, it unfortunately didn’t get an upgrade to the Avago-9800 (Razer 4G Laser Sensor) which is the new laser sensor being used with the latest Razer mice such as the Taipan and the Ouroboros. While the Phillips Twin Eye sensor doesn’t have issues with acceleration, it still has a pretty serious Z-axis issue. Unfortunately during testing, this issue is present with the Naga Hex LoL and every time the mouse is lifted, the cursor will jump about 20-30 pixels to the bottom right. 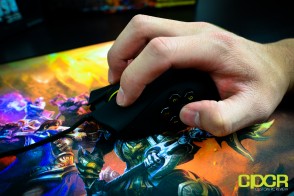 Comfort wise, I think the Naga Hex is pretty good. As a palm grip mouse, the Naga Hex LoL is just alright. I feel like the length of the mouse is a bit short and it’s difficult to reach buttons when using the palm grip, so it doesn’t quite work out that well. As for the fingertip grip, I find that the back end of the mouse is far too heavy compared to the front, so it doesn’t work all that well either. That said, Razer has pretty much purpose built the mouse to be a claw grip style mouse and it works extremely well. Each finger has a spot on the mouse and it’s extremely comfortable to hold the mouse in this fashion.

The six side macro buttons are decently sized and aren’t crowded by the hundreds of buttons you’d find on the original Razer Naga or the Logitech G600.  This made finding the correct keys easy without having to actually look the the mouse while in game. Additionally since I tend to use the claw grip while gaming, the Naga Hex’s thumbrest is fantastic as it prevents me from having the issue of accidentally hitting all the macro keys when moving the mouse around like I did with the Naga and the G600. 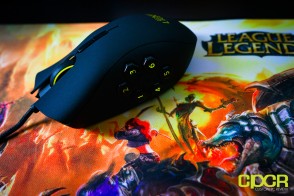 As for performance, the Naga Hex LoL does a great job for the game it’s designed to play – LoL. Tracking is good, and I wasn’t able to detect any angle snapping or acceleration issues with the sensor, so I’m definitely happy with that. The six macro keys on the left side of the mouse also provide plenty of macros to get by without overwhelming you with too many buttons, so that’s good for those who actually use a macros. 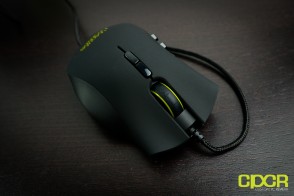 The only problem I have with the Naga Hex LoL is Razer’s decision to stick with the older Phillips Twin Eye sensor rather than move to Avago’s latest 9800 laser sensor or the Avago S3888 optical sensor. Unfortunately the Phillips Twin Eye still has the Z-axis issue, which can be annoying for low sensitivity gamers or those playing on a smaller desk area. However, as long as you can get away with not lifting the mouse off the table, you shouldn’t notice any problems. Since I don’t usually lift my mouse all that often in LoL, it’s not a huge deal, but I find this is an extremely annoying issue when doing stuff like sniping in FPS games as lifting the mouse will throw off your carefully lined up scope.

Pricing on the Naga Hex LoL is $89.99 and should be available now although I couldn’t find any units in stock anywhere. The original Naga Hex on the other hand is currently available for $60.99, which is about a $29 difference with the LoL edition. Overall I think if you’re a huge LoL fan, you like having some macro buttons (but not too much), and you don’t lift the mouse off the table that often, the Naga Hex LoL is a mouse you should be interested in. Although I do wish Razer made some enhancements under the hood with the Naga Hex LoL, there aren’t any major reasons as to why I wouldn’t recommend it. 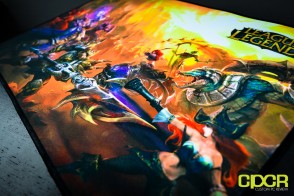 After spending the past couple weeks playing on the Razer Goliathus LoL mousepad, I can definitely say that the mousepad has quickly become one of my favorites. Tracking on the mousepad is accurate, and most importantly the Goliathus really allows for a better and more consistent glide than using the bare tabletop.

Pricing on the Razer Goliathus LoL mousepad is $19.99, which isn’t too bad at all. The mousepad definitely feels like it’s constructed of very high quality cloth and the edges are stitched as well for enhanced durability. The original Razer Goliathus currently retails for $19.99 as well, so there isn’t any premium being charged for the LoL branded version. Considering the fact that you get the beautiful LoL artwork on the mousepad along with a free unlock code for Tryndamere, it makes the Goliathus LoL a better deal than the original Goliathus especially for those who play LoL.