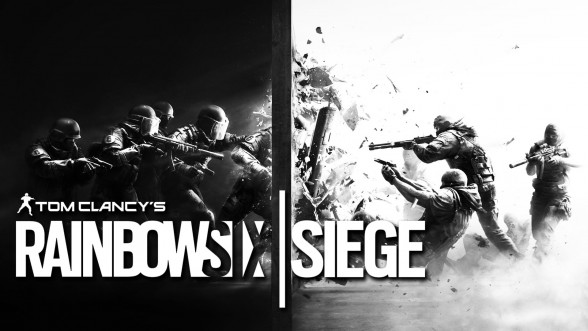 Rather than tacking on a huge, complex single player campaign no one really cares about, Rainbow Six Siege keeps it simple with the latest game in the series. A new terrorist group called the White Masks have waged a war against the entire world, their goals are unknown, and their methods are despicable. A mysterious government figure called Six revives and reactivates the Rainbow Program to stop them. Despite what you may have read on the internet by RazordogJ420, this is a good thing. You see, this nerd called Shakespeare once said “brevity is the soul of wit”. In modern English this roughly translates to “get to the point”. Below is an example of how other shooters handle the single player story. 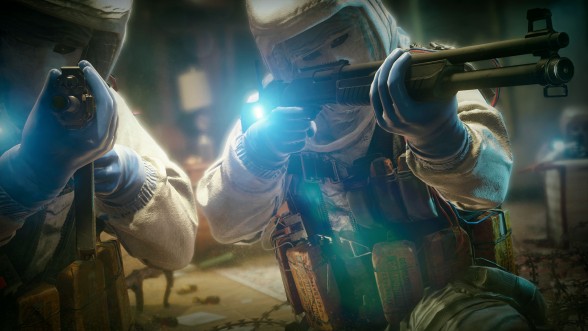 “As Staff Sergeant Max Fightmaster you must kill every single White Mask in the world to avenge your brother and prove your love to your emotionally unavailable wife. In the process you just might save the world, and your soul. For your see, secretly, you used to be a member of the white masks along with your brother, who was betrayed by their leader Victor Von Frankenstein, but in a shocking, rocking, limousine-ridin’, jet-flyin’, kiss stealin’, wheelin’ dealin’ reveal, your brother is actually alive and leading the White Masks. Press F to pick up your jaw.”

… And if he were talking about Siege he’d be right.

At the time of writing there are 20 operators, 10 for offense and 10 for defense, each with access to a variety of different weapons and special gear to choose from, each countering or synergistic with each other in some way. 10 unique maps, featuring both day and night versions, and 3 game modes to choose from. Game modes include Situations, Terrorist Hunt, and Multiplayer. Situations serves as the game’s single player experience, placing you in the role of an operative from the Rainbow Program tasked with performing various counter-terror missions. There are 10 to choose from, each taking place on one of the currently available multiplayer maps. Situations mode isn’t exactly a tutorial, it can be fun and challenging at times, but it works as a nice place to get your bearings before jumping headfirst into the madness that is multiplayer. Terrorist hunt provides a similar single player experience, but with more player control, as you can choose your operative and loadout. Additionally up to 5 people can play terrorist hunt together when you’re in the mood some co op VS AI. 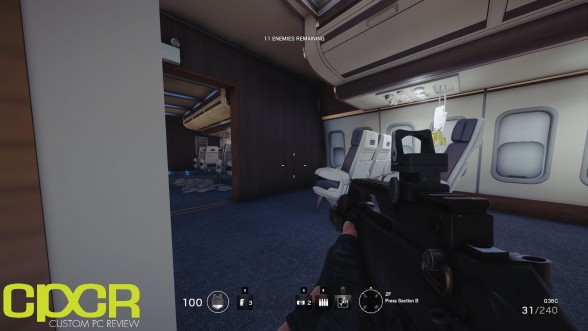 Tell me your secrets, wall..

According to E-40, “Life is something you can’t borrow and give back; Here today and gone tomorrow…just like that” This dude must have played a lot of Siege, because every life is precious in this game. Human beings are fragile creatures, often dying after one or two well placed shots. This means every time you stick your neck out, there’s a chance you’ll be punished for it. This promotion of thoughtful, tactical gameplay is a welcome one. It also helps create Siege’s incredibly intense atmosphere and mood. Players have to be cautious and aware, sometimes so excessively that everyone jumps at shadows, leading to friendly fire. That’s right kids, you can kill everyone in this game, including your friends! Which I did. Repeatedly. But death isn’t always the end, once you’re killed, you’re actively encouraged to watch and control the strategically placed cameras across the map, making callouts and alerting your team to what you see can sometimes be instrumental to winning a game. And if the cameras are destroyed, you can still see the world through your teammates eyes and hopefully guide them along. Talking to my dead friends was my first step towards insanity. 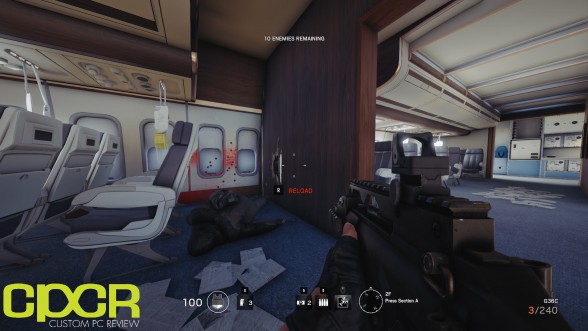 I knew I couldn’t trust you.

Siege is all about using and abusing the environment better than your opponents. Walls and ceilings are almost completely destructible, windows can be broken, cover can be destroyed,(I once uttered the phrase “I don’t trust that couch”) buildings can be scaled and then systematically demolished floor by floor. A lot of games boast about destructible environments, but siege was a truly exhilarating experience the first time I played. The ability to punch a makeshift murder hole in a wall, or completely remove that wall with a giant sledgehammer was intoxicating. I wandered around laughing like a maniac toddler destroying whatever I could. This was my second act of depravity. 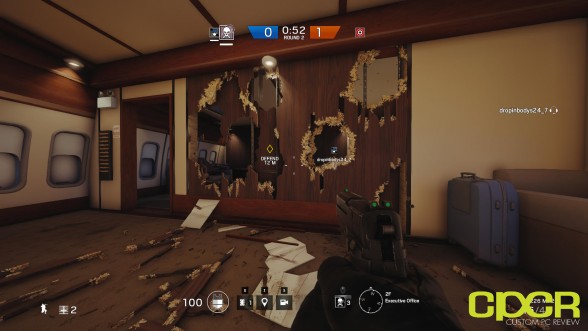 Thanksgiving with the Miller family

Once the novelty of shouting Hammer Time every game wore off, I noticed just how much Siege excels at promoting teamwork. You simply must work together to win, there are too many moving parts for a lone wolf to be successful. For example, my friend playing the IQ operative used his special ability to find an explosive attached to a door we were about to breach, he then tagged it so I could use my EMP grenade to disable it. Earning us both bonus renown. If he’d of just run through the door looking for headshots he’d have killed us both, costing our team 2 operatives. One of them being an extraordinarily good looking one.

The defining characteristic of Siege, that which sets it apart from other shooters is the expertly crafted atmosphere. Sneaking through a warehouse the enemy team is holed up in, checking every window, door, and wall for some kind of trap is an amazing exercise in paranoia. Defending teams get their fair share of scares too; thanks to some expert sound design and a lack of background music, every explosion, footstep, and pane of glass shattering is distinct and frightening. I once told my friends to stop talking because I could hear “them” coming like I was schizophrenic. At the end of some games I could feel my heart pounding as we barely scraped by.

While other shooters seek to capture the feel of summer blockbusters through scripted events and memorable set-piece-like-maps, Siege creates it’s own memorable moments through gameplay and tone. I found myself separated from my team, hiding under a desk, taking potshots through walls and windows while the enemy team peppered my position with grenades. I survived, pieces of my desk everywhere, out of ammo, dead bodies around me. My team secured the rest of that match. I’ve never hidden under that same desk again, that’s not how this game works, it’s not a viable strategy. But that one memorable moment is like a hundred others I’m sure will spring up naturally through playing the game.  At this point the man I used to be was long gone. Replaced by a shell driven by animal instinct and renown boosters.

Speaking of renown boosters, let’s talk about micro transactions, AKA Literally Hitler. There is Renown earned at the end of every match, renown can be spent on operatives and some weapon skins. There are also challenges doled out to each player with a renown award attached. Example “get 4 headshots in a single game, earn 200 renown!” So renown is plentiful for now. But the game is still young, and I fear that after you unlock a decent number of operatives, coupled with the announcement of new ones being added to the game, some grinding will be required to afford them all. Then there are R6 Credits, these cost real money (not Monopoly money, sadly) and are pretty much optional. There are exclusive R6 Credit skins, but you can honestly live without them. There’s no real need to ever buy these unless you want more skins or to earn renown faster while supporting the game. So there it is, no one is trying to rip you off and force you to buy things. RazordogJ420 can rest easily. 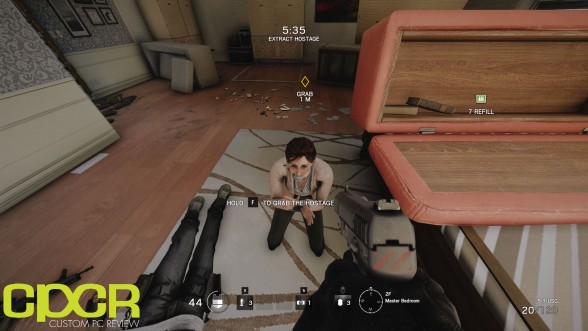 There’s also a horde of other graphical settings including Lens Effects, LOD Quality, Reflection Quality, Shading Quality, Shadow Quality, Texture Filtering and of course Texture Quality settings. While this is an NVIDIA GameWorks enabled title, it lacks some of the more taxing features the SDK is synonymous for, such as NVIDIA’s HairWorks or God Rays; which use advanced Tessellation techniques for more realistic hair and lighting effects. It’s clear Ubisoft is targeting a wider install base for this title. This makes sense considering their ambitions to go head-to-head with the likes of CS:GO , which as we know is not a very graphically intensive game at all. That’s not to say that Siege can’t get a date for prom, it’s actually quite nice. But, it’s definitely not as dreamy as the beefier, chisel-chinned quarterbacks like Star Wars Battlefront. But with constant explosions, and huge amount of destructible environments, It makes sense for Ubisoft to tone down the graphical requirements a bit to keep them from getting in the way of the nail-biting gameplay. 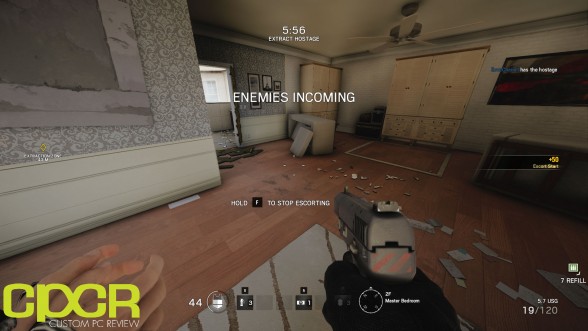 The kidnapping I’d forgiven them for, but dragging their muddy boots across this beautiful hardwood floor? They had to pay the price.

Rainbow Six Siege is not a perfect game. At the time of writing there are numerous bugs being reported on the official Rainbow Six subreddit, matchmaking errors occur fairly often, and there are some small quality of life fixes I’d love to see implemented in the future (I really need to know what the objective is BEFORE I choose my operator). But despite some flaws the dev team are fully aware of — and working on, I can’t deny how enjoyable Rainbow Six Siege truly is. The focus on gameplay, teamwork, and atmosphere rather than accessibility and marketing has definitely paid off. They’ve crafted a uniquely slower paced, yet incredibly intense shooting experience that requires your patience and brain power just as much as your reflexes and gunskill.

People have been quick to judge this game thanks to the $60 price tag and lack of story as if that’s something new, but they’re missing out on a game that dares to be different, demands your attention, and deserves your time. I don’t believe in numbers defining games, but I’m willing to rate this one an incredible E 40 out of 10.

Ubisoft provided CustomPCReview with a review copy of the game, but by time I’d learned about that I’d already bought it myself. I also bought some pants that fit me better that day, but that’s besides the point.