A couple days ago, we reported on a rumor that AMD may be on track to releasing a new dual GPU monstrosity known as the Radeon R9 295 X2 on April 8, but no images or exact specifications were provided. Thanks for Chinese website Chiphell however, we get the first images of what’ll likely be the most powerful graphics card in AMD’s lineup. 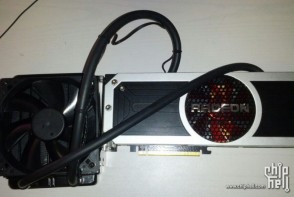 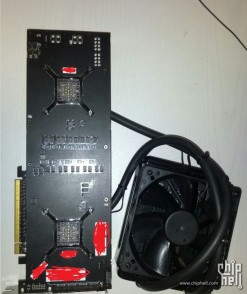 So far, two images were leaked along with a spec chart for the upcoming graphics card. The images show that AMD is overcoming cooling issues with their latest dual GPU solution by using a hybrid cooling solution. The two GPUs onboard will be cooled by a dual fan, 120mm radiator AIO watercooling loop while the rest of the components will be cooled with the usual shroud heatsink along with a single fan in the middle.

Spec-wise, the Radeon R9 295 X2 (Codename Vesuvius) is expected to include two of AMD’s flagship Hawaii GPUs giving us access to a grand total of 5,632 Stream Processors (2,816 each). Each GPU will contain 4GB of GDDR5 for a grand total of 8GB of GDDR5 running off a 512-bit memory interface.