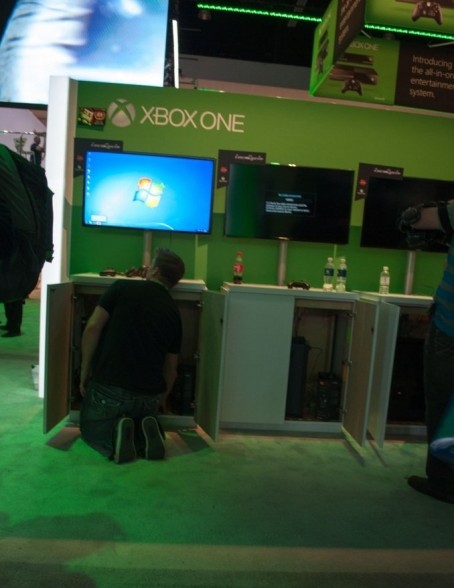 With both Microsoft and Sony recently announcing their latest and greatest consoles, this year’s E3 was jam packed with tons of new announcements from both companies and while Sony’s booth featured developer Playstation 4 units running their demos, it seems that unfortunately the same can’t be said about Microsoft with the Xbox One.

At E3, Microsoft’s Xbox One demo stations running many of the upcoming Xbox One game demos only had a single controller attached to a big screen TV with no actual evidence of an Xbox One powering the units. While this is fine and dandy since it’s always better security to keep things behind closed cabinets, it seems like Microsoft may have had another reason for doing so… 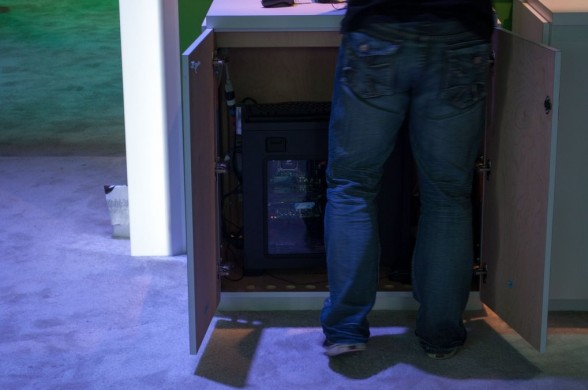 After a number of sources have confirmed reports of the demo systems crashing into Windows 7 based desktops, some members of the HFBoards discovered that the Xbox One demos were in fact running full fledged high end custom gaming PCs that have hardware far superior than what we’d expect to find in the actual Xbox One. Score +1 for the PC gamer!

For starters we can see from the picture above that Microsoft is running a fairly large Nvidia GeForce GTX branded GPU, suggesting it’s more than likely a high end Nvidia 700 series graphics card, and for the processor some folks over at XS have noticed that it’s more than likely a LGA 2011 based processor (Intel Core i7-3820) being liquid cooled by an AIO water cooling solution. A gaming system spec’d similar to this generally runs in the neighborhood of $1,500-$2,000, which is a far cry from the $499 asking price of the Xbox One.  Considering both the Xbox One and the Playstation 4 are going to be using AMD designed CPUs and GPUs, I’d say this is a pretty embarrassing OOPS moment for Microsoft. And to think all of this could’ve been avoided by using a computer case without a window…. haha.

That said, it’s not the end of the world here as both the Xbox One and Playstation 4 are running off x86 architecture, and given the fact that many games nowadays are multiplatform, it makes sense that many of the developers are developing games on the PC then porting and optimizing for consoles after. However, it definitely sucks to know that the demos you’ve just played on display at E3 may have far superior graphics in comparison to what they’ll actually be when they become available on the Xbox One.