Nope! They’re still keeping their mouth shut… But, thanks to the guys over at Lenzfire who’ve leaked pretty much everything we need to know, we now have a good idea of exactly what’s coming, with what kind of performance we’re likely to see. 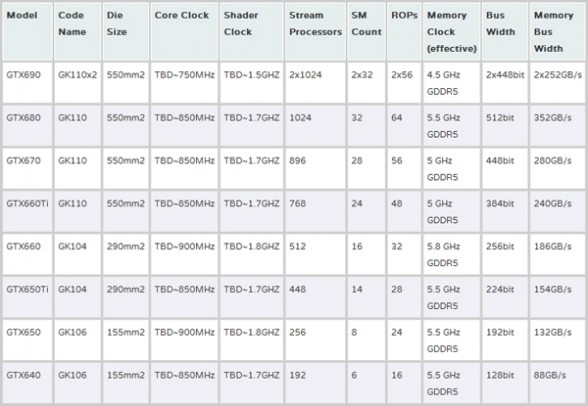 Here, we have a chart of the specs. Nothing new per say. We’ve seen most of the important stuff before from previous leaks, but we’re now getting an idea of the clock speeds and such. Then again, what kind of performance does x number of stream processors + x clock frequency translate into, right?

So, what do we have from the next chart?

Yup, the juicy stuff. Everything we need to know in order to make a semi-educated decision on buying the AMD Radeon HD7000 series now, or wait for Kepler. What an awesome chart. Wish it had some 3D Mark 11 scores or some benchmarks, but hey beggars can’t really be choosers.

From the looks of it, all cards are getting bumped up a couple notches in terms of performance, but the’re all getting a price bump as well so pricing is about the same. Nvidia’s flagship single GPU GTX 680 is now expected to come in at $649 in April 2012. It’s also expected to dish out ~45% better performance than the current single GPU champ, the AMD Radeon HD 7970.

Did I read that correctly?! ~45%?!! Yeah, won’t believe it till I see it, but that’s what the chart says. I mean… we all know that information on the internet is always 100% factual, right? Unfortunately, by April AMD will be done launching their entire HD 7000 series line of graphics cards and will probably be moving to the HD 8000 series, which, by the way, isn’t going to be codenamed Sea Islands. It’s actually going to be codenamed Canary Islands. Just saying!

Oh well. At least we now know for sure Nvidia isn’t going to be jumping to the 700 series in their naming scheme. For more details, hit the jump below.