With the holiday season quickly approaching, we have heard numerous rumblings that the 9th gen CPUs hinted at since last year will be arriving soon and thanks to a recent report by Wccftech, we now have a pretty reliable rumor that Intel will launch the new 9th gen CPUs with the Z390 series at the start of October. 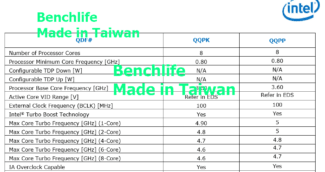 Starting off with the top dog, the Intel Core i9-9900K will be their 8-core and 16-threaded monster, being the first mainstream desktop i9 part it has some big expectations to fill. It packs a rather large 16MB of L3 cache as well as Intel UHD 620 graphics for those who actually plan on using integrated graphics with a high-end part. The leaked specifications reveal that it will have a base clock of 3.6GHz and a boost clock of 5.0GHz in dual-core configurations. 4-core boost is rated at 4.8 GHz while 6/8 core boost is rated at 4.7 GHz. The chip also receives a 95w TDP rating, which is on par with Intel’s i7 parts.

Most interestingly is the rumored prices. The Intel Core i9-9900K is expected to be priced at a very high $450 USD, creating a new price bracket for the mainstream, with the i7-9700K hitting $350, and the i5-9600K hitting the familiar $250 price point. If these rumors hold true, it’ll be interesting to see how these chips perform and AMD’s response.