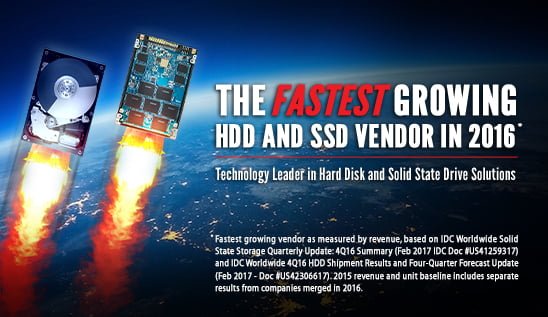 Despite their financial woes, Toshiba has reason to celebrate today as they were recently named the fastest growing HDD and SSD maker in both revenue and units in 2016 by market intelligence firm IDC.

According to the IDC “Worldwide 4Q16 HDD Shipment Results and Four-Quarter Forecast Update” report, Toshiba’s HDD unit market share increased by 9% in 4Q2016, reaching a total of 24% market share in the $25 billion HDD market in 2016. In 2016, Toshiba was the only HDD manufacturer to see an increase in revenue.

In addition to the good news in 2016, the outlook for 2017 is quite rosy for Toshiba as well. According to IDG Research VPs, John Rydning and Jeff Janukowicz, “With successful launches of new HDD and SSD products over the next few quarters to address demand from cloud service providers and the traditional IT market, Toshiba should be well positioned to sustain further HDD and SSD revenue growth in 2017.”