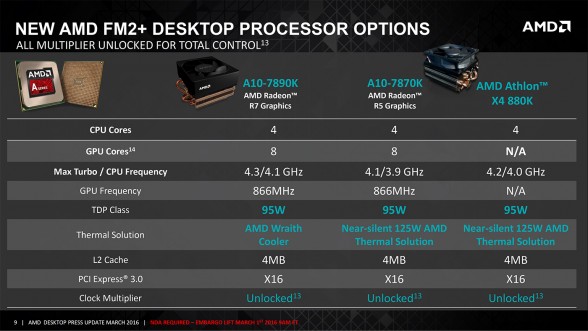 The AMD A10-7890K APU includes the same amount of CPU cores, GPU cores, and GPU frequency as the AMD A10-7870K except it now comes with a slightly higher 4.1GHz stock/4.3GHz turbo frequency on the CPU. Similarly, the AMD Athlon A4 880K comes clocked at 4.0GHz stock and 4.2GHz turbo.

Expect to see these new CPUs at your favorite retailers and e-tailers later  this month for consumer availability.

Pricing is as follows:

Samples should be arriving soon so keep up to date with us for future reviews!