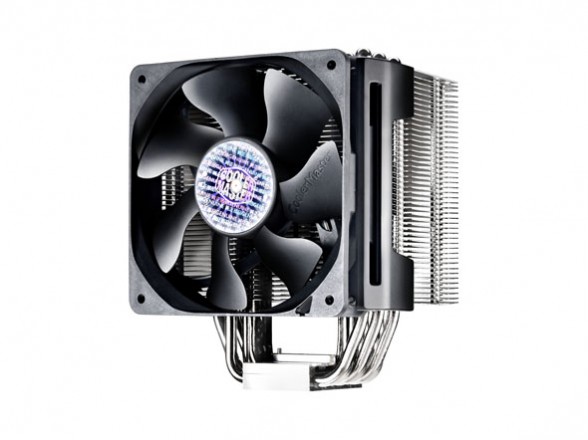 20 years ago back in 1992, Cooler Master started out as an OEM CPU cooler manufacturer after realizing a strong demand for CPU cooling with the emergence of the PC market. For years that’s all they did; however, with the continued success of their innovative cooling designs, they began expanding into the world of computer cases and, as of late, have even gone into the gaming peripherals and mobile accessories markets as well. Today, we’ll be taking a look at one of Cooler Master’s newest and most innovative CPU cooler designs, the Cooler Master TPC 812.

Coming from a long history of innovative Cooler Master CPU Coolers, the TPC 812 features a rather unique design. Most air coolers nowadays feature a base connected to usually a 6mm to 8mm heatpipe, which is then connected to a heatsink. Through this base to heatpipe to heatsink connection, heat from the CPU is transferred from the base of the cooler onto the fins of the heatsink then removed via the fans blowing over the fins. While the Cooler Master TPC 812 does have a full six 6mm heatpipes, it also features something a little different – two vertical vapor chambers capable of dissipating a full 120w of heat each… and that’s not even counting what the six 6mm heatpipes can do either.

Since I know some of you will be asking “What exactly is a vapor chamber and how does it work?”, I decided to explain it, but thanks to the folks over at Cooler Master, I ended up just borrowing their handy little graphic instead. As you can see, the despite the fancy name, a vapor chamber actually works exactly the same way as a heatpipe except it’s shaped like a heatpipe that’s been flattened. In a nutshell, heat gets absorbed by a liquid inside the vapor chamber, turns into a vapor and moves upwards, heat is then dissipated through the fins, and the now cooled liquid moves back down again for another round of heat dissipating action. As of now, the only company to offer both heatpipes and vertical vapor chambers on the same cooler is Cooler Master. 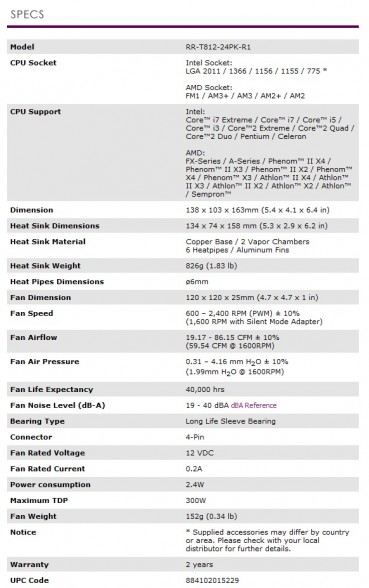 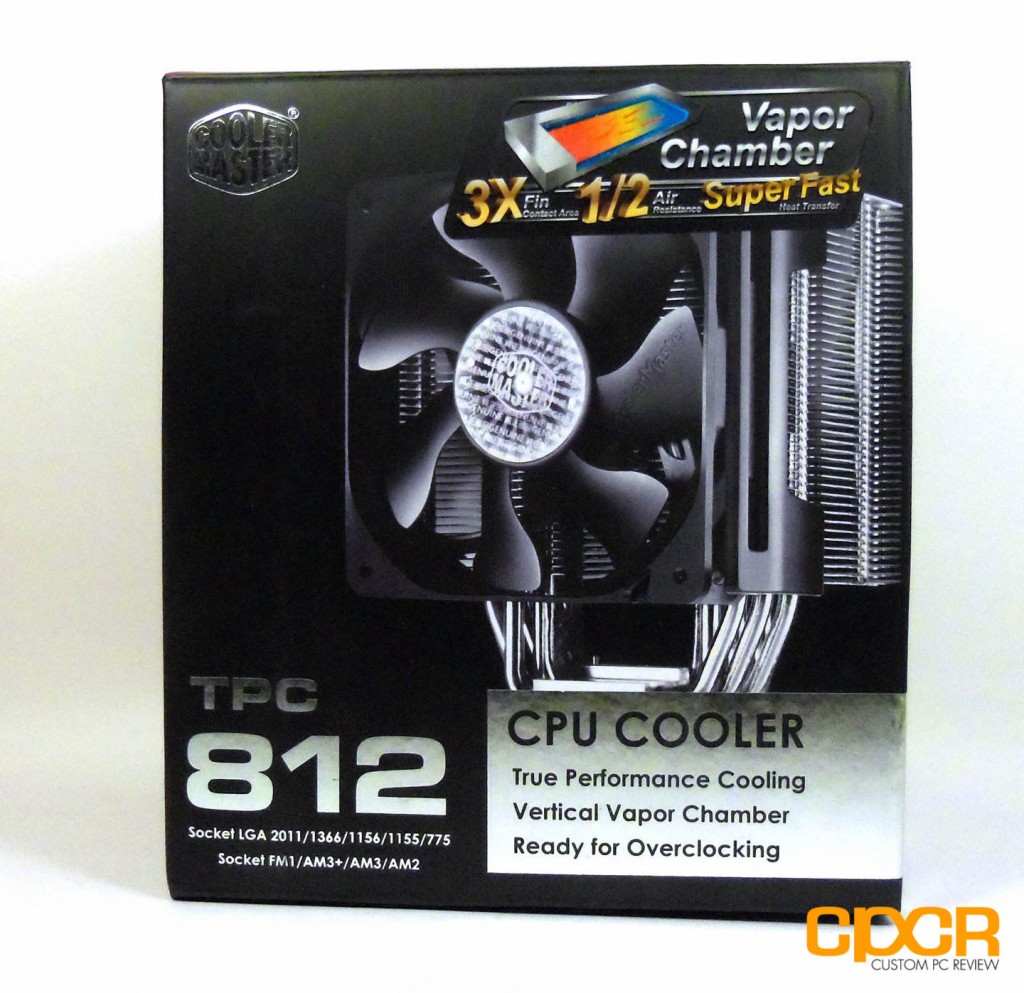 The front of the packaging for our TPC 812 features a graphic of the cooler, as well as some information on the vapor chamber technology. 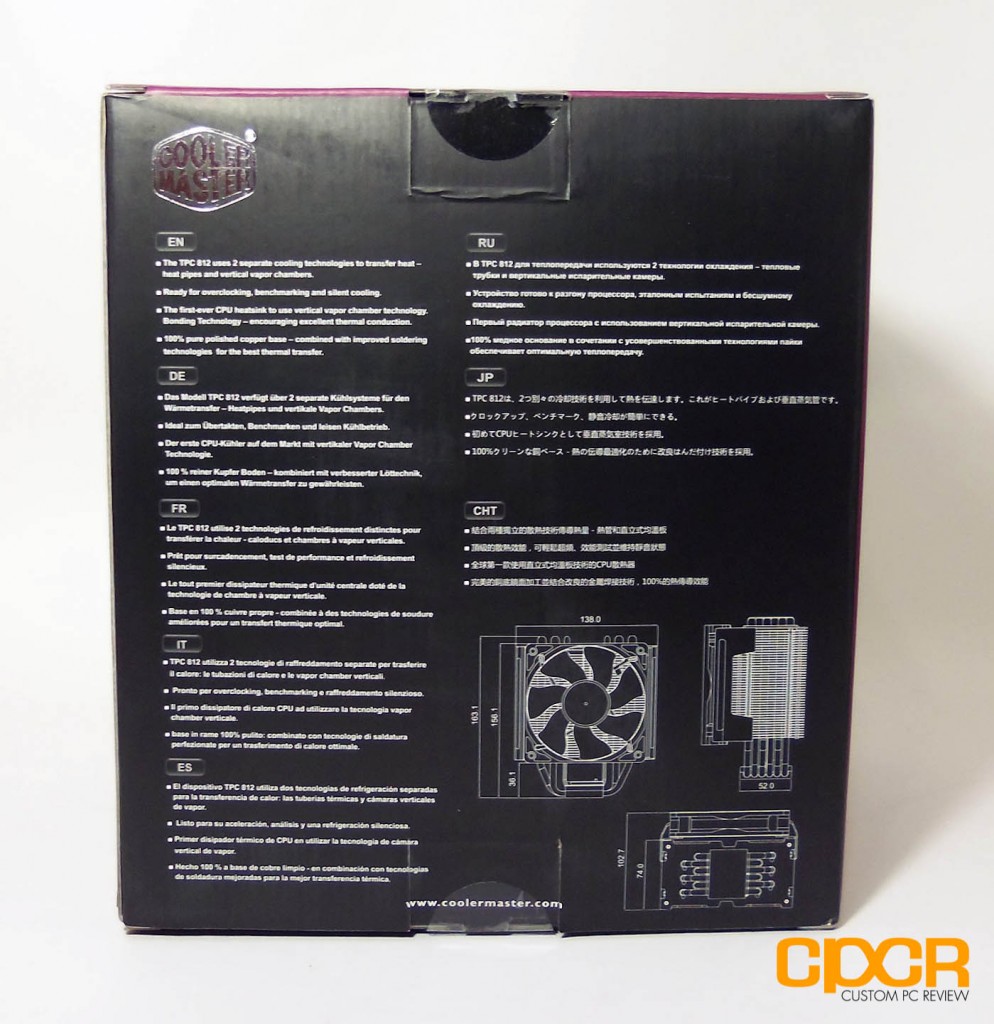 The back side of the box features the same information as the front, but in various languages. 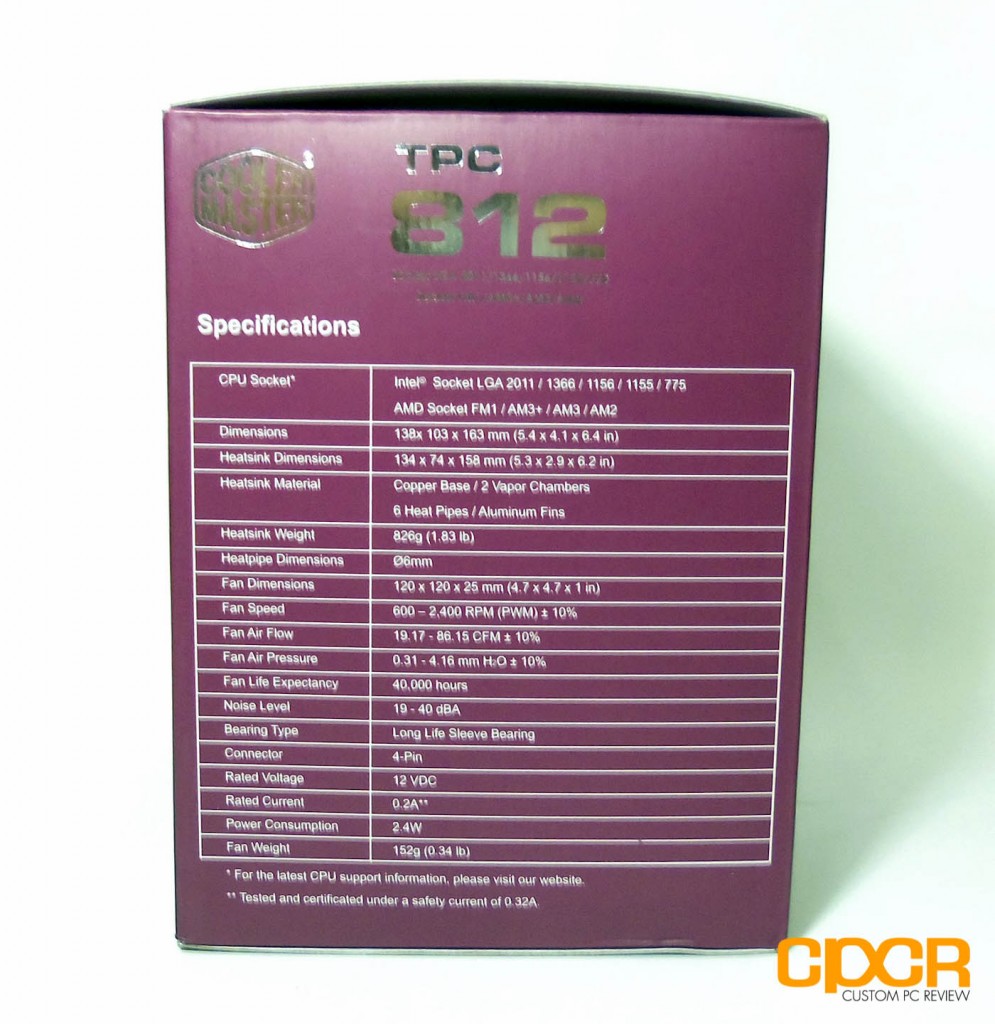 The side of the packaging lists all of our specifications, such as some info on our fan and materials used to manufacture the cooler. 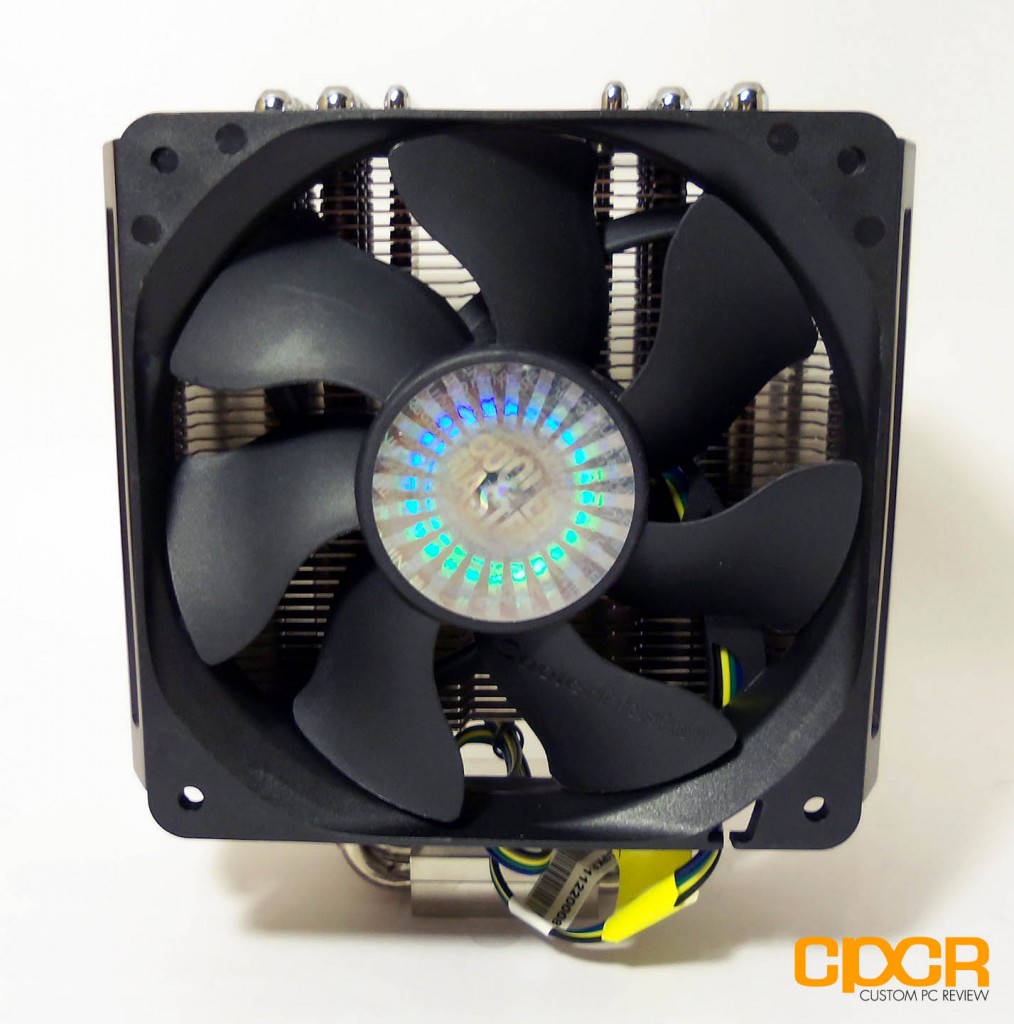 Once we open the box up we get our TPC 812, protected very well in a foam container. 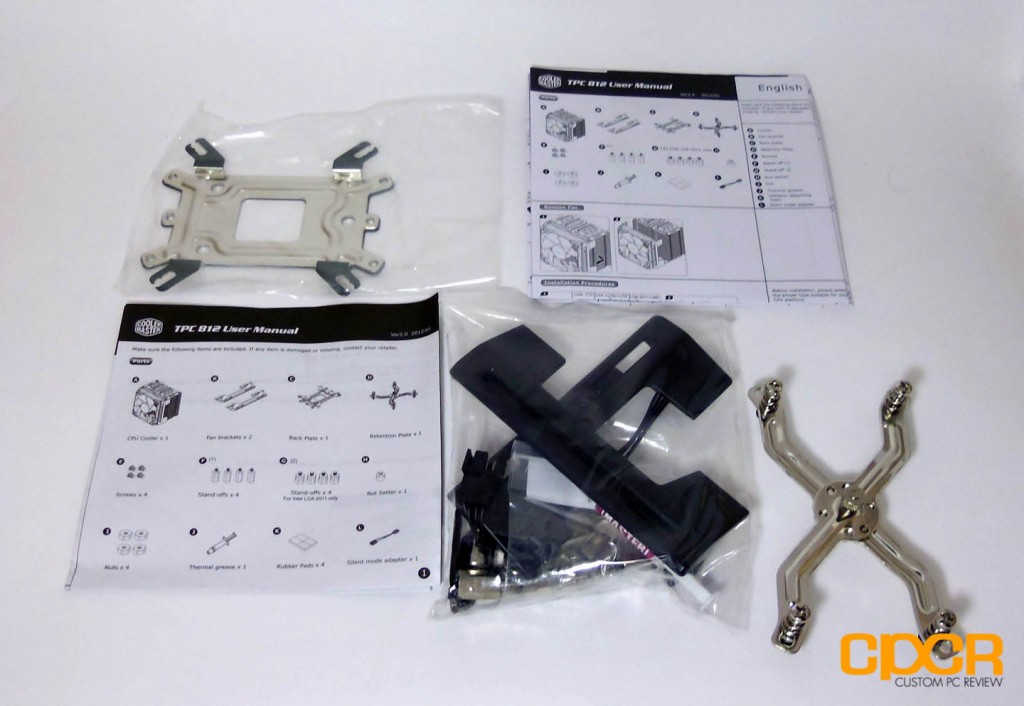 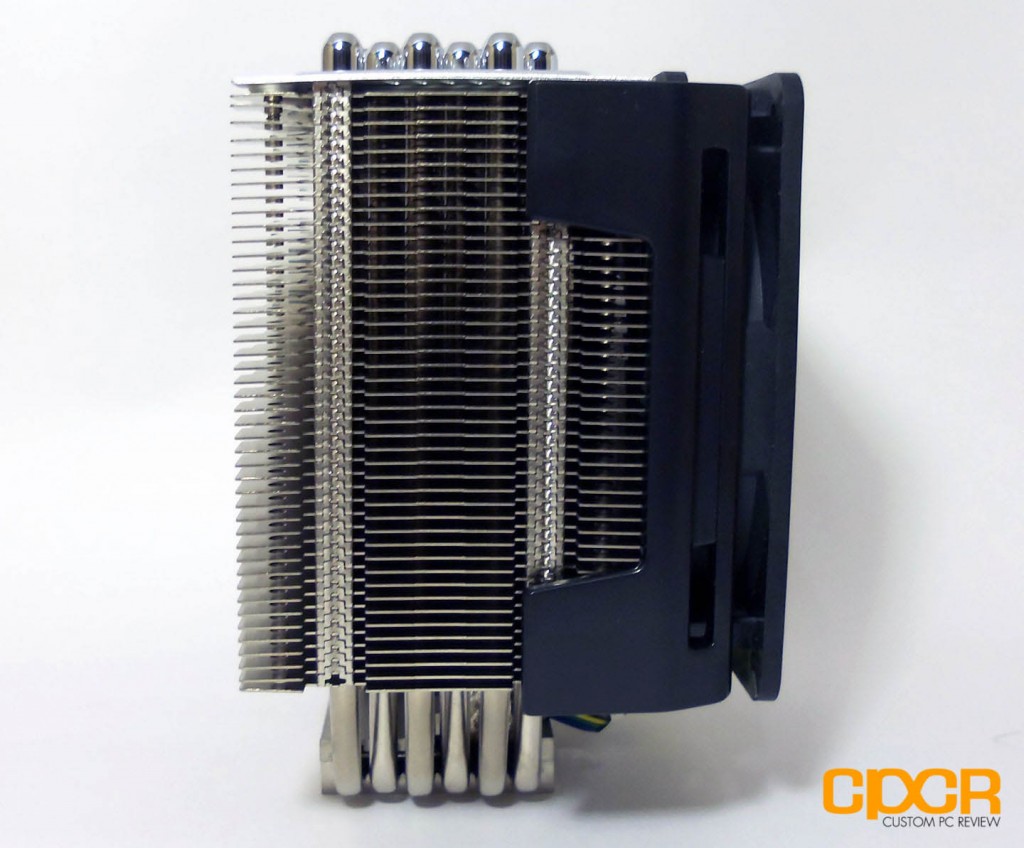 Turning the cooler to the side we can take a look at all the heatpipes. We get six 6mm heatpipes to assist with the vapor chambers. Additionally, we can see that the fins are quite dense as well. 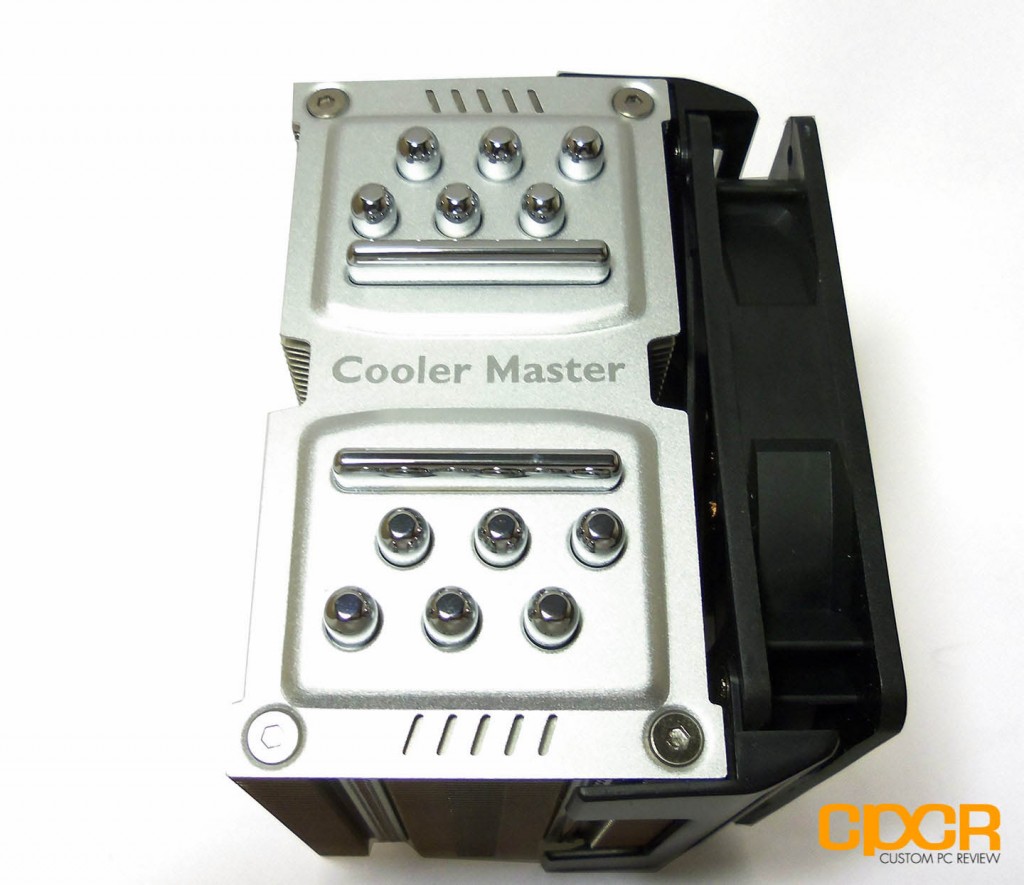 Up top we can see the ends for both the six heatpipes and the two vapor chambers. Here we can also get an idea of just how large the cooler is as well. 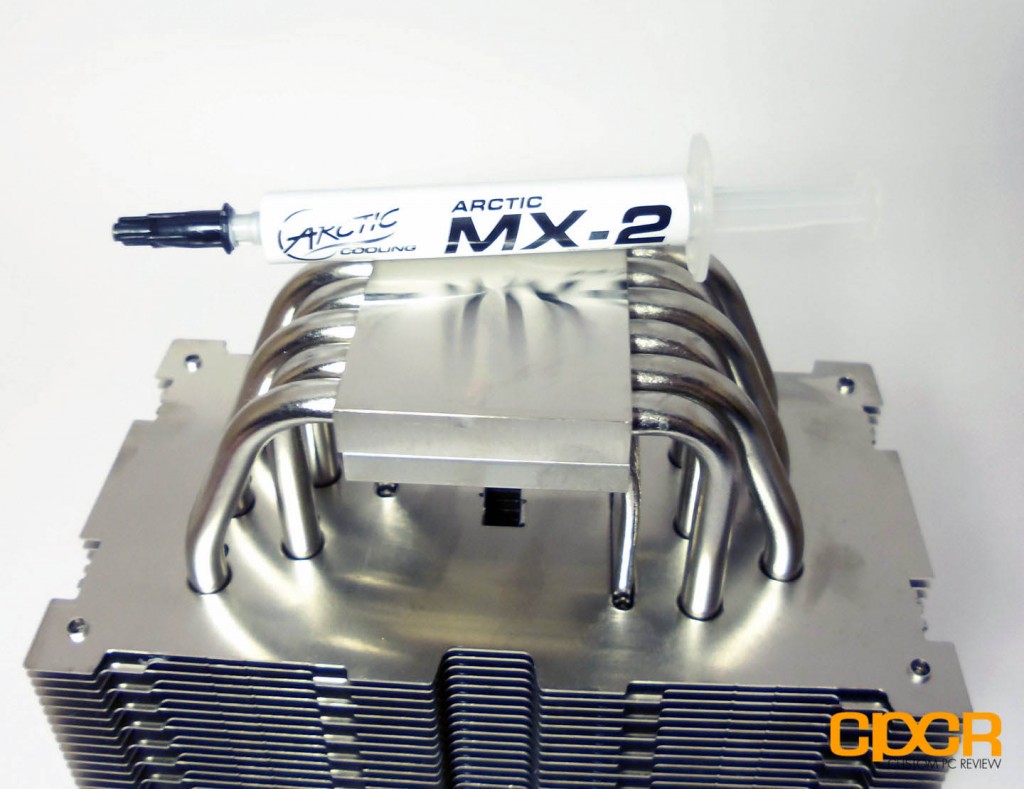 Taking a look at the bottom of the cooler we can see that we have a flat base instead of a direct touch base. The base itself has some machine marks but overall it was very flat. 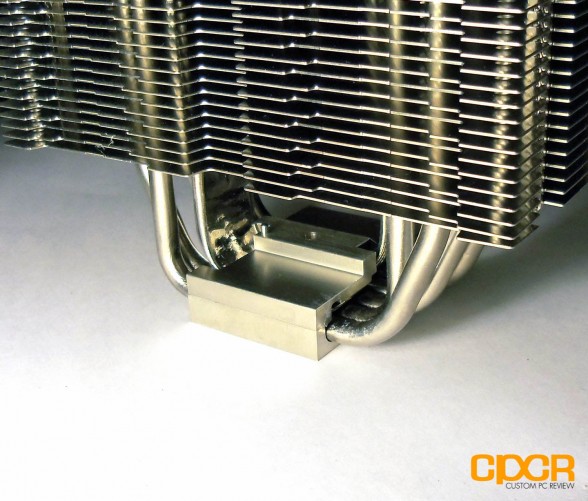 Here you can see one of the vertical vapor chambers that make the TPC 812 so special. It’s pretty much just a flat, bent, vertical pipe running upwards between the heatsink and the base of the cooler. 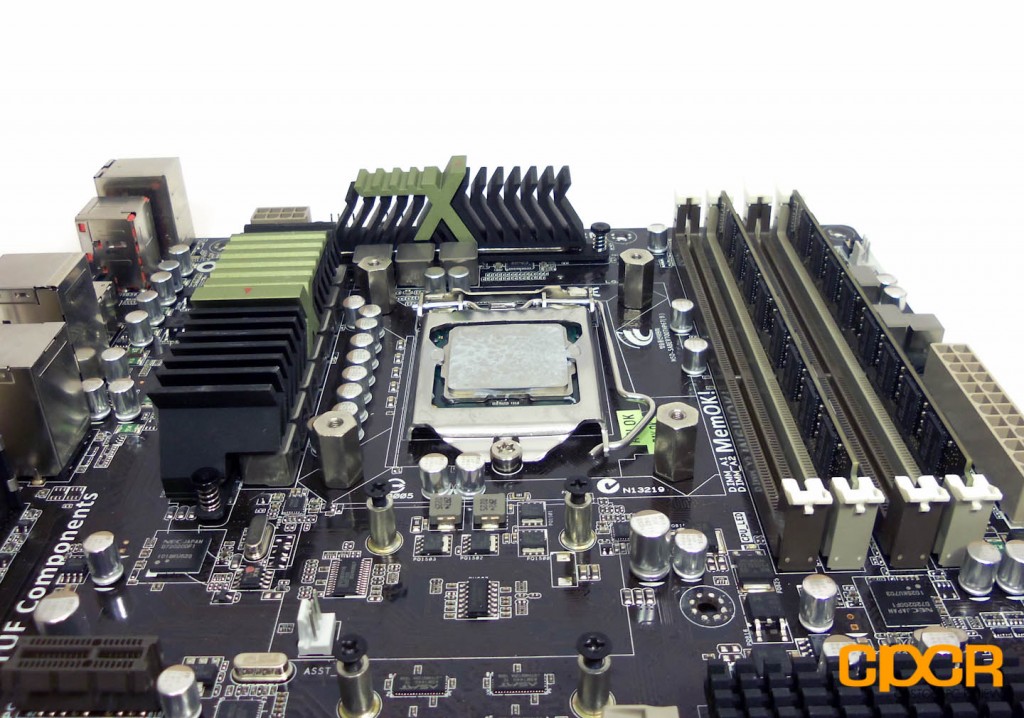 Today, we’ll be installing the TPC 812 onto the Intel LGA 1155 socket. Installation of the TPC 812 is a fairly straight forward affair. You simply install your backplate and then use the supplied nuts to hold the backplate on. 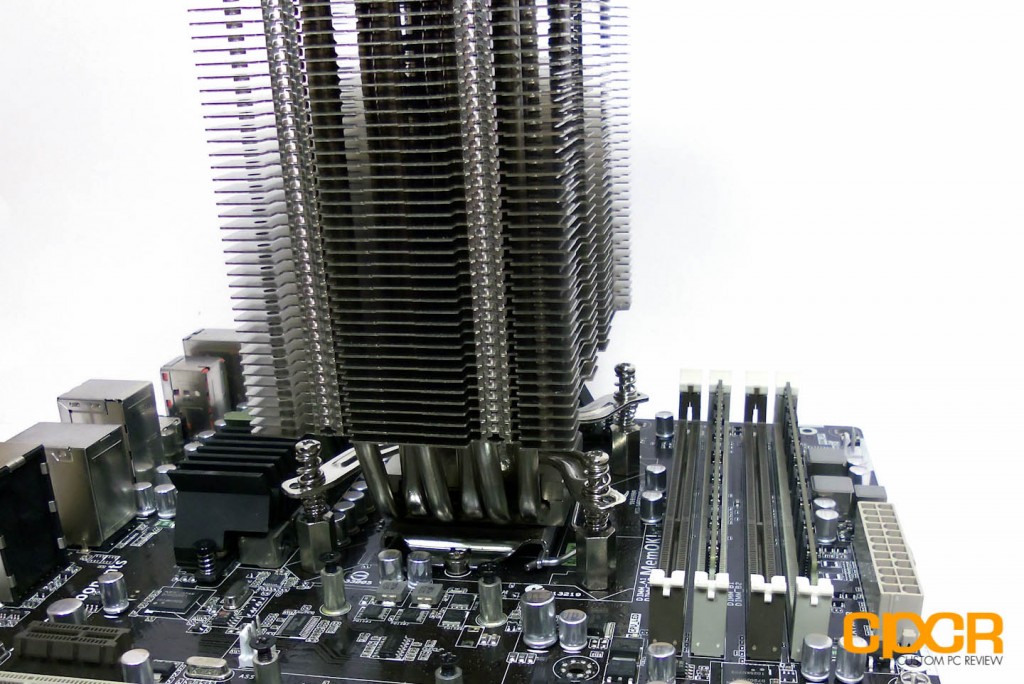 Then you simply screw the heatsink down onto the nuts using the scissor brace. This process is very similar to the Hyper 212 Plus installation process, so if you’re familiar with installing a Hyper 212 Plus, you shouldn’t have any issues with the TPC 812. 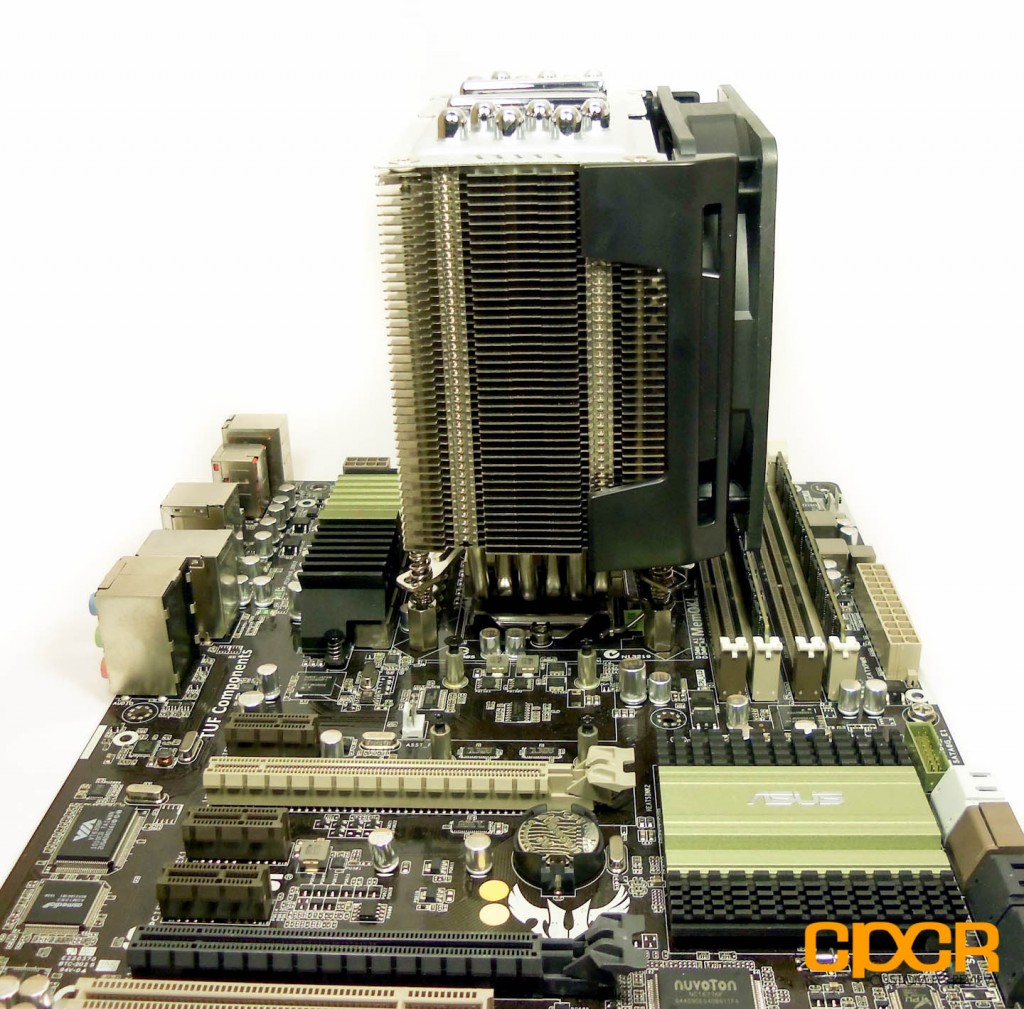 Finally, just attach your fan and you’re good to go. Notice that the TPC 812’s fan will cover the first memory slot if not the first two memory slots (depending on your motherboard), so be aware of that. However, those with fairly low profile memory should have no problems. Here I’ve got 8GB of Samsung DDR3 1600MHz memory, which is just the bare memory modules and they fit just fine. 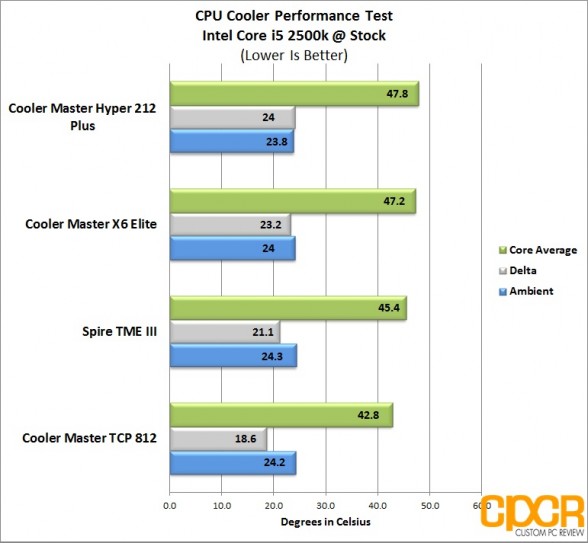 On our stock speed tests we can see that the TPC 812 performed the best out of all four of our coolers that we tested. With a delta of just 18.6 degrees Celsius, it’s definitely able to keep a stock CPU very cool. However most of you don’t care too much about stock speeds, so lets look at how well it performed when we overclocked our Intel Core i5 2500k to 4.8ghz. 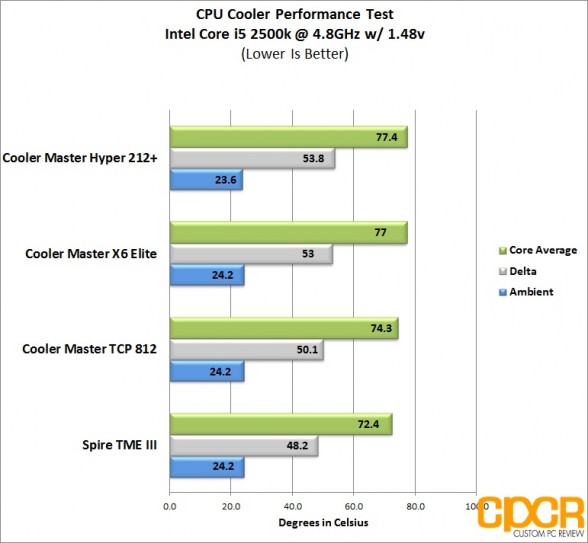 Here we can see that the TPC 812 still did a pretty good job, but it wasn’t able to maintain the top spot on our charts. It was bested by the Spire TME III, which has much larger heatpipes and dual fans in push/pull configuration. Our Cooler Master TPC 812 was able to maintain a delta of 50.1 degrees Celsius, which is still not too bad considering that it was still well within the realms of normal operating temperatures despite the high overclock.

Cooler Master has become quite famous in recent years for making several very well known coolers such as the highly regarded Hyper 212+ known by many as the best budget CPU cooler on the market and from the looks of it, Cooler Master has done it again.

Overall, the Cooler Master TPC 812 has surpassed my initial expectations. For a single 120mm fan cooler, the TPC 812 is capable of holding its own quite well even in comparison to some of the higher end coolers on the market. Those who find themselves in need of some additional cooling power, the TPC 812 also comes with the mounting hardware for a second fan, so you can get a push/pull setup in there if you so desire. The included fan is a PWM or pulse width modulation fan, which means that the motherboard is able to control the speed of the fan to ensure an optimal noise to temperature ratio at all times.

Aesthetically, the TPC 812 has a very unique look to it as well. The vertical vapor chambers add a nice bit of pop to the top of the cooler, as most coolers only show the tips of the heatpipes, or nothing at all. Looking at the top of the TPC 812, we can see all six of the heatpipes as well as the tops of the vapor chambers. The large and solid feel of the TPC 812 let you know that it’s built solid and should be very reliable, definitely up to that Cooler Master quality we’ve come to expect.

Price wise, the TPC 812 is available for $63.99 over at Amazon.com, which puts the TPC 812 at the higher end of the CPU air cooler market. Competitors around this price point include the Spire TME III ($59.95), NZXT Havik 140 ($59.99), Corsair H60 ($60.24), and Thermaltake Frio OCK ($65.99). However, the TPC 812 is slightly quieter than a number of its competitors and has more room for increased cooling capacity as it relies on just a single fan where most others rely on two fans with some even larger fans than the fans on the TPC 812 to achieve the out of the box performance. Speaking of larger fans, it would definitely be nice to see a cooler like the TPC 812 with larger 140mm fans as they do tend to perform better at a smaller acoustic footprint.

The Cooler Master TPC 812 is a very well built, high performing cooler despite coming with only a single 120mm fan. Those looking for a new smaller sized CPU cooler with top notch performance, definitely consider going with the TPC 812.

The Cooler Master TPC 812 is currently available at Amazon.