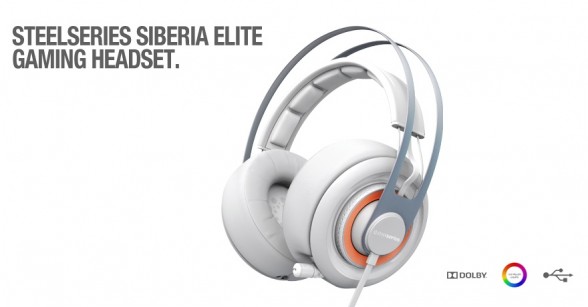 On the second day of the Gamescom convention held in Cologne, Germany, SteelSeries announced their latest gaming headset, the Siberia Elite. The original Siberia Gaming Headset was first introduced in 2004 and quickly rose to fame as one of the most comfortable and best sounding gaming headsets. Since then, SteelSeries has released many iterations of the Siberia, with the Siberia Elite being the newest member of the family.

Compared to the original Siberia, the Siberia Elite’s exterior is receiving a complete overhaul. It interits the large closed-ear earpads from the original Siberia, but they are now made out of memory foam much like the ones found on the SteelSeries 7H. The wildly popular suspension headband also received a bit of padding, and SteelSeries replaced the rubber headrest cable arc with ones crafted out of sandblasted aluminum.  To further enhance its flashy design, two programmable LED light rings have been added to each side of the earcup. To look even a bit cooler, the LED light rings also act as dials for intuitive volume adjustment and the pull-out microphone gets a small on/off LED indicator light as well.

But wait…. there’s more! The Siberia Elite also features SteelSeries’ “next-generation” drivers for superior sound quality and comes with an integrated USB soundcard that’s capable of outputting Dolby Virtual 7.1 sound. Its cables have also been flattened similar to the cables found on the Flux in-ear headphones to prevent any chaotic tangling when they’re sitting in your bag too. Although the cable doesn’t look like it’s detachable, there’s a 3.5mm jack on the right earcup that allows for a second pair of headphones to be jacked into the Siberia Elite for simultaneous audio sharing. Finally for the Siberia Elite, SteelSeries is also launching the SteelSeries Engine 3 desktop client to give users a painless customization experience as well.

The SteelSeries Siberia Elite will be available in black and white, and will be available for pre-order starting September 13th with an MSRP of $199.99. Be sure to hit the jump below for the full press release!

An Iconic and Modern Design Combined with Advanced Audio Engineering, The New Headset Produces an Incredible Experience of Both Sight and Sound

“First introduced in 2004, SteelSeries’ Siberia headset brought together amazing audio quality with first-ever features like a self-adjusting suspension design and circumaural earcups to the market.  The headset quickly became popular amongst gamers with its outstanding quality and performance as well as caught the attention of DJ’s and musicians, appearing in popular videos and in places that expanded even beyond our core gaming audience,” said Bruce Hawver, SteelSeries CEO.  “Siberia is recognized today as one of the fastest growing and highly rated line of headsets by consumers from around the globe. Expanding upon this legacy, today we introduce the next level of Siberia audio combining the acclaimed features, which makes the Siberia brand successful, with the newest and highest-quality audio technology and software that can truly be categorized as Elite.”

SteelSeries’ next-generation drivers are engineered with the learning from over 10 years of delivering premium audio specifically designed for gamers. Equipped with an advanced USB soundcard, the SteelSeries Siberia Elite provides players with a suite of Dolby® technologies that generate realistic surround sounding audio that immerses users into their gaming and entertainment sound. These technologies include:

Available in both white and black, the Siberia Elite Headset includes memory-foam, passive-noise isolating leather ear cushions that rest comfortably around the ears. Its lightweight over-the-head suspension design also has a memory-foam padded headband with a sandblasted steel arc that automatically adjusts to fit the head. The new headset also features illuminated light rings on each earcup that can be customized and controlled to show 16.8 million brilliant colors in a variety of pulsating options. The earcups, in addition to illuminating and housing the speakers, also feature intuitive dials to quickly adjust volume and mute the microphone; furthermore, a light on the microphone provides visual indication when your mic is muted.

Though designed from our heritage in PC gaming, the Siberia Elite is an incredibly versatile device that delivers great audio in all formats. The swappable cable system provides limitless connectivity for PC, Mac®, tablet and phones. More features include:

The SteelSeries Siberia Elite is $199.99 MSRP and will be available for pre-order starting in September 2013. For more details about the new headset, please visit the SteelSeries website here.