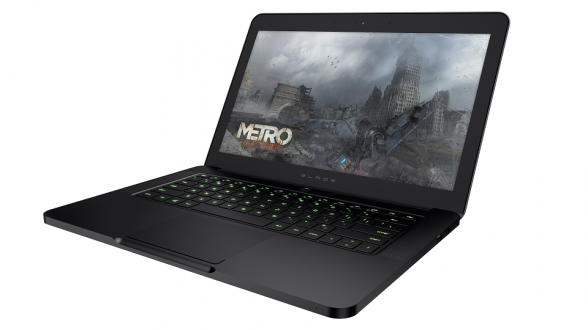 Well, it looks like the crew over at Razer has done it yet again. At a press event at the Dolby Theater in San Francisco, Razer recently unleashed what they’re claiming to be the world’s thinnest and most powerful 14″ notebook on the market – the Blade 14″, and they’re probably right. A couple days ago, Razer released a teaser video for asking gamers “What’s Thinner Than a Dime?” and it seems like the Razer Blade 14″ coming in at 0.66″ thin is what.

Like the original Razer Blade, the Blade 14″ is once again designed completely in house by Razer. Sporting a 14″ 1600×900 LED backlit screen, anti ghosting gaming grade keyboard, an Intel 4th Generation Core processor (aka Haswell), 8GB DDR3L 1600MHz memory, Nvidia GTX 765M & Intel HD4600 graphics (switchable via Nvidia Optimus), the option of a 128GB, 256GB, or 512GB SSD, and a 6 hour battery life, the Razer Blade 14″ is quite phenomenal on paper – especially compared to most of the Ultrabooks on the market, which lack any sort of discrete graphics. In comparison to currently existing 14″ gaming notebooks on the market such as the Alienware M14x (1.49″ thick, 6.45 lbs) for example, the Blade 14″ (0.66″ thick, 4.135 lbs) is considerably thinner and lighter.

The Razer Blade 14″  is expected to be available for pre-order on June 3 and will start at $1,799 via the Razer website. 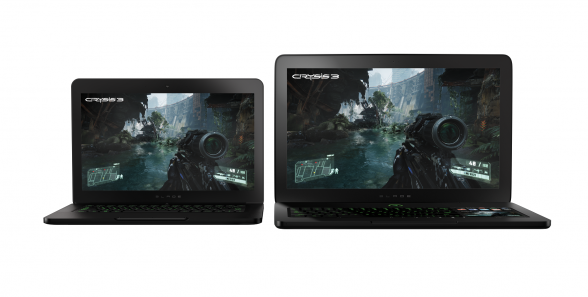 In addition to the introduction of the Razer Blade 14″, Razer has gone ahead and updated the original Razer Blade as well with the same hardware being introduced with the Blade 14″ (Intel 4th Generation Core Processor, Nvidia GeForce GTX 765M). To help differentiate the 17″ and the 14″ Blade, Razer is renaming the 17″ Blade to the Blade Pro and the 14″ will just be referred to as the Blade.

The Razer Blade Pro will be available shortly as well and may be ordered via the Razer website.

The Razer Blade: Thinner than a dime with a 14-inch HD+ Screen, Intel Quad Core i7, NVIDIA GTX 765M

Razer™, the world leader in high-performance gaming hardware, software and systems, today unveiled Razer Blade, the world’s thinnest gaming laptop. The Razer Blade, measuring in at just 0.66-inches thin, packs more power-per-cubic-inch than any other laptop in the world. The Razer Blade is powered with a future 4th gen Intel® Core™ processor,  the latest NVIDIA® GeForce® GTX 765M GPU and utilizes solid-state storage technology with boot speeds of up to four-times faster than a traditional 5400-RPM notebook hard drive. The Razer Blade has a rigid all-aluminum chassis, with a stunning 14-inch LED-backlit HD+ display and features a custom-designed trackpad and backlit gaming grade keyboard.

“We’ve designed and built the thinnest, most powerful 14-inch laptop in the world,” says Min-Liang Tan, Razer co-founder, CEO and creative director. “Thinner than a dime and more powerful than other traditional desktop replacements today, we’ve created an entirely new category of thin and powerful laptops that is generations ahead of other PCs.”

“Incredible innovation is happening across the computing landscape, and the new mobile gaming experience Razer is delivering with the Edge, and now its Blade, is remarkable,” says Navin Shenoy, vice president and general manager of Intel’s Mobile Client Platforms. “Powered by a future 4th gen Intel Core processor, people can expect the highest level performance from the Blade for the most discerning gamer.”

The ultra-portable laptop features 8 GB of fast 1600 MHz DDR3L memory and comes standard with 128 GB of total solid-state storage with options for a 256 GB or 512 GB SSD. The Razer Blade also comes with Dolby® Home Theatre® v4, featuring immersive audio-quality output that is custom-tuned to deliver a cinematic sound experience.

The new 14-inch Razer Blade embodies Razer’s continuing goal to design the world’s best gaming laptops for those that need insanely powerful performance in the thinnest form factors to game anywhere, anytime. Razer sets out to do the impossible without compromising performance and, with the new Blade 14-inch laptop, users are able to game more and do more than ever before on an ultra-portable system.

The Razer Blade will be available for pre-order June 3. For more information, go to www.razerzone.com/blade.

For more information about the Razer Blade, please visit www.razerzone.com/blade.