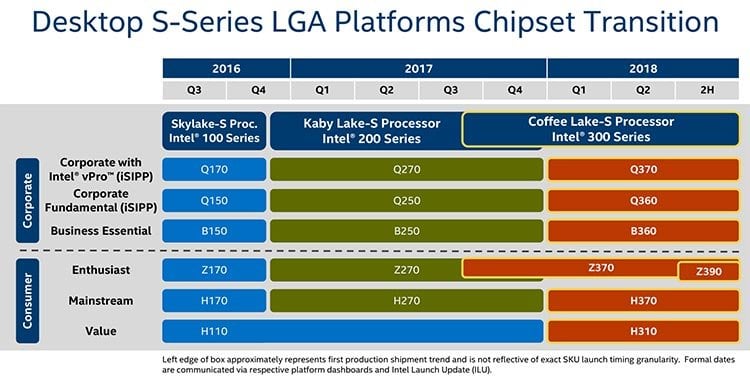 User NVGPU on the AnandTech forums recently posted what appears to be an official slide from Intel showing the upcoming chipset roadmap for 3Q2016 to the 2H2018.

For the 300 series, Intel is updating the entire lineup of chipsets likely due to the new socket being introduced. An interesting new reveal is the flagship Z390 chipset which is expected to be launched in the 2H2018. It’s the first time we’ve seen mention of the Z390 chipset and no further details were made available at this time.

The roadmap is also bad news for those looking to pick up lower cost H370 and H310 motherboards as the roadmap suggests we will only see Z370 motherboards this year. This is expected however as it falls in line with previous rumors stating that Intel will only release multiplier unlocked K SKUs this year. For business users, Intel is also expected to launch corporate oriented chipsets B350, Q360 and Q370 in 2018.